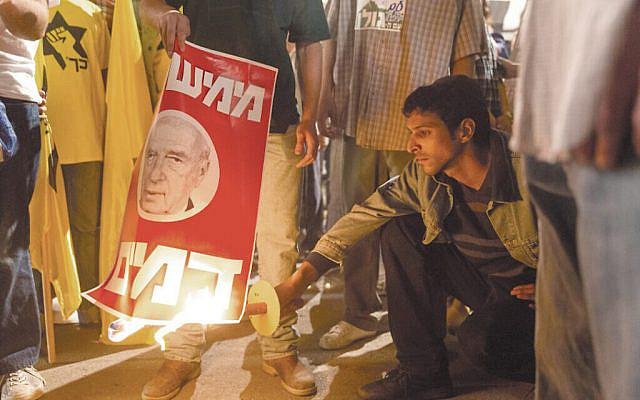 “Yigal Amir is a murderer who shot a bullet into the heart of the nation and did the worst thing possible, kill a prime minister in a democracy. There is no place for a film that tries to understand him or his motivations, or to hint or accuse others of being behind his heinous act.”  –  Israel’s Minister of Culture Miri Regev, September 22, 2019.

The 92nd annual Academy Awards air live from Hollywood this Sunday, but Israel’s entry in the Best Foreign Film category will not win the Oscar as it didn’t make the final shortlist. Incitement, as denounced above by a prominent right-wing government cabinet official, was Israel’s 2019 Ofir Award-winning film, thus becoming a controversial entry to the Academy Awards. To my relief it won’t receive more exposure to the huge international television audience, but not for the reasons Regev announced in her statement above.

Israelis are not especially prone to introspection nor do they come across as overly self-reflective.  Israelis are doers. This is an ain baya society. A society that prizes action, accomplishments and results. Do it now and apologize for not asking permission later, if at all. A film tracking the two years of mental, emotional and practical preparation that brought Amir to his 1995 heinous act of shooting Prime Minister Yitzhak Rabin in the back, are unusual subjects for a feature film.

It’s very uncomfortable then, to spend two hours in the mind of a young Israeli who had a fairly typical religious Jewish upbringing by first generation Yemini-Israeli immigrant parents. In fact, it was so uncomfortable for the acclaimed talented leading Israeli actor who portrayed Amir, he had to seek therapy after filming ended to recover his equilibrium.

The average Israeli or friend of Israel might feel the same way, therapy to make sense of a society which birthed/raised/educated/sustained a young Orthodox Jew, who became the assassin of the man whose life was the very embodiment of much of what is celebrated about Israel’s founding generation. Yitzhak Rabin’s life demonstrated a huge personal commitment to the realization of the miraculous progress into the thriving first-world country Israel is today. Yet the introspection at the center of the film reveals a very uncomfortable truth.

Few are willing or interested in facing, let alone displaying to the world, the reality that Israel’s military government oversight of 2 million West Bank Palestinians along side the settler movement, have resulted in a long term moral corrosion within newly fanatical and religiously zealot segments of the society. The film tracks Amir as he consults with both religious and nationalist fanatics seeking guidance for his conception that killing Rabin to stop the Oslo peace process, was permitted by Jewish law. None attempt to dissuade him, or even question the decency of the very question.

According to some film critics, Incitement’s film maker Yaron Zilber took a risky tack in deliberately presenting the assassin as the central character of the film, which might “elicit admiration for the wrong character.” And, although we already know the movie’s catastrophic finale, we root for a different result all along the way.

Rabin assassination was an earthquake and deep wound to the heart of Israeli society and democracy, which continues reverberating today nearly 25 years later. In fact, contrary to Minister Regev, this is the place for a film which tries to understand Amir and his motivations. It’s past time for Israel to look inside and ask itself if society has learned any lessons, and it shouldn’t require an Academy Award nomination to do that.

Postscript: If it was up to me, Israel’s talented film makers and the home grown industry would be represented by Golda this year, more about that extraordinary film in my next post.