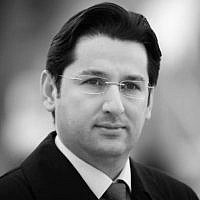 The Blogs
Aykan Erdemir
Apply for a Blog
Please note that the posts on The Blogs are contributed by third parties. The opinions, facts and any media content in them are presented solely by the authors, and neither The Times of Israel nor its partners assume any responsibility for them. Please contact us in case of abuse. In case of abuse,
Report this post.

Turkish and Israeli negotiators are having talks at an undisclosed location in pursuit of a reconciliation agreement to resume normalized relations. Both countries have a lot to gain from détente, and any step toward easing tensions in the Middle East should be cause for celebration. As a former member of Turkish Parliament, who has vocally supported closer Turkish-Israeli ties and a “peace pipeline” carrying Israeli gas to Turkey via Cyprus, it is encouraging to see that the talks that started in June 2015 have come this far. However, I have serious concerns about the shaky foundations of Turkish-Israeli rapprochement, and remain unconvinced about its sustainability.

Turkey’s government mouthpieces – notorious for their anti-Semitic and anti-Israel vitriol – seem to be in a celebratory mood about the apparently impending reconciliation. A pro-government daily, for example, published not only a front-page endorsement of normalization but accompanied it with news of Turkish President Recep Tayyip Erdoğan’s plans to serve as a witness at a wedding in an Istanbul synagogue. Last week, the media ran similar praise for Erdoğan’s meeting with Jewish-American leaders during his Washington visit.

Such positive coverage is an extraordinary development in a country that, according to the Anti-Defamation League, harbors higher levels of anti-Semitism than Iran. The U-turn of the pro-government media, which only a year ago aired a documentary alleging a millennia-long Jewish conspiracy to dominate the world, is curious, to say the least.

Also curious are the new public-diplomacy efforts at the Foreign Ministry. Ankara’s consulate and congregants of a Modern-Orthodox synagogue in New York will co-organize a conference this Sunday on the “Inclusion and Prosperity of Ottoman Turkish Sephardi Jews.” The conference marketing proudly features a photo of the recently restored Grand Synagogue in the city of Edirne, which is being billed as a monumental testimony to the Turkish state’s embrace of its Jewish citizens. Somehow, the conference organizers neglected to recall the Edirne governor’s appalling pledge that he would not allow Jews to worship in the synagogue, let alone the 1934 pogroms that cleansed the area from Jews in the first place.

Erdoğan’s Islamist-rooted Justice and Democracy Party (AKP), which has ruled Turkey since 2002, is attempting to paper over some ugly truths. The AKP is desperate to overhaul its failed foreign policy – including an ongoing crisis with Russia, fear of Iran’s rising regional hegemony, and the collapse of Turkey’s vision for Muslim Brotherhood rule in Egypt and Syria. With its list of regional enemies mounting, the AKP hopes to steer Turkey back to its traditional allies: the European Union, NATO, and Israel. This is why Erdoğan recently toned down his anti-Western rhetoric and miraculously come to appreciate the transactional relationships he can establish with pragmatic counterparts, rather than the Islamists he was courting just months ago.

Turkey’s government, however, still offers frequent reminders of its hypocrisy on Jews and Israel. Following last month’s suicide bombing in Istanbul, a board member of the AKP’s women’s branch in the city tweeted her wish for the wounded Israeli tourists to have been killed. A few weeks before, a chief advisor to the president appeared in pro-government media to attack political rivals as “raising soldiers for the Jews.” The board member had to leave her post but the chief advisor is still serving.

For those of us committed to combating prejudice against Turkey’s minorities, the current state of affairs poses a particular challenge. In the run-up to the Turkish-Israeli rapprochement, Turkish analysts are expected to turn a blind eye to years of anti-Jewish and anti-Israeli propaganda disseminated by Turkey’s top officials and their mouthpieces. But it would be a mistake to do so.

A Sephardic friend of mine once told me her parents raised her in accordance with kayades, a Judeo-Spanish word for Turkish Jews’ code of silence in the face of discrimination. Today, those seeking to point out the disingenuous premises of Erdoğan’s reconciliation attempts are forced to wrestle with kayades once again.

Thankfully, some Turkish citizens have already made the right choice. On this year’s International Holocaust Remembrance Day, a handful of Turkish Jews and their non-Jewish friends launched Avlaremoz, a news site dedicated to combating anti-Semitism in Turkey. Avlaremoz means “Let’s talk” in Judeo-Spanish, and is a direct challenge to kayades. As expected, Avlaremoz was one of the few news outlets that covered the Erdoğan advisor’s remarks.

Turkish-Israeli rapprochement is important for regional stability. A sustainable relationship, however, cannot be built on hypocrisy and silence. Turkish society needs to recognize and confront the pervasive anti-Semitism and anti-Israeli sentiment that has taken hold of wide segments of the population, due in large part to the influence of the AKP. A future built on dialogue must start with genuine conversation about the wrongs of the past, but also about the dangerous politics that have led us to this perilous present.

Aykan Erdemir is a senior fellow at the Foundation for Defense of Democracies and a former member of the Turkish parliament. Follow him on Twitter @aykan_erdemir.

About the Author
Aykan Erdemir is a senior fellow at the Foundation for Defense of Democracies and a former member of the Turkish parliament.
Comments