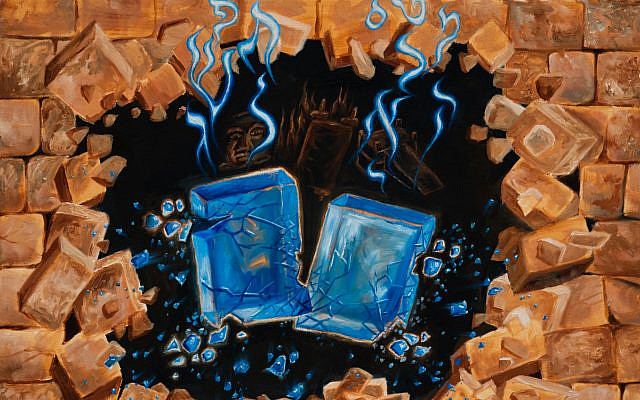 The shattering of virtual realities. Artwork by Avital Sheldon.

The Fast of Tammuz is Reality Check Day.

It recalls that horrific moment when the Romans breached the walls of Jerusalem, taking the suffering of the Jewish People to a new depth.

Imagine the shock. We have lived under siege for a year and a half, getting used to a terrible new normal. Now, the Romans are inside the Holy City, wreaking death and destruction wherever they can lay their hands.

The 17th of Tammuz would, forever, be bound up with the story of national tragedy. Or to be accurate, its association with tragedy was intensified — as this date was already a deeply sad one for our People.

On this day, at Mount Sinai, Moses smashed the luchot, the two tablets of stone, in front of the entire People. Shattered stones certainly appear to be a common theme here. He did so after witnessing the shocking sight of the nation worshiping a golden calf. It was a lapse during which the People’s action was unimaginably misguided. At Mount Sinai they saw reality; less than six weeks later they opted for a form of virtual reality.

It was just forty days after they underwent a privilege that no other generation has ever experienced. But then, they convinced themselves that Moshe, who had ascended the mount, wasn’t coming back. They declared him “missing in action,” and they couldn’t imagine continuing without him. So they replaced his physical presence with a golden calf and proceeded to idolize it with song, dance and sacrifice.

These luchot that now lay in smithereens had been truly miraculous. Engraved the whole way through by Hashem’s own hand, they could be read from all sides, with the middle of some of the letters being suspended in mid-air.

Our Torah stems from the revelation at Sinai, when Hashem manifested Himself in the world, and our task ever since has been to allow His words to permeate our lives. Put simply, our job is to bring Hashem’s word into human life rather than to leave it as some theoretical and ethereal construct.

There are those who go further and maintain that, when Moshe saw the golden calf, the miraculous letters were “released” by Hashem and so they flew off by themselves” (Pirkei De Rebbi Eliezer 45). These divinely-inscribed letters could only remain as long as the writing would penetrate the stone from all sides. The moment the Jewish People worshipped the calf, that fidelity was lost and the letters flew away. As a result, the luchot became too “heavy” for Moshe to bear and they came crashing down at the bottom the mountain.

It can be hard to mourn for the tragedy of the luchot and the breaching of Jerusalem’s walls on the same day. After all, they are such different events. But when we look deeper, we see a common pattern, and a very strong message for us today. We are propelled to ask ourselves tough questions. What can truly give us security, and reassure us? And when are we investing false hope? How do we distinguish between authentic reality and its virtual substitutes?

The residents of Jerusalem expected the walls to protect them. They were disappointed. The nation at Sinai placed their trust in Moshe above Hashem and when they thought they had lost his protection, built a golden proxy. The virtual had now replaced the real; this was a critical error with eternal consequences.

In both eras, the people were corrupted by inauthenticity. At Sinai, this was the failure to stay focused on the Divine plan that was unfolding before them, instead placing their hope in a glistening image. In Jerusalem, we were similarly distracted, and became insincere in our relationships, during the first Temple with Hashem, and during the second with each other.

The letters of the Torah had failed to permeate in to their consciousness to the point where Hashem rebuffed their lip service saying, “I don’t need your sacrifices… who asked you to trample My courtyards?” (Isaiah 1:11-12). In other words: don’t bother yourselves if you can’t operate from a place of truthfulness and sincerity.

Our calling as a nation demands that we be people of thorough integrity of thought and action. The 17th of Tammuz marks the loss of two of the greatest privileges granted by Hashem to the Children of Israel — the miraculous first luchot, and autonomy in ancient Jerusalem.  Such luchot were never seen again, And, just three weeks after the breaching of Jerusalem’s walls, the Temple was destroyed.

Genuine relationships require real connection. The Fast of Tammuz is a call to that reality; to distinguish between that which is authentic and that which is virtual, because all that glistens is not gold.