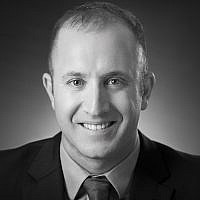 The Blogs
Mati Gill
Apply for a Blog
Advertisement
Please note that the posts on The Blogs are contributed by third parties. The opinions, facts and any media content in them are presented solely by the authors, and neither The Times of Israel nor its partners assume any responsibility for them. Please contact us in case of abuse. In case of abuse,
Report this post.

When the Israelites gathered at the foot of Mt. Sinai they stood together, “As one people with one heart.” (Shemot 19.2).

As a proud Jew and American-Israeli living over two decades in our Jewish State, I share the sense of betrayal of both Jews abroad and in Israel by the government’s recent delegitimization of non-ultra-Orthodox Judaism.

Narrowly defining who is a Jew, Israel has veered sharply away from the intent of the Zionist movement: to create a homeland for us all.

The majority of my career in and around the Israeli political arena has shaped my understanding of strategies for driving local policy change. I want to offer a blueprint for turning our feelings of betrayal into effective action.

First off, let’s start with what doesn’t work: threats of boycotts. Boycotts do not and will not drive change in Israel. Backs pressed to the wall, Israelis take an “us versus them” approach.

For inclusive ideals to again guide Israel’s path, world Jewry requires a new political agenda validating our identity and proving our contributions to our People. Our best counter to the government’s decisions is to build common interests. “They go low, we go high” is the path forward.

Fortunately, there is no need to reinvent the wheel in order for us to succeed. Application of basic political advocacy tools can guide our blueprint for change. Our task is to articulate a concrete agenda with practical, achievable goals taking maximum advantage of the opportunities that the Israeli political arena offers.

Whenever Israel has faced security or humanitarian crises, world Jewry has responded with tremendous support for our State and its people. This is no different. This is also a crisis. An identity crisis. And we must organize and mobilize accordingly.

This will require financial support to level the playing field with those, unlike us, who receive massive government support for their cause. If we are serious, we will need the resources to fund our plan of action. And I have no doubt that a compelling plan will attract the necessary support.

1. Create a political agenda. First and foremost, a clear, positive ideological agenda that all constituencies can identify with must be built. The agenda must reiterate the core values upon which Israel was born. For reference, read Israel’s Declaration of Independence. It is eloquent in its articulation of Zionist values’ inclusion of all the Jewish People.

To move the needle and build a sustainable voice for world Jewry in Israel, I suggest the following 10-step blueprint for action:

2. Be proud and outspoken. Highlight the role of the broad diversity of Jewish identity in our ability to survive, if not thrive, for two thousand years in the Diaspora. Inclusion, openness and adaptation have been the key to our survival as a global Jewish people throughout the millennia.

3. Build a center to promote our agenda. Align ourselves with a first class Israeli think tank to develop and promote Jewish diversity and its utter necessity for global Jewish unity and progress. One of the key roles of the center would be to promote the linkage of Jews throughout the world-in Israel and abroad-with Zionism and modernity, and the open culture that the founders such as Ahad Ha’am envisioned.

4. Collaborate with the Hebrew media. Identify key partners in this most influential group in the Israeli public arena. Educate them about Diaspora Jewry’s issues of strategic importance, speak at their conferences, help them share and promote our beliefs. The English Israeli media are important for outreach. However, to truly influence opinion, it is vital to engage with the Hebrew language media, especially social media. It works.

5. Form a lobby. Build a political lobby in the Knesset with senior Israeli politicians. Keep it active between visits to Israel and local community meetings. Hire a full-time expert political operative to run the lobby with a team of political staffers. This must be a day in and out serious professional operation that is not aligned with, let alone controlled by, any one movement or religious stream. We defeat ourselves when we divide ourselves. Unite! Check our multitude of brands at the door, and prove to our brethren in Israel and abroad that this crisis must be met with unified action.

6. Operate like a PAC. Put our money where our hearts are. Did you know that Israeli law permits political contributions from abroad to Israeli politicians and their parties? Cease supporting candidates and parties failing to promote our issues. Increase our contributions to candidates who openly represent our interests in order to help them succeed in Israel’s complex and highly competitive political arena.

7. Organize. Our constituents in Israel and throughout the world need a clearly focused operational entity. Within it, we can better educate leaders and the masses about our issues and mobilize ourselves to defend our core Jewish and progressive values.

Israeli citizens, not only politicos, must be an integral part of this plan and unified force for change. Too many of us Israelis are finding ourselves travelling to Cyprus to wed. We pay taxes, we vote, and our voices will and must be heard.

8. Target local leadership. Build relationships with powerful Israeli municipality leaders, such as those receiving your twinned city or community support. Their policies and projects tangibly affect local lives. Building legitimacy and grassroots support with mayors, heads of regional councils and municipal council members will also prepare them to share our concerns in their future decision-making on the national stage.

As Israel’s government is a large entity with many parts, scour the landscape for crucial allies from within and identify areas for collaboration to amplify our voice.

9. Strength in Numbers: Let’s remember how former refusnik Natan Sharansky, upon release from prison and subsequent Aliyah, helped rally the masses to march on Washington, D.C. in 1987 for Soviet Jewry.

As a boy, I remember this Jewish hero coming to Columbus, Ohio to inspire us to believe that the impossible could in fact become possible if we rallied together in support of a historic, all-important cause.

Let’s take up the challenge of bringing out the masses , from here and abroad, to come to Jerusalem and Tel Aviv, rallying and marching for change.

10. Resource it. Increase support to Israel, to represent your core values, rather than threaten to pull support. Don’t give up on us!

Double down, and do so for the long-haul. Keep faith in Israel’s exceptional ability to pivot and rapidly advance in new directions.

Friends, we can do this. And we must do this right now. Beyond the growing sense of urgency, a unique window has opened for change. The media is reporting on this critical issue. People are paying attention in increasing numbers. My generation of Israelis care, as do many of our parents. The opportunity for discourse and decision-making about issues of Jewish identity in Israel has never been greater.

The founders of Zionism and the State of Israel all shared a vision – to build a sovereign state that will serve as a light amongst the nations.

To realize this vision, the State of Israel must serve as the homeland of the entire Jewish people. Let us unite, work arm in arm, to make this a reality. “If we will it, it is no dream.”

Mati is an American born Israeli currently living in Tel Aviv, married and father of three. He is an executive at one of the leading industrial companies in Israel and served as Bureau Chief of the Israeli Minister of Public Security and is a Major (res.) in IDF. An Israeli social entrepreneur, Mati co-founded the “Sanhedrin Forum” for young Israeli professionals

About the Author
Mati is an American born Israeli currently living in Tel Aviv. He is an attorney at one of the leading industrial companies in Israel and previously served as Bureau Chief of the Israeli Minister of Public Security and is a Major in IDF reserves. A social entrepreneur, Mati co-founded the "Sanhedrin Forum" for young Israeli professionals
Comments