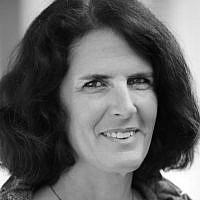 The Blogs
Rachel Adelman
Apply for a Blog
Please note that the posts on The Blogs are contributed by third parties. The opinions, facts and any media content in them are presented solely by the authors, and neither The Times of Israel nor its partners assume any responsibility for them. Please contact us in case of abuse. In case of abuse,
Report this post. 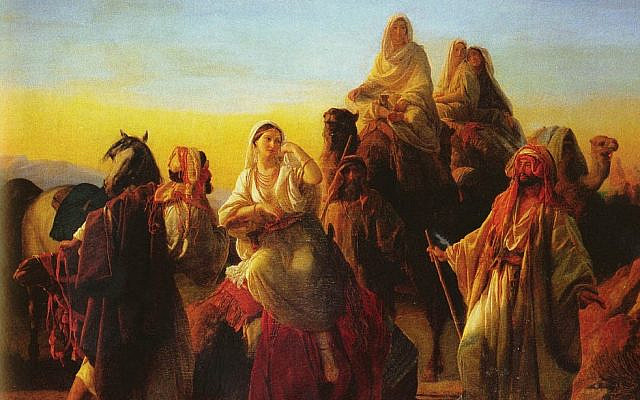 From 'Isaac and Rebecca,' by Friedrich Bouterwek, 1840. (public domain)

In this week’s Torah reading, Parashat Toledot, Jacob dupes his blind father when he poses as Esau, the firstborn, in stealing the patriarch’s blessing. Yet it is his mother, Rebekah, who initiates the deceit, enacting what she believes is God’s will. She alone had been privy to the oracle when the brothers were still rivals in utero: the twins born to her would establish two nations, two separate and divided people, and “the elder would serve the younger” (Gen. 25:23). Given the significance of the prophecy, why did Rebekah not immediately inform Isaac, her husband?

Further, when the patriarch called upon Esau, perhaps decades later, to hunt and to prepare game for him so that he might bestow the blessing upon him, why did Rebekah not tell her husband then? She should have corrected him and told him: God favors the younger son! Instead, she turns to deceit, dressing Jacob in goatskins and Esau’s choice clothing (27:15-16). Surely, “lying lips are an abomination to the LORD, and those who act faithfully are His delight” (Proverbs 12:22). While the consequences of the deceit are calamitous for Jacob, they are even more so for his mother. He must flee from Esau’s murderous rage, exiled from home for over two decades, with poetic justice meted out to him in Padan-aram. But Rebekah’s fate is worse. Indeed, the hypothetical curse that Jacob had feared (Gen. 37:13) falls upon her for she never sees her beloved son again. So why resort to such desperate, (dare I say) unethical measures?

To quote Thomas Mann: “It is possible to be in a plot and not know it” (Joseph and His Brothers). Isaac seems to be an unwitting players in God’s plot, while Rebekah is clearly in on the divine plan. I trace the gap between Rebekah and Isaac’s perspectives to their first meeting. Coming from Be’er La-Hai Roi, Isaac raises his eyes and sees camels in the distance while Rebekah raises her eyes and sees him and falls from her camel (25:63-64). Perhaps early myopia has set in for the patriarch. He sees only the silhouette of camels darkly etched on the horizon of sand dunes. She sees him, and upon being told by the servant that “that man over there” is the one she is destined to marry, she veils herself. What does she see that so stuns her? There, set against the light of the dying day, stands a man most holy, other-worldly, perhaps marked by the trauma of the near-sacrifice on Mount Moriah.

Ha‘amek Davar (the Torah commentary of the Netziv, Rav Naftali Zvi Yehuda Berlin), suggests that she is overcome with fear and, out of modesty, considers herself unworthy of him, and so covers her face. The “fear of Isaac [pachad Yitzchak]” marks their relationship from that moment onward. As a consequence, she is not forthright with her husband as Sarah is with Abraham (Gen. 21:10) or Rachel with Jacob (Gen. 30:1). Divine providence ensured that Rebekah would arrive at precisely that moment, imprinting her with awe-of-the-husband, so that later events would transpire according to God’s will (against the conscious will of Isaac). Paraphrasing the poet Pádraig Ó Tuama, we learn most from the situations we do no choose (“The Facts of Life”). From that moment onward, Rebekah perceives more than her husband, who lacks both sight and insight, for Isaac loved “Esau because he had a taste for game,” while Rebekah loved Jacob (Gen. 25:28). The text doesn’t tell us why Rebekah favored Jacob. But we know that she alone was privy to God’s will; her heart (like God’s) was with the tent-dweller, with the smooth one, the blameless man of integrity [ish tam].

Yet this reading — that Rebekah was marked by the fear of Isaac — has become less compelling to me over the years, as I understand her character over the arc of her life. From the time we first encounter her at the well, watering all those camels, she is strong and generous and forthright. When asked by her father and brother whether she would go with the servant to a strange land to marry a man she had never met, she answers simply (in the idiom of God’s command to Abraham lekh lekha): “I will go [’elekh]” (Gen. 24:58). She is hardly a shrinking violet!

In contrast to the Netziv, I read Rebekah’s veiling at their first encounter as a subtle assertion of her own initiative. The scene may be likened to the badeken ceremony at Jewish weddings, when the bride is veiled before the huppah (marriage canopy), a custom that can be traced back to Ancient Near Eastern traditions (such as the Mari texts circa 3rd millennium BCE). The veiling of the bride confirmed betrothal and was initiated by the groom or his family well before the wedding. The veil signified that the young woman was now exclusive to the groom and served as a symbol of her chastity (see Isaiah 47:1-3). Yet, remarkably, Rebekah (when told that “that man over there” would be her husband), veils herself. Ironically, rather than a symbol of the groom’s exclusive right to the bride, here the veiling signifies the murmurs of Rebekah’s independence. From the moment she draws the scarf down over her face, she maintains the asymmetry of sight and insight between herself and her husband: he “raised his eyes and saw camels coming. And Rebekah raised her eyes and saw Isaac” (Gen. 24:63-64). The veiling anticipates the three times she strikes out on her own, beyond the purview of her husband: when she consults God over the tumult in her belly and is told of the fate of her two sons (25:22-23), when she prompts Jacob to deceive his blind father in stealing the blessing (27:5-17), and when she concocts a cover story as to why the blessed son must now leave for Padan-aram (27:47).

From Rebekah’s first veiling and dressing Jacob up in goatskins, the sequence of masks reverberates on. Leah is veiled when she poses as Rachel under the wedding canopy. The next morning, Laban ironically quips: “it is not done in our country, to give away the younger before the first born” (Gen. 29:26), as if to say: “While you posed as the older son usurping the blessing, we don’t displace the right of the first born here!” Jacob’s sons then dupe their father with Joseph’s cloak dipped in goat’s blood (37:31-32). Tamar also dons a veil and sits at the crossroads of Enaim in harlot’s garb in order to seduce Judah, her father-in-law and Jacob’s son (Gen. 38:14). Tamar and Judah beget the ancestor of the Davidic monarchy, the line leading to the Messiah.

Like other biblical women, Rebekah chooses the circuitous path, what I have called “the female ruse,” and God allies with them. “It is possible to be in a plot and not know it.” Yet, the woman seems to know, forging a path as a female prince through the brambles, the thorns and thistles of history, towards Sleeping Beauty, towards the Final Awakening.

About the Author
Rachel Adelman is Associate Professor of Tanakh at Hebrew College in Boston. She lectures widely in North America and abroad, and has published poetry, articles, divrei Torah, and books, most recently: The Female Ruse — Women’s Deception and Divine Sanction in the Hebrew Bible (2015).
Related Topics
Related Posts
Comments