The Blogs
Shmuel Polin
ניט מיט שעלטן/לאַכן קען מען די וועלט איבערמאַכן
Apply for a Blog
Please note that the posts on The Blogs are contributed by third parties. The opinions, facts and any media content in them are presented solely by the authors, and neither The Times of Israel nor its partners assume any responsibility for them. Please contact us in case of abuse. In case of abuse,
Report this post.

In this week’s parsha, we read about our people moving from campsite to campsite. Specifically, the Torah portion notes the Levites, who are tasked with serving the sanctuary and are also tasked with dismantling and transporting the sanctuary. They erect their own tents around the new sites. Amongst the Levites, the families of the Kohatites, Gershonites and Merarites are all tasked separately as part of this process.

Earlier this month, I met with congregants at our monthly town hall meeting of Adath Israel Congregation of Cincinnati. There were many questions about the artistic work I have been doing over the past few months.  As a result, I decided to share more about my work online, and also how it relates to this week’s parsha.

The Torah’s description of the transportation of the sanctuary relates to something I am currently involved with. In 2020, I embarked upon a project, now known as the “Opening the Ark Project.” The project is about rebuilding one of the great wooden arks from one of the great wooden synagogues of the Polish-Lithuanian commonwealth, right here in Cincinnati. I chose to guide and undertake the project because I am an artist and my father is an artist. From straw polls done in the Cincinnati Jewish community, Jewish artists, carpenters, contractors and architects feel they could be utilized more in Jewish life. 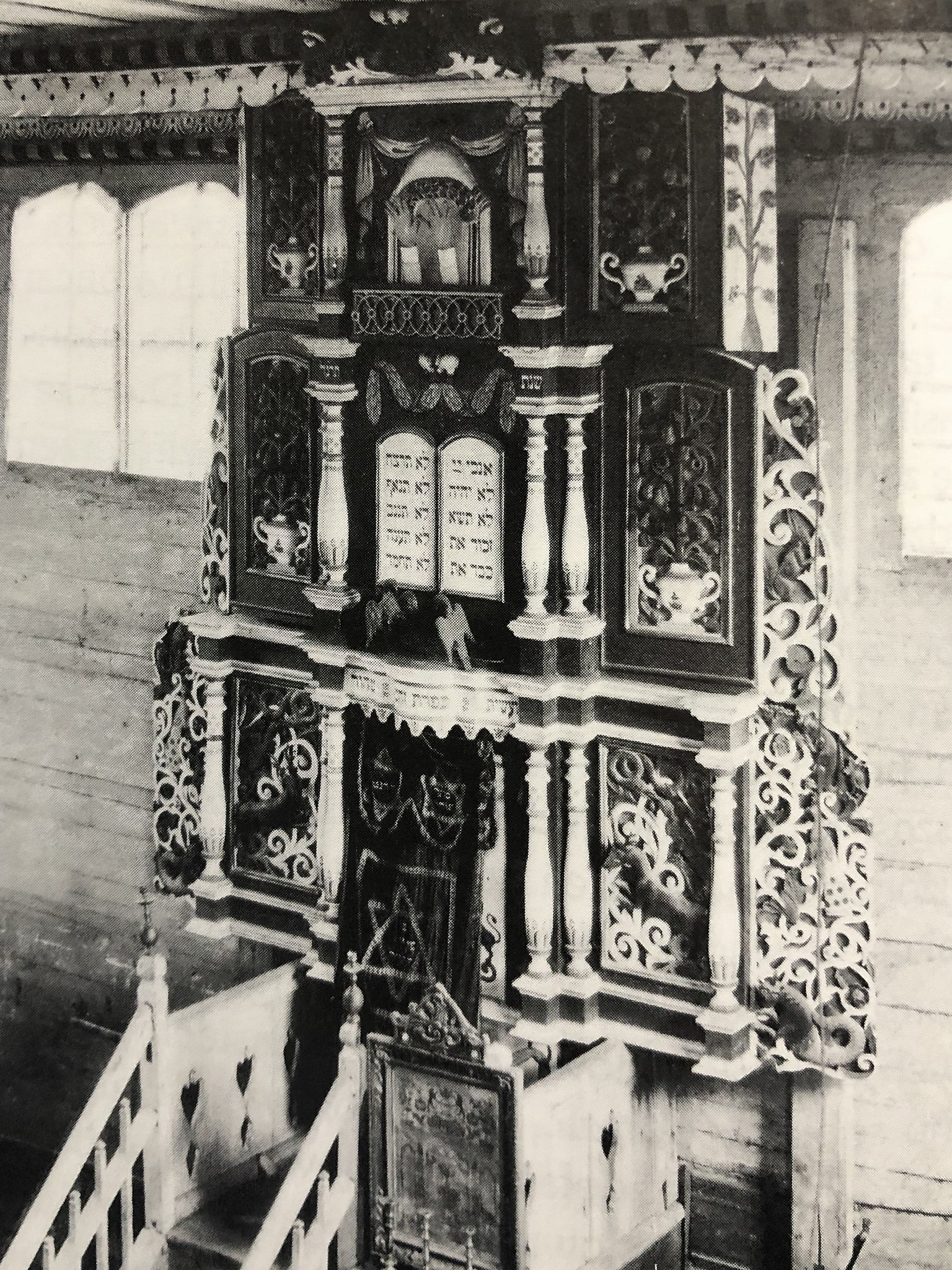 The Aron Kodesh being rebuilt in Cincinnati. The photograph was taken in Poland before 1942.

Furthermore, the project speaks to the needs of Holocaust education. The ark chosen for the project was one of the jewels of world Jewry, and the Nazis destroyed it in 1942 in Poland. It was towering and coated in vibrant colors. With Polish, Sephardic, and Russian influences, it stood as a testament to Jewish dialogue and Jewish art, artistry and carpentry.

The reconstruction effort is a great way for people to enhance their relationship with Judaism through the medium of art. As a matter of engagement, the project reaches inside (and even, potentially, outside) our Jewish community and involves people in new ways. From architects providing blueprints to digital colorists to artisans and artists who will paint the ark, Jews—and even some who are adjacent to Jews—will be involved in this project. So far, we have woodworkers and painters who have already volunteered entire months of their summer. The excitement in their eyes is powerful!

Just as we are going to have a diverse group of people working on this ark, so too the Torah describes the communal orientation toward the construction of the Israelites Ark and Mishkan. Recall that in Parshas, Terumah, Tetzaveh, Ki Sisa and Vayakhel-Pekudei that it was not one person, but a community, that physically joined together to build the Ark and Mishkan. Bezazael may have led the way, but he did not fashion every piece and strand of gold, silver and copper. He could not single-handedly put the Mishkan’s roof together. Nobody could, for that matter; rather, trained professionals led the way, but everyone joined in. By doing so, the Ark and the Mishkan became a project for the entire community. The Mishkan and the Ark belonged to everyone. So, too, will the ark that we are creating here in Cincinnati belong to the entire community.

The final phase of ark construction will include painting complex details upon the hand-carved wooden ark and its intricate wooden overlays and panels. For this, local artists will convene at my work studio and local synagogues. At each location, craftspeople, artists and specialists from Ohio, Pennsylvania and Kentucky will paint sections of the ark according to the guidelines set by digital colorists, who colorized the original black-and-white photos of the ark from Poland.

The project is well underway, and HUC has been a tremendous help in facilitating the exhibition. The ark will first be exhibited at the Skirball museum here in Cincinnati, and, afterward, just like the ark in the Torah, it will move from one location to another.  The Aron will not be fixated at one point. It will move from site-to-site in Cincinnati and the greater Ohio region and will be exhibited and used in both museums and synagogues.

Included in the project, elaborate blueprints are provided by architects that detail the proper assembly and disassembly of the ark as it moves site to site.  This is just like the ark described in this week’s parsha. The ritual items of our people did not remain fixated. Rather, they moved with our people.  The Torah describes the detailed process for assembling and disassembling the Mishkan.  The process was lengthy and quite complex. The Kohatites were tasked with carrying the sanctuary vessels. The Gershonites were in charge of tapestries and roof coverings. And the Merarites were responsible for transporting wall panels and pillars. The versatility of transportability was essential for our people. We were not redeemed to live out our freedom in the desert, but, rather, we needed to continue on our journey to the Land of Israel.

Throughout this summer, I will be completing the woodworking with artists, woodworkers, architects, and structural engineers. Upon completion of the finishing touches in August, I will be returning to Adath Israel Congregation. If you are interested in becoming involved with the project throughout the summer in any way, please reach out to me, and/or make a charitable (tax-deductable) donation to The Opening the Ark project. Starting in September, I will be offering Jewish art classes, and I hope our communities can join together to paint one of the panels. I look forward to the months ahead!  Just as the Israelites joined together to build the tabernacle, I look forward to having our community join together to work on the Cincinnati ark.

About the Author
Shmuel Polin is an imminent rabbi from the Hebrew Union College-Jewish Institute of Religion (HUC-JIR). A Greater Philadelphia/New Jersey native, he completed his B.A. at American University in Washington D.C. where he studied Jewish Studies and International Studies. He also completed both an M.A. in Holocaust and Genocide Studies and an M.A. in Jewish Studies from Gratz College of Melrose Park, Pennsylvania. His thesis focused on the depiction of European antisemitism in 1930's-1940's American and foreign cinema. Shmuel has years of experience of teaching Hebrew School at Kehillat HaNahar of New Hope, Pennsylvania, leading as a student rabbi at Beth Boruk Temple (Richmond, Indiana) and Temple Israel (Paducah, Kentucky), and also working for Israeli non-governmental organizations. Currently living in Cincinnati, he is finishing up his studies at HUC-JIR, while serving as the rabbinic intern of Adath Israel.
Related Topics
Related Posts
Comments