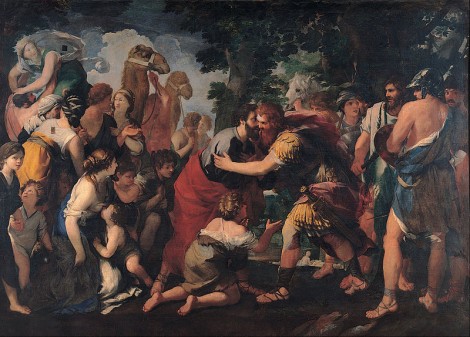 The red lentil soup (*see recipe below) is simmering on the stove. “Red, red pottage,” not unlike the lentil soup that Jacob traded for Esau’s birthright (Genesis 25: 30-34).

The meat of the poor, Arabs call lentils. But there is nothing poor about this. It will be served with dollops of Greek yogurt, coosbara (coriander), and magic black seeds that my kids call ketzach. Italian/Jewish/British chefs call the plant that these seeds come from, “Nigella.” I grew up in a city where the summer of love was shrouded in fog, and thus I call it the colloquial “love-in-a-mist.”

I don’t know if there will be any mist here in Jaffa. But I’m certainly feeling the love. The soup is for my daughter and her wonderful husband, who are flying home.

She and her husband were both born in Soroka Hospital in the Negev, during a nationwide doctors’ strike. Just before my daughter was born, the desperate doctors at Soroka decided to hunger-strike. The doctor who pulled my black-eyed, premature beauty out of my belly performed the C-section with an IV in his arm.

Neither she nor her husband seems to have been intellectually scarred by the dicey medical conditions during the months-long strike. They are both in New York, completing advanced degrees at Columbia this year.

They promise that this is their last year in America. They can’t wait to come home for good, and we no longer feel the meter running when they visit.

But like many Israelis, we wonder what awaits them when they return. Many of their peers can’t “finish the month” on their incomes. They live in constant overdraft. An average salary here is no longer enough to afford a home. Parents who can – and thank G-d we are among them – must help their adult children. That caused members of their generation to take to the streets in the summer of 2011. We joined them, schepping naches, as they demanded social justice.

Many members of their generation fear that they will not be able to make it in their beloved homeland. They may well be enticed by the job offers and relatively secure life that is available to our best and brightest abroad.

We — their parents – fear that that we will be left behind, that inability to buy health insurance at an advanced age could make it impossible for us to move.

I have heard more than one grandparent beg a member of my children’s generation, “The cemeteries of Europe are soaked with the blood of our family. Please leave before this becomes a burial ground for you and your children.” They fear that a holy war between Muslim and Jewish extremists for a hill in Jerusalem will end very, very badly for all.

On Monday, the government applauded another decrease in the unemployment rate. They boasted that during the month of November, a 0.7% dip brought the rate to 5.6%. This “good news” precedes imminent elections in March.

The timing of this announcement came on the heels of the Latet humanitarian organization’s report that “One in three children in Israel is poor.” The enviable unemployment rate appears to contradict Latet’s report. But it doesn’t. Many of these poor children have working parents.

The government says that this election is about security – not economics. But how secure will we be with many of our best and brightest children gone.

Some believe that Israel can afford to lose us and them. They suggest that large, religious families will make up the slack, or that the Messiah will come. Some readers of my first blog wrote from Boca Raton, Teaneck, and Puerto Vallarta that I should leave Israel for the United States – or better yet, Europe.

They underestimate myself and my children. We know how to make red, red pottage. The descendants of Esau remembered the taste and they taught us.

We know how to wrestle with angels and with devils. We have been called up again and again to do the latter. And we will be ready to wrestle anyone when the time comes.

We are going to the polls in March. It’s our birthright too. And we will not trade it for soup, natural gas, or whatever they are selling.

5 to 6 large carrots, peeled and chunked (about 4 cups)