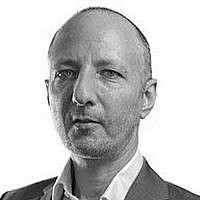 The Blogs
Jeremy Rutman
Patents for startups
Apply for a Blog
Please note that the posts on The Blogs are contributed by third parties. The opinions, facts and any media content in them are presented solely by the authors, and neither The Times of Israel nor its partners assume any responsibility for them. Please contact us in case of abuse. In case of abuse,
Report this post.
Kohelet wrote ‘There’s nothing new under the sun’,  אין כל חדש תחת השמש, which one might take as bad news for patent attorneys.  On the other hand he also wrote שלח לחמך על פני המים כי ברב הימים תמצאנו. And as long as we’re talking about food and innovation, let’s drop the philosophy and segue directly to plant-based meat substitutes.
We recently had the opportunity to chat with Eshchar Ben-Shitrit about his startup, Redefine Meat, which takes Shakespeare’s ‘what’s in a name’ to another level and brings a 3D-printed meat substitute to the table. For those not apprised of the current state of meat substitutes, this world has jumped a quantum leap or two from the days of Tivol, Not-Dogs, and Soysages. 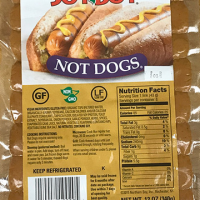 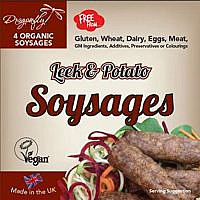 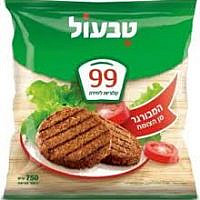 What’s in  a Flavor?

In fact, taste itself (or rather our understanding of it) has come a long way since I was a kid. First off, the primary tastes detected by the tongue no longer number four – in addition to sweet (sugar), sour (lemons), bitter (coffee), salty (chips), we now have umami, also known as savory (as in chicken broth, attributed to the taste of the amino acid L-glutamate), and depending upon whom you ask, fatty, spicy, and metallic may also be included in what was once an exclusive quartet.  Worse than this rejigging of what I thought to be a truth as inviolate as the food groups, the ‘taste map’ of the human tongue has been demoted -a belief-system catastrophe on the level of Pluto’s dismissal from the pantheon of planets. Apparently, the taste map resulted from an overly simplified copy of the results of a 1901 paper mapping the strength of response to different tastes depending on tongue location. The simplified version showed only the taste to which each region was most sensitive, and the myth of the taste map was born, with subsequent textbooks dutifully copying the error. 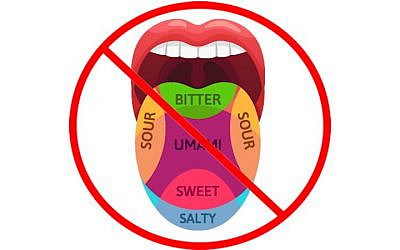 https://www.wired.com/video/watch/taste-map
So what’s in a flavor? Taste and smell are intertwined; if you block your nose and taste slices of raw potato, apple, and parsnip, you will not be able to taste the differences between them. Lest you conclude from this experiment that taste has the upper hand in our experience of flavor, consider that human tongues are covered with ~5,000 taste buds, each bud containing between 50 and 100 taste receptor cells capable of detecting one of five (or six, or seven…) tastes, while the olfactory membrane of the upper nasal passage has 10 million to 20 million receptor cells, with more than 1,000 types of odor receptor cells capable of detecting 10,000 different smells. Not that numerical superiority is necessarily indicative, but it does appear the sense of smell is more finely tuned than that of taste; just as the dark-adapted eye can apparently detect a single photon, the (human) nose can detect a single atom of sulfur. And the canine sense of smell is reputed to be 10,000 to 100,000 times more sensitive than human olfaction, so you’d do well to have some consideration the next time you buy dog food.
Beyond taste and smell, there is ‘somatosensation’, instrumental in generating the sense of texture and also responsible for sensations relating to temperature, irritation and pain. And numerous studies have indicated that appearance can affect the way in which flavor is perceived. A classic experiment here involves giving a wine expert white wine colored red with a flavorless colorant -upon which you’ll generally get a description as chock full of irritating red wine adjectives, as the wine expert generally is of himself.
In any case the take home here is that flavor is actually a combination of smell, taste, texture, appearance, and temperature, a fact not lost on the aforementioned Ben-Shitrit and his startup Redefine Meat. Their approach is to tackle the issue of texture with the 20th century’s premier solution-looking-for-a-problem, the 3D printer. 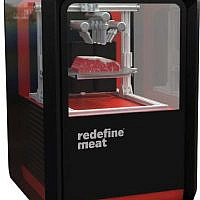 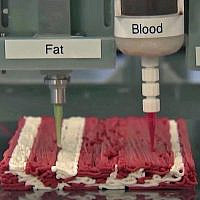 Redefine has 4 patents pending and one granted. The granted patent(WO2020152689 -Meat Analogues And Methods Of Producing The Same) was given an accelerated examination under the ‘green patent’ route, one of several ways to accelerate the patent process. (The energy required to produce a calorie from meat products is estimated to be at least 10X that for animal products, hence alternatives to meat are generally considered green). The patent protects a method for production of an inhomogenous, anisotropic meat substitute as shown in the ‘pixel meat map’ shown earlier.
In the patent they describe several quantitative tests they run on their samples. The texturometer, for instance, compresses a sample twice and measures the resistance of the sample to this force over time. The degree of hardness, brittleness, chewiness, gumminess, cohesiveness and adhesiveness of the sample, (as rated by human beings) can be correlated to the measurements from the texturometer, which also apparently can measure Young’s modulus, cohesiveness, hardness, and chewiness.

The printer is capable of laying down individual strands of fat, blood, and muscle substitute in particular directions, as you can see in the rightmost figure above. These extrusions form ‘loaves’ such as those below that approximate slices of steak, without the annoying bone and of an unlimited length. As you can see below this gives the approximate appearance of a cut of steak: 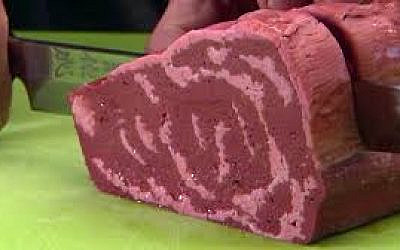 Redefine concentrates on providing the inhomogenous texture by 3D printing muscle, fat, and blood components through nozzles, layer by layer. 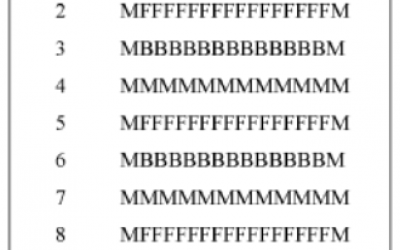 The figure above is a ‘pixel map’, showing a cross section of a Redefine Meat slab of steak, which in a sense has transformed food into text in a twist of lingua-gustatory legerdemain.  In any case the letters stand for:
M: Muscle or protein component, comprising wheat, pea, potato and other sources of protein.
F: Fat, a solidified vegetable shortening derived from palm oil.
B: Blood component, made of starch and beet coloring.
Variant ingredients include other proteins (such as coconut and other plant sources, insects, algae, fungus, bacteria), other fats (variou splant butters and oils, and other lipophilic materials), albumen, and natural flavors.The protein fibers can be aligned by various methods such as extrusion and shearing.
The end result is low in fat, low in cholesterol, and low in sodium. Ben-Shitrit says including vitamin B12 (deficient in many vegetarian/vegan diets) as an additive is possible but not being done at the moment as the main audience is meat eaters and not vegans -who dont like it anyway as ‘its too meaty’.
The main differentiator for Redefine Meat is the the texture; they have separated the confounding issues of texture, flavor, and flavor-delivery, and feel that with a superior texture and better flavor delivery, they can provide an overall flavor experience that competes favorably with real meat.
The 3d printer is in a sense the perfect way to provide the texture needed for steaks – the directionality of fibers running lengthwise down the steak extrusion axis, are a key contributor to texture, and there is no other way currently available to produce such fibers within homogeneous structure to mimic the fibrous nature of real meat.

The Proof of the Pudding

So how does the Redefine Meat burger stack up? “We don’t do burgers !!” avers Ben-Shitrit -they are shooting for the ultimate prize of the meat world, steak. A recent taste test was a swimming success. This was not an A-B test but rather what you might call an under-the-nose test. Ministeaks, ‘raysim’ and several other dishes were served to a select congregation that happened to be within smelling distance of a food truck (another recent introduction to Israel’s food scene) near the startup’s Rehovot offices. Most if not all customers were surprised to learn that they had eaten a meat substitute, recalling the white-wine-as-red-wine test mentioned above. The food also wasn’t given away but rather sold, to prevent ‘freebie seekers’, and as mentioned the food was not positioned as a meat substitute. While people ate, Ben-Shitrit informally interviewed his diners for feedback to improve the next iteration. A public side-by-side test is apparently yet to be done but conceivably is coming up.
One particular advantage that a plant-based meat substitute has in Israel is that it allows once-impossible kosher dishes, such as the multiply-forbidden double bacon-cheeseburger, an unattainable fantasy of my Texas youth -two all-beef patties layered with crinkle-cut pickle chips, tomatoes and lettuce, topped with strips of sizzling bacon and dripping with slabs of melting cheddar – delicious, unattainable dream of a kosher childhood, as tempting and untouchable as the shikse cheerleaders of public high school. This can now be a reality, and in its vegan form, far less likely to induce a heart attack. 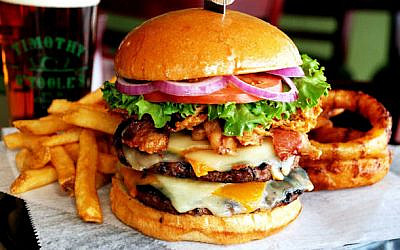 The Redefine Meat product has kosher and allergen approvals. To make sure you’ve got the real deal, check if its kosher parve.

Current leaders in the meat substitute space are Beyond Meat and Impossible Foods, who both provide a ground meat substitute, but don’t attempt the 3D printing that Redefine is developing. Impossible Foods, for instance, attempts to recreate ‘true blood’ by splicing heme genes (heme being a cousin of hemoglobin, the molecule that makes blood red) into yeast, which subsequently produce proteins tasting of blood. At least one other printing-based meat-substitute startup does exist, Barcelona-based startup Novameat which also enjoys the texture advantage that Redefine utilizes and also comes in the form of a steak, as opposed to ground meat . They claim that “We are trying to nail the four parameters that enable to imitate meat, that is taste, texture, appearance and nutritional properties. Right now, taste has been mastered with plant-based hamburgers and texture with soy extrusion, but no one has achieved the two together.”
With environmental awareness growing and the global population rising, the meat alternative space is looking ever tastier to potential investors. Redefine Meat is looking forward to a big launch in the next few months, so if you see a foodtruck near Rehovot offering steaks, don’t be fooled but don’t pass up the chance.
About the Author
Dr. Jeremy Rutman, the founder of RutmanIP grew up in Texas and got a B.Sc degree (cum laude) in physics from Harvard University. and a M.Sc and Ph.D. in physics from the Technion. He has 15+ years of experience in drafting patent applications in various fields such as physics, computer hardware and software, electrical engineering, mechanical engineering, green energy, software, and other areas. He has extensive experience in turning startup ideas into strategic assets, and he has published in leading professional journals in the field. Hobbies include deep learning (AI), 3D printing, and playing the violin.
Related Topics
Related Posts
Comments