This morning I landed at Ben-Gurion airport on a direct flight from New York. That’s not so interesting, except for the fact that I did the exact same thing 15 years ago today. Coincidence or intentional? I could have stuck around one more day and told my mother “happy birthday” in person. On the other hand, my trip had already been pretty long and I had to get back; plus, the idea of recreating my aliyah 15 years later to the day was pretty tempting. As the day got closer, it became apparent that I wouldn’t be inviting the same friends to meet me at the airport, eating lunch at the same restaurant on Rothschild (it closed), or going to the same beach that I went to in 2006. Instead, I’d be taking my PCR test and heading straight home to quarantine for the rest of the day.

Not that I had second thoughts, but I knew I’d chosen the right departure date when the latest restrictions were announced: had I flown just one day later, I’d have to quarantine for a week. I promise to call my mother.

My pre-flight layover in Newark was stressful, thanks to my Saturday morning COVID test results not arriving in time. After fifteen years of dealing with a lot worse, I told myself it would be ok before eventually sucking it up and paying two hundred fifty (CENSORED)-ing dollars on a rapid test at the airport. I prepared myself for the worst: to get Saturday’s results THE MOMENT I swiped my credit card. Fortunately, it didn’t happen. Once again, “yiyeh b’seder” turned out to be true. I made my flight and even got upgraded (I deserved it!).

Sure, it would have been fun, unlikely as it was, if Nefesh B’Nefesh would have liked my idea to send a camera crew to the airport and “make a thing” out of it (Some Dumb Oleh reliving his arrival after 15 years). If not for, you know, that whole COVID thing. And it would have been perfect had I succeeded in finding a mailing label for my forehead. But whatever, who cares… One of my goals in recent years has been to appreciate the ideas/things I have done, rather than beat myself up over all the ones I haven’t. The day’s been good enough and that is good enough. 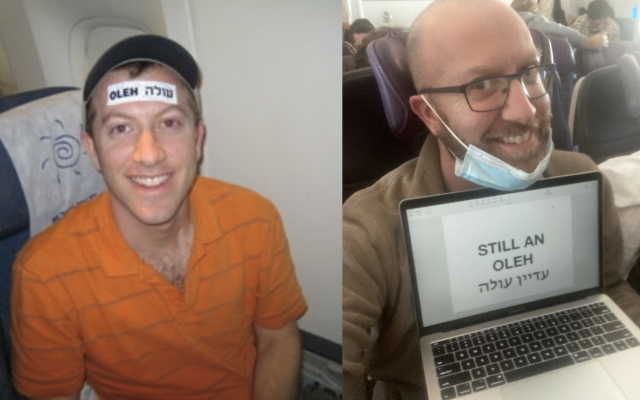 As I write this, I’m thinking about my fellow 15-ers (give or take), those who I met early on. Remember the NBN Blogger Conference?! (Wasn’t life simpler and more fun in some ways before Facebook? I miss my old blog, What War Zone?) I felt a little compelled to make my forty billionth “yiyeh b’seder” joke below, but it’s been FIFTEEN YEARS! I’m not the same person anymore and neither are you. I often wonder if there’s some new immigrant who still has his hair who’s discovering all the same things we once did. He’s probably complaining too much and relying too much on superficial stereotypes, and if I don’t know him, it’s probably because he’s on Tik-Tok. Dumb whipper-snappers. (How can I yell at someone to “get off my lawn” when I don’t have one?)

I don’t remember what I thought this journey would be like, probably because the long-term future didn’t even cross my mind. I could make some analogy between today and my aliyah (“don’t let perfect be the enemy of good”, “yiyeh b’seder”, etc.) but that would feel a bit inauthentic or contrived. I’ve been here too long to hyper-focus on and talk about “aliyah” in the way that I did 10 years ago (and I’ve talked about it A LOT). That’s probably all of us, right? At some point, it just becomes…..life. All these conclusions feel more like life lessons to me. But I can’t imagine learning them the same way anywhere else.

Anyway, aliyah is easy, right? Klitah (absorption) is the hard part. Aside from this post, today is just another day, spent in quarantine (a fancy word for “on my couch”).

I brought back two suitcases with approximately 45,000 Amazon deliveries for me and some friends, and as I set up my new apartment for me and my dog, my appreciation for Target is greater than ever before.

I know that my time in America is more vacation than real life but, holy cow, it’s hard not to feel how easy those conveniences make life feel. (And I’m intentionally leaving that ridiculous sentence structure intact. I’ll blame my lack of sleep from the flight but I can’t be the only one who’s forgetting my English, right? In a recent text, I told a friend that I was “considering stopping listening to a podcast.” I don’t know how to say it but there is no possible way that “considering stopping listening” is correct grammar.)

And even though I’ll always stand out in Israel as American, it’s funny how as the years pass, a lot of stuff just becomes normal and routine, for better or worse. I guess I’m more used to my life being challenging, things being less convenient, and my sounding like a dipshit when conversing with the locals because, somehow, my spoken Hebrew is also getting worse over time, not better…

Even though I could do without some of the annoyances and inconveniences that await (my new neighbors reading this know what I’m talking about), I tell myself that these aren’t the things that determine one’s level of happiness in life (and if that’s not true, don’t tell me. Then buy me a dryer).

Anyway, any oleh vatik (“veteran/experienced immigrant”?) could reflect on this stuff forever but life is short and we don’t have the same patience to talk at length as we used to. But ain’t that just how life goes? I’ll probably keep posting a captioned picture until my 20th, unless Iran drops a bomb on us. (If you’re abroad and just cringed….on behalf of all of us: don’t be so sensitive.)

Here’s to 15 years in Israel. Who wants to hire a comedian?