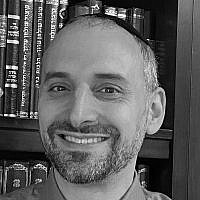 The Blogs
Maury Grebenau
Apply for a Blog
Please note that the posts on The Blogs are contributed by third parties. The opinions, facts and any media content in them are presented solely by the authors, and neither The Times of Israel nor its partners assume any responsibility for them. Please contact us in case of abuse. In case of abuse,
Report this post.

My father passed away on Friday March 13th, 2020. That evening the shul in our community in Dallas shut down and all minyanim essentially ceased. After the burial in New Jersey, I began my Shiva on that Monday right as self-quarantine and shelter in place became the new normal in Jewish communities across the US. The word I use most to describe my shiva is “bizarre.” Like many other areas of life, the familiar was replaced by something new, awkward and strange. This was especially trying for shiva since shiva in the best of situations is usually difficult and can be awkward for both the person sitting shiva as well as those who are offering comfort.

The rabbi told us that the purpose of shiva was to cement a sort of memory book about my father and that idea resonated with me. Contemplating trying to do this without all of the usual structures of shiva was daunting. Support looked different but was certainly still present. One of my closest childhood friends came to the funeral site but ended up texting me that he felt too nervous to enter the building. Instead he watched the funeral on his phone from his car in the parking lot and waited to express his condolences when we exited the building to drive to the graveyard. I was deeply touched by this gesture which would never have happened in a normal circumstance.

The goal of Shiva is Nichum. Nichum comes from the root N.Ch.M. which means a reframe, a new appreciation. An example is Shemos 32:14 where Hashem takes a new perspective on the potential of destroying the Jewish people in the aftermath of the golden calf (a similar example is seen after the flood). It is a perspective on the loved one who has passed away that can only be reached when the life can be viewed in its totality. Accomplishing the goal of Nichum requires dep thought and deep feeling. When the usual structure of shiva is not present, it needs a real plan of how to begin the journey to a sense of Nichum.

I found that sitting Shiva during a time of shelter-in-place and social distancing means that I needed to be more thoughtful about creating my own journey through the shiva process. I am sharing some of the aspects that were most meaningful for me. My hope is that these thoughts and perspectives may help others who unfortunately have to go through shiva during this difficult time or clergy and others who help shepherd people through this process.

Capturing the experience – I found that capturing both my reflections and also some of the events and visits was helpful.

The positive side of video/phone calls

My hope is that these reflections can be helpful to those sitting shiva (or guiding others through that process) in these unusual times. May we see an end to this plague quickly, may Hashem heal all those who have taken ill and may we collectively know no more sorrow.

About the Author
Rabbi Maury Grebenau has been leading Jewish schools for the past decade and is currently the principal of Yavneh Academy of Dallas. Rabbi Grebenau has written a number of articles on educational leadership and current issues including teen health and school technology use. His articles have been published in Phi Delta Kappan, Principal Leadership and Hayidion, among others. He is currently a doctoral candidate at Northeastern University.
Related Topics
Related Posts
Comments