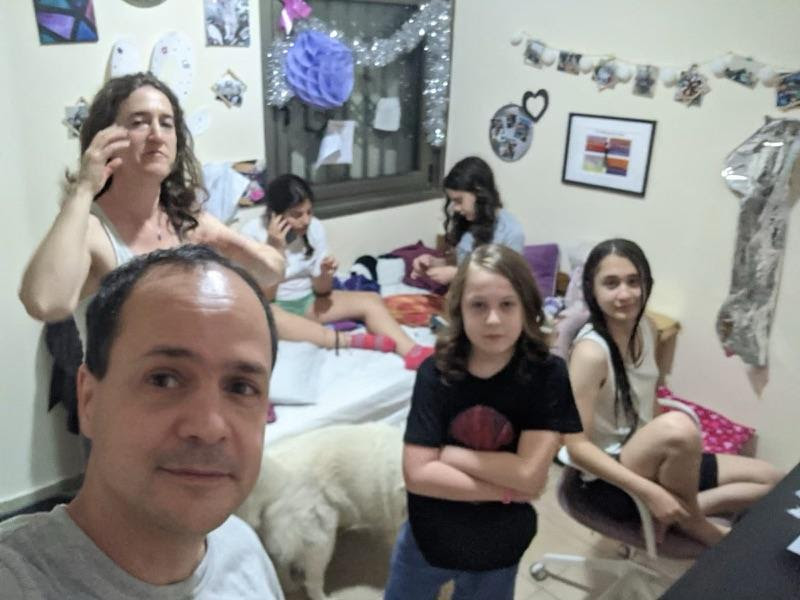 Image courtesy of Rabbi David Lerner
Here is a picture of my first cousin Nili and her family in their bomb shelter — which they have had to visit throughout these nights. In response, Israel has attacked the locations in Gaza where the rockets are launched or where commanders and leaders of Hamas are based; because of where those neighborhoods are in Gaza, inevitably civilians are caught up in this conflict.
A new and potentially more frightening phenomenon has added fuel to the fire as Israel Arabs or Israeli Palestinians (those who are living in Israel as citizens of Arab/Palestinian descent — 20% of the Israeli population) have started to clash with Israeli Jews opening a new and terrible aspect of this situation. Fighting and mob violence have broken out in the streets of several Israeli cities and towns, even ones where Jews and Arabs have coexisted in peace.
The political dynamic has made this situation more complicated as there is only a caretaker government in place. Bibi Netanyahu has been unable to form a government after the fourth election in short succession and seems to have been caught off guard by the rapid escalation from Gaza. However, it is in his best interest to have events draw away attention from the political gridlock, keeping him in power longer which also shields him from prosecution on several counts of corruption.
As usual, this complicated situation is reported on in a variety of ways, often not helpful to Israel. The cover of the Boston Globe today has a picture of the destruction in Gaza, nothing about the destruction in Israel. Today’s New York Times is more balanced in its photographs with one that displays victims and devastation from each side of the conflict. On social media, often the tension boils over into not only anti-Israel and anti-Zionist themes, but also into antisemitism with memes that advocate for violence against all Jews. “Eradicate the Jews” is a popular one. Most people simply throw up their hands and see all this as an endless “cycle of violence.” While that does seem to be the end result, learning the details and the nuances can help us not only understand the causes, but also help us see, God willing, ways out of this situation. Bear in mind, that there is also hate that right-wing Jews frequently post
Finally, let’s make it clear that the winners are extremists on both sides of the conflict. The losers are the moderates, the peacemakers, and the children.
Let’s hope this conflict de-escalates quickly; that Israelis don’t have to sleep in their bomb shelters, that Hamas ends their attacks and that innocent Gazans do not have to lose their lives and homes due to this violence.
Let’s hope that new leaders emerge who chart a different course; one that breaks the cycle of violence and paves a new road towards peace.
For us, let us stand with our families and friends in Israel. Let us understand the nuances and complexities of this moment as we work together to stand with Israel, moving her closer to the vision that Isaiah prophesied almost 3 millennia ago that swords can yet become plowshares, and nations shall not know war anymore.
Oseh Shalom Bimromav — may the One who makes peace on high, help us make peace, despite the complexities down below.
B’Shalom,
Rabbi David Lerner
Links to articles:
About the Author
For the past seventeen years, David Lerner has served as the spiritual leader of Temple Emunah in historic Lexington, MA, where he is now the senior rabbi. He has served as the president of the Massachusetts Board of Rabbis and the Lexington Interfaith Clergy Association. He is one of the founders of Community Hevra Kadisha of Greater Boston, ClergyAgainstBullets.org and Emunat HaLev: The Meditation and Mindfulness Institute of Temple Emunah. A graduate of Columbia College and ordained by the Jewish Theological Seminary where he was a Wexner Graduate Fellow, Rabbi Lerner brings to his community a unique blend of warmth, outreach, energetic teaching, intellectual rigor and caring for all ages.
Related Topics
Related Posts
Comments