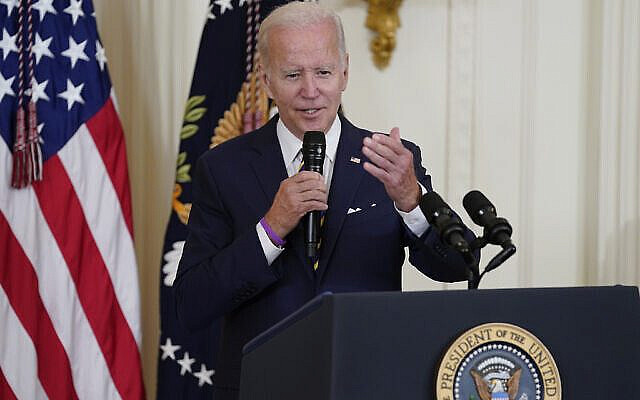 FILE - President Joe Biden speaks during an event in the East Room of the White House, Aug. 10, 2022, in Washington. Biden will host a White House summit next month aimed at combatting a spate of hate-fueled violence in the U.S., as he works to deliver on his campaign pledge to "heal the soul of the nation." (AP Photo/Evan Vucci, File)

The Jewish New Year provides an opportunity for renewal. It is a time when we take stock of ourselves, check our moral compasses, and reflect on ways we could do better in the coming year.

Over the past year, the challenges we’ve faced in the fight against antisemitism and hate have been among the greatest since I began as CEO of ADL. Nearly a year ago, I stood up at our virtual Never is Now conference and warned that while attacks of the far-right are like a hurricane, immediate and deadly, the antisemitism taking shape on the left is more akin to climate change: slowly, but surely, the temperature is increasing. I’m sorry to have to say, but in the time since, the heat has turned up even more.

For example, just recently, an anti-Zionist group called BDS Boston promoted an initiative from an anonymous organization called “The Mapping Project.” It was a site that called for people to “dismantle and disrupt” the interconnected nodes of “Zionism, Policing and Empire” around the state of Massachusetts.

Their targets: a Jewish high school, an arts collaborative, a coordinating body of synagogues, Harvard Medical School, and the Combined Jewish Philanthropies. Every one of those organizations, and many more, are put at serious risk.

As you know, this anti-Zionist movement has no bigger foothold than on college campuses. At my own alma mater, Tufts University, the Students for Justice for Palestine group is calling for a boycott of all Jewish organizations and courses, ostracizing Jewish students on campus. And earlier this month, University of Wisconsin students returned to classes to find chalk graffiti calling for the ejection of “Zionists” from campus. I could spend all day listing all the incidents on campuses worldwide that have left Jewish students feeling overlooked, ostracized, and expendable to these universities.

Whatever their politics, the antisemites are talking to each other across the globe.

Consider the “Great Replacement Theory” — the virulently racist and antisemitic conspiracy theory that holds a secret group of Jews are plotting to flood the West with non-whites and immigrants in order to commit “white genocide.”

It is this thinking that led neo-Nazis to terrorize the town of Charlottesville with cries of “Jews will not replace us!” and ultimately kill a young counter-protestor in 2017.

A white supremacist invoked Replacement Theory when he massacred 11 Jews in a synagogue in Pittsburgh in 2018; another killed 51 Muslim worshippers at two mosques in New Zealand in 2019; and yet another gunned down 22 Latinos at a Walmart in El Paso that same year. This summer, the same conspiracy theory was the driving force in the murder of 10 Black people at a supermarket in Buffalo.

As we’ve said time and time again at ADL, while hatred may start with Jews, it doesn’t end with Jews. Such vile bigotry affects marginalized communities across the globe.

In recent weeks, I’ve traveled from Australia to meet with other diaspora Jewish communities, to Basel, Switzerland, for the 125th anniversary of Theodore Herzl’s landmark Zionism conference. No matter where I am, I speak with Jews who are worried about these challenges we all face.

They share concerns that too often, friends of theirs — allies to our communities — and even fellow Jews say, “Ah, it’s not so bad.” Or they stay quiet because they don’t want to stick out or ruin relationships.

Indeed, many people on the left have not taken antisemitism seriously, they have allowed the bad arguments about Israel to blind them from the reality that anti-Zionism is not a philosophy or idea that is based on equality or justice, it’s based on negating the inherent rights of the Jewish people that they would accord to everyone else.

And conversely, those on the right too often turn a blind eye to leaders who routinely express extremist views – people who traffic in antisemitic tropes about Jews being good with money or running the world, or who use Holocaust imagery to make political points and even routinely court known antisemites and extremists.

One need look no further than the recent remarks by the President of Iran on 60 Minutes who, when asked whether he believed the Holocaust had happened, responded there “are some signs that it happened,” and added “if so, they should allow it to be investigated and researched.” This distortion adds to a long line of state-sponsored, antisemitic Holocaust denial from the Iranian regime. While there are many examples of the challenges we still face, there is good news too.

One of the biggest positive developments in the fight against extremism and hate occurred two weeks ago, when the Biden Administration heeded the call of ADL and other civil rights groups, and hosted a landmark White House summit devoted to pushing back against these darker forces in society. I was honored to participate in this event and engage in meaningful conversations with many of our partners in government and civil society about how we can ramp up the fight against hatred in America. The effect this event had in shining a light on these issues and motivating leaders from across society to take action was an incredibly positive development in our fight against hate.

To keep up the momentum generated by this event, we renewed the Mayors’ Compact Against Hate with more than 150 mayors committing to promote fundamental principles of justice and equality by rejecting racism, extremism and bigotry in all forms. And with the National Urban League, we launched a new community solidarity and safety coalition, which creates an alliance of non-governmental organizations to collectively address critical safety issues, and particularly hate fueled-violence.

As we begin 5783 next week, I am energized and inspired by these initiatives, which are not only working hard to solve the sources of threats against Jewish people, but also can help to dramatically improve society for all people. But there is more we must do, and I look forward to having you join us as we work together to fight hate for good. May the coming year be one of that is filled with happiness and health for us all. L’shana tova u’metuka.

About the Author
Jonathan A. Greenblatt is CEO and National Director of the Anti-Defamation League.
Related Topics
Related Posts