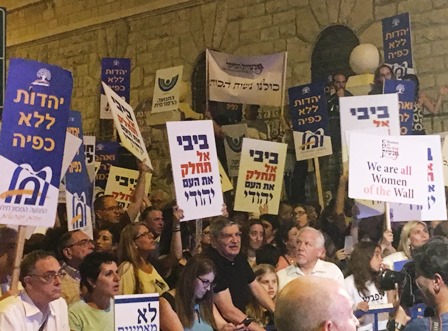 Rabbi David Stav is not a Reform Jew. How dare anyone accuse him of that!

Several days ago, a tape was leaked to Israeli television in which Aryeh Deri, head of the ultra-Orthodox Shas party, launches a scathing attack against Modern Orthodoxy as a whole and the Tzohar rabbis in particular, accusing them of being “borderline Reform.”

By chance, on the very day the tape surfaced, I had the privilege and pleasure of meeting with Rabbi Stav, founder and director of Tzohar, which prides itself on “nurturing moderate, rabbinic leadership” and “leading the revolution for an ethical, inclusive & inspiring Jewish Israel.” How gratifying it was to be able to discuss issues of religion and state openly and candidly with this erudite and genuinely empathetic courageous religious pioneer. I won’t go into the details of our conversation (though I don’t think he’d be bothered by anything I might divulge), but one thing I will disclose: Reform he is not.

Whoa! Stop! Whether or not Rabbi Stav is Reform is not the point. What is, is that the ultra-Orthodox have appropriated “Reform” as an epithet to be hurled at those who, in Deri’s words, “are turning in liberal directions” and who constitute a “looming threat” to Jewish continuity. Reform is not a four-letter word and it is regrettable that our Minister of the Interior (the portfolio Deri holds), equally responsible to the entirety of Israel’s residents, would say things that might turn it into one.

Still, I’d probably not have gotten around to writing this piece had Deri’s remarks not been echoed – almost drowned out – by those of Shlomo Amar, Chief Rabbi of Jerusalem and past Sephardic Chief Rabbi, who proclaimed a few days later that “Reform Jews are worse than holocaust deniers.” You can catch his remarks, word for word, on the ultra-Orthodox Haredi website Kikar Shabbat as he responds to the latest appeal of progressive Jewish groups to the Supreme Court regarding the Kotel (Western Wall). “They don’t have Yom Kippur or Shabbat but they want to pray [at the Western Wall]. But no one should think that they want to pray, they want to desecrate the holy,” was Amar’s take on the matter. “Today there was a hearing on the Kotel on the petition of the cursed evil people who do every iniquity in the world against the Torah,” he added, including both Conservative Masorti Jews as well as the Women of the Wall (original and otherwise) as objects of his wrath as all were party to this litigation.

Are these the true spokesmen of that moderate and tolerant Sephardic Jewish tradition we hear so much about? Another gutsy and spirited Jewish leader of our time with whom I was also honored to meet with a few days ago insisted they are not. Rabbi Haim Amsalem, a founder of Shas who served as one of its Knesset members for several years, eventually parted ways with the party over myriad disagreements regarding interpretation of Jewish law and went on to become a co-founder of “Giur k’Halacha.” This network of independent Orthodox rabbinical courts conducts conversions in a welcoming and open-hearted manner as “the necessary response by mainstream Orthodox leaders in Israel to the intractable and untenable refusal of the state-mandated religious establishment to accommodate the needs of thousands of citizens… simultaneously alienating them from their national and Jewish identity.”

Now all of our leaders – across the spectrum of religious orientation, political affiliation and ethnic association – need speak out loudly and clearly against these vitriolic attacks. To his credit, Prime Minister Netanyahu already has, immediately declaring that “I categorically reject any attempt to delegitimize any part of the Jewish people.” We can only hope that these words will lead both to the implementation of the Western Wall agreement and the shelving of the Conversion Bill – two matters that, unresolved, deny the legitimacy of the diversity of Judaism by the Jewish state.

In the meantime, it is terribly disconcerting that there have been so very few public responses to the venomous proclamations of the Minister of the Interior and the Chief Rabbi of Jerusalem. The silence is deafening, and can’t be excused by suggesting that their pronouncements are not worthy of comment. Unless they are excoriated, it will gradually take hold that Reform is indeed a four-letter word.

It isn’t. Neither are “Conservative,” “Masorti” or “Women of the Wall.” On the other hand, while it pains me to point it out… – well, count for yourself: S-h-a-s and A-m-a-r.

About the Author
Dr. David Breakstone is a long-standing member of the executive of the World Zionist Organization and the conceptual architect and founding director of the Herzl Museum and Educational Center in Jerusalem. The opinions expressed herein are entirely his own.
Related Topics
Related Posts
Comments