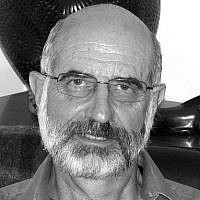 The Blogs
Barry Leonard Werner
Apply for a Blog
Advertisement
Please note that the posts on The Blogs are contributed by third parties. The opinions, facts and any media content in them are presented solely by the authors, and neither The Times of Israel nor its partners assume any responsibility for them. Please contact us in case of abuse. In case of abuse,
Report this post.

Idealists defend their values. If we are going to speak to “progressives” about the BDS movement we should frame our arguments in terms of progressive values.

The BDS movement supports Muslim extremists like Hamas who claim that Jews living in land that had once been conquered by the followers of Mohammed, especially the Middle East must live like dhimmis, second class citizens, who publicly acknowledge their inferiority to Muslims and therefore they may not enjoy autonomy. Muslim extremists proudly and publicly reiterate this claim to justify terrorism around the world, including the brutal torture, murder and sexual slavery of non-Muslims, not just Jews, and they use it to recruit new jihadists from among non-politicized religious Muslims. Progressives should not support such extreme religious fanaticism.

The BDS movement supports Arab racists like the PLO who claim that only Arabs, but not Turks, Persians, Kurds, Europeans, etc, and certainly not Jews have the right to autonomy in the Middle East. Progressives should not support racism.

The BDS movement supports colonialism. The various wars to destroy Israel were attempts on the part of Arab nations to grab the land of the legally constituted sovereign State of Israel. Progressives should not support colonialism.

The BDS movement supports Arab rejectionists who want to separate Jewish Israelis from all the Arabs of the Middle East, even from Arab Israelis. Progressives should be trying to unite, not divide people.

Progressives should support the Western oriented leaders of Jordan, Egypt, Saudi Arabia, other members of the GCC, and Morocco who want to bring modernity to their countries. These leaders want to end the senseless war against the Jews and integrate Israel into the region. Support for the BDS movement means support for the reactionary extremists who want to keep the Middle East in the Middle Ages.

The responsible for the nakba rests with the UN for not including controlled population exchange in its 1947 Partition Plan for Palestine as it did in its partition plan for India that same year and as proposed in previous partition plans that the Arabs rejected. (If the UNSCOP committee had included population exchange the Arab and Muslim world would surely have blocked the whole plan.) The UN member states knew that the Arab world intended to devour the nascent Jewish state as soon as the British army was withdrawn. So, it was the UN that was responsible for the inevitable, violent self-imposed population exchange that ensued.

The Arabs publicly boasted of their intention to perpetrate a bloody nakba on the Jews. The fact that the Israeli army was able to block it in most of Palestine does not mean that the Arabs were not guilty of planning it. The world forgets the brutal and murderous displacement of Jews the Arabs perpetrated in Jerusalem, Hebron, the Etzion bloc, etc.

The Jewish state exercised admirable restraint by allowing a very large number of Arabs who did not pose a military threat to remain in Israel. The Arabs showed no such restraint.

The violent ejection of the Jews of the rest of the Arab world from their homes immediately after Israel was established and their resettlement in Israel constituted another self-imposed population exchange.

The accusation that Israel is expansionist is false

Israel is accused of expansionism because in the process of defending itself against invasion it reversed the tide of war and occupied territory of the invading Arab countries. Israel refused to return conquered territory until the Arabs agreed to accept full peace treaties. Israel justifiably insisted that returning conquered land must bring peace, not simply be a temporary suspension of war that restores strategic advantage to the attackers.

The Arab countries claimed immunity when they initiated terrorist acts or wars against Israel and the status of victim when Israel fought back and won. The self defense measures the Zionists and Israel took over the years in response to Arab attacks were in general not excessive by international standards or in comparison to the brutality of the Arab attacks on the Jews, and certainly not by the standards of inter-Arab warfare.

With regard to the West bank today, Israelis believe the PA’s terms for a Palestinian state is more likely to lead to war than to peace. There are many good reasons for that assessment not the least of which is the political strength of Hamas and the precedent of attacks after the Israeli pullout from Gaza. If progressives want to promote peace and want the Palestinians to have a state, they should encourage the Palestinians to reassure the Jews that a Palestinian state would lead to a real peace and not be a threat.

The history of Israel is benign

The population of Palestine in the early 19’Th Century was very small by all estimations. Most of the Arabs who now claim that the Jews usurped their homeland were themselves descended from immigrants who migrated to Palestine in the 19’Th and 20’Th Centuries to benefit from the rising economic conditions that European immigration, especially Jewish immigration, brought.

The Zionists migrated to their ancestral homeland, they didn’t mount a military invasion or otherwise force their way in, it was not colonialism. The migration was legal by international law and the rights of the local Arabs were protected by the Ottoman Empire before WWI and by the British Mandatory Authority after WWI. The Jews had a justified need to escape the rising antisemitism in Europe that culminated in the Holocaust. They were refugees.

The proper response of the Arabs in the early days of Zionism should have been to have sympathy for the plight of the Jews of Europe and to welcome their potential contribution to the region. Indeed there were some influential Arabs who said just that. But Muslim religious revivalists and Arab nationalists won over the Arab people and the moderate leadership lost political control. At first, the Zionists sincerely tried to integrate into the Arab world. It was only after the Arabs’ violent opposition to Zionism in the 1920’s that the Jews turned to self-defense.

In the 1930’s and 1940’s Nazis supported the Arabs’ violent antisemitism. After Israel aligned with the democracies of the West the Soviet Union played its cynical Cold War regional politics and the far-left continues the old Soviet Union’s campaign of vilifying Zionism and Israel.

Progressives should not want to be on the wrong side of this history.

The BDS movement is contrary to progressive values.

About the Author
While pursuing a career in the US as a medical physicist, Barry was involved in understanding and advocating for Israel. He organized a year long academic conference called the Mid East Forum at the University of Minnesota where he was a professor. Made aliyah in 2009.
Related Topics
Related Posts
Comments