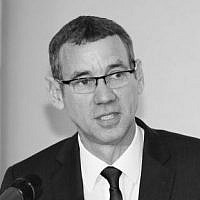 Engaging with university students is an important aspect of any ambassador’s job, especially when their country is the subject of keen interest and academic enquiry. Such is the case in the UK when it comes to Israel. Over the past year, I have been invited to some twenty universities to discuss the Jewish state, the Palestinians, the Middle East, and Israel’s desire for peace.

A visit to SOAS, an institution that specialises in my region, ought to have been routine. Regrettably, there was nothing routine about last Thursday: for over a decade, no Israeli government voice had been heard at SOAS.

This absence of an official Israeli perspective conforms to a troubling trend. In recent years, there has been a tendency within some academic circles at SOAS to rewrite history and portray Israel as a colonial imposition on the region’s indigenous peoples.

This groupthink tends to ignore the central role played by the West in the formation of several nations in the Middle East following the break-up of the Ottoman Empire – from Syria, to Lebanon, to Iraq, to Jordan – while falsely portraying the Jews as infiltrators and the Jewish state as imperialist.

These same voices speak of Israel as a serial aggressor, dismissing the history of Palestinian rejectionism and casting murderous attacks against innocent civilians as some form of heroic resistance.

On numerous occasions, speakers notorious for their vociferous hatred of the Jewish people and the Jewish state have been welcomed onto SOAS’ campus; individuals who have uttered the ugliest of anti-Semitic slurs, sympathised with terrorists, and stood up for tyrannical regimes.

Those who have expressed support for the Middle East’s only true liberal democracy have not. They have instead been ostracised.

One cannot do justice to the study of the Middle East while wilfully dismissing one of the region’s vital geopolitical, military and economic actors.

That is why I saw importance in accepting an invitation from SOAS’ Jewish Society to speak with students.

A century ago, in February 1917, the School of Oriental and African Studies was officially opened with the purpose of expanding knowledge of the languages, histories, religions and cultures of the peoples of Asia, Africa and the Middle East.

Nine months later, the government of the day issued the Balfour Declaration, formalising British support for the establishment of a ‘national home for the Jewish people’ in the Land of Israel.

Both the opening of SOAS and the issuance of the Balfour Declaration demonstrate the keen interest in, and passion for, the Middle East that existed in the UK a century ago: an interest that remains today, as I witnessed first-hand during my visit.

Serious study of the Middle East requires that SOAS students continue to be given the opportunity to hear Israel’s case.