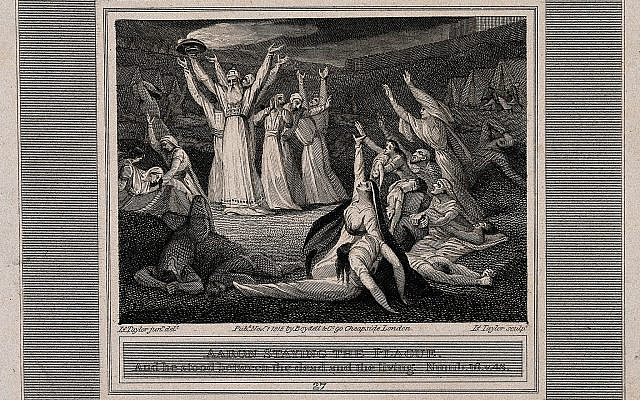 This file comes from Wellcome Images, a website operated by Wellcome Trust, a global charitable foundation based in the United Kingdom. This file is licensed under the Creative Commons Attribution 4.0 International license.

The ceremony to induct Aaron and his sons into the priesthood worried the expositors of the Midrash. It was Aaron who had made the Golden Calf, the worst of all the offences committed by the Israelites in the wilderness. Even though he was Moses’s brother, and stood alongside him in the confrontation with Pharaoh, to give him the high priesthood after such an event seemed wholly inappropriate. It looked, heaven forfend, like nepotism: Moses giving the most important job, after his own, to his brother.

The rabbis of the Midrash knew they had to try to make sense of this, they had to prove that Aaron became High Priest through his own merits, not because of any favouritism on the part of Moses.

They weren’t helped in their effort by Deuteronomy 9,2 which says that God was so angry with Aaron for making the Golden Calf that he wanted to wipe him out, and that it was only Moses’s prayers that stopped him from doing so. On the other hand they were fortified in their efforts to justify Aaron’s appointment by Leviticus 8,2 in which God instructed Moses to induct Aaron into the priesthood. There must have been a reason, over and above Moses’s prayers, for the divine favour shown to Aaron.

Using their creative powers of interpretation, the rabbinic expositors dug deeply into the Golden Calf story and came up with three different possible reasons for exculpating Aaron. One was, quite simply, that he was afraid. The people threatened to kill him if he didn’t accede to their demands. Another reason was that he thought that by taking charge of the Calf’s construction he could slow things down; he knew that Moses would soon descend from Mount Sinai bearing the Ten Commandments, at which point the people would recognise their error and the danger would pass. The third and most compelling reason was that Aaron reasoned that it would be better for him to take the blame than for it to fall upon the whole nation. This reason cast Aaron in the role of saviour, the man of peace who would do everything in his power to protect the people he led.

The midrashic literature is made up of many different reflections on the Bible. These were originally composed over a period of several centuries, probably as sermons or lectures. Later editors took these passages and published them together in chapters, as a running commentary. Each reflection was originally composed independently; it is not generally possible to identify a single theme that links together all the passages in any particular chapter of the Midrash. But sometimes a theme does appear.

Just before the passage in which the Midrash tries to explain why Aaron made the Golden Calf, is a long disquisition extolling the importance of peace. It brings examples from the various places in the Bible of people telling white lies for the sake of peace; it notes that all prayers end with a yearning for peace, it ends by quoting Isaiah, that the Messiah will be the harbinger of peace.

This passage, and that explaining why Aaron made the Golden Calf, are linked. Aaron was acting against his own self-interest, in the quest for peace, the greatest of all virtues. It was this that qualified him to become High Priest, it was this that erased his culpability in the making of the Golden Calf. The Mishnah, in the section known as Avot exhorts us ‘be like the disciples of Aaron, loving peace, pursuing peace and loving humankind.’

There is little justification in the biblical narrative for such a rehabilitation of Aaron. But the fact that Aaron has acquired a reputation in Jewish consciousness as the man of peace shows the extent to which the interpretative tradition influences and bolsters our world view.

And of course Aaron’s great act of peace, as recorded in the Torah, was to stop the advance of a plague. Despite the risk to his own life he placed himself between the living and the dead, causing the plague to halt. We read that as a story. But the story has come true.

Our sad and puzzled world is full of people acting like Aaron. Their selfless actions give us hope for humanity. We owe them our gratitude.