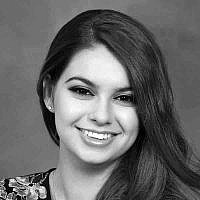 The Blogs
Samantha Gabrielle Ferszt
Writing to give you something to think about.
Apply for a Blog
Advertisement
Please note that the posts on The Blogs are contributed by third parties. The opinions, facts and any media content in them are presented solely by the authors, and neither The Times of Israel nor its partners assume any responsibility for them. Please contact us in case of abuse. In case of abuse,
Report this post.

When I was around 12 years old, my mother decided that it was time to put my education first and have me move schools. All I understood at the time was that I wasn’t going to be with my friends anymore and that I would be moving into a more “goyish” environment. Little did I know my entire world view was going to shift drastically.

My mother and I converted when I was very young, and I’ve since been brought up in a Jewish household with major Chabad influence. We went to Chabad Shuls and I always attended Chabad schools until the middle of the 7th grade. My mother has always been an advocate for education, and the most important thing to her was that my sisters and I become well-educated women while at the same time not having to sacrifice our religious values. The moment she realized that I wasn’t being “pushed” enough to do my best, I was switched to a Modern Orthodox school in our area.

At first, I thought my mother was jeopardizing our Jewish values for the sake of education. I had been told for years that anything outside of the Lubavitch school system was essentially wrong, and if I went anywhere else I would be “fried out.” I was scared of losing my friends and my status as a “real Yid.” I wrestled with the idea of going for months, and I begged my mother not to switch me. I told her I didn’t want to leave my friends, and that I wanted to stay. I didn’t care about education simply because I didn’t understand what she was talking about.

Needless to say, despite my attempts at foiling what then appeared to be my mother’s “evil plan,” I was brought in to interview with one of the most genuine women I have ever had the pleasure of meeting, along with a rabbi who, in my opinion, is the epitome of what a rabbi should be. They didn’t treat me any differently than they had treated any of the students I saw them greet in the hallways, and I was astonished that there was a rabbi addressing me specifically. I was oddly comfortable in that office, there was something about the atmosphere that just melted away all my suspicions and prejudices. After what felt like days later, I was dressed in a brand-new uniform, on my way to a brand-new school. During my first day there, I was confused to find girls whose skirts were above the knee and wearing short-sleeved shirts, and the boys interacting with them. But the strangest part of all was that despite my adaptation to the uniform in order to make it more tzniut, despite how different I looked, I was still treated as though I were exactly the same.

It’s been nearly six years since that change, and I have since been blessed enough to meet people from all sections of Judaism. As our friendships blossomed, so did our understanding of one another. The politics didn’t matter, and the prejudices were stripped away. Our friendship wasn’t dependent upon where we came from or what we believed, we were joined by a common denominator. I finally understood it all on a Shabbat afternoon, during a conversation with a friend of mine on the differences between Chabad and Kabbalah.

It wasn’t the clothes that mattered, and it certainly wasn’t where we chose to pray. It was the Neshama.

We have been taught since we were in nursery about Ahavat Yisroel, and that the sooner we came together, the sooner Mashiach would come. As children we sing songs with words from great rabbanim like the Ba’al Shem Tov, who said that “a soul enters this world for 70 or 80 years, just to do a favor for another,” and Rabbi Akiva, who said that Ahavat Yisroel is a “major principle of the Torah.” We were taught that the sooner all of Klal Yisroel joined forces and united as one nation, we would finally be redeemed from this Galut that we are currently stuck in. While Halacha may state that there are certain ways to observe the laws of Shabbat, Kashrut, Tznuit, and so on, the Torah itself states that we are to “love your fellow like yourself,” (Sefer Vayikra, Perek Yud Tet/19, Pasuk Yud Chet/18). The Zohar brings forth the idea that Ahavat Ha’Torah, Ahavat Hashem, and Ahavat Yisroel are all one. If someone is able to hold onto one, the others will fall into place. Having Ahavat Hashem, a love of God, will lead to Ahavat Ha’Torah, a love for his Torah, and his Torah teaches that we are to have Ahavat Yisroel, a love of our fellow man. It’s an unbreakable cycle that has the power to form an unwavering bond.

In the Ma’amer Heichaltzu, Rabbi Sholom Dov Ber of Lubavitch, better known as the Rebbe Rashab, talks about how Ahavat Yisroel isn’t just a thing to study, it’s a challenging topic that we need to apply to our daily lives. He said, “although ‘love your fellow as you would yourself’ is the great underlying principle of the Torah, actually achieving this love is a profound challenge for most people.” We as Jews should make a daily effort to strip away the outer layers, and focus on the Neshama within. And finally, the Alter Rebbe added an entire chapter to the Tanya which talks about Ahavat Yisroel. Chapter 32, the Gematria of which means ‘Lev’ (heart), was added after the Tanya was published because the Alter Rebbe knew no work would be complete without this underlying rule. It says, “the differences between his own soul and that of his fellow surely will not diminish the love between them.”

We all get so caught up in our titles and our labels, thinking that those are the only thing that matter. For some reason, we managed to shift our focus away from what we were taught as children, what really matters. All Jews have one underlying factor in common, our Neshamot. Our Neshamot are what connect us and unite us as a nation. It’s not the way we interpret the Torah, and it’s not how tzanua we dress. It’s time that we put away our precious titles, and step out of our own ‘communities.’

As of 2012, the Association of Religious Archives calculated that there were 662,450 Jews living in Los Angeles. According to them, the city of Los Angeles is home to the fifth largest Jewish community in a metropolitan area. 662,450 Jews, a number that has grown exponentially, all divided up into their own subsections. The only community that should matter is the Jewish community, not Modern Orthodox, Chabad, Kabbalah, or Conservative. We are all Jews, whether we believe in the teachings of the Lubavitcher Rebbe or the teachings of the Vilna Gaon, whether we study books written by Rav Berg or by Rabbi Steinsaltz. It doesn’t matter where we pray, what matters is that we pray. Which Jewish school we get our Jewish education from doesn’t matter, it matters that we teach and encourage our children to love God, his Torah, and his Mitzvot. And I find it incredibly inspiring that it took me moving to a school named after the man who made the concept of Ahavat Yisroel his ‘golden rule’ in life to finally understand it’s true meaning.

About the Author
Born and raised in Los Angeles, California, making my way through the world and formulating my thoughts and opinions, particularly on the two topics considered more “taboo” for table discussions; religion and politics.
Related Topics
Related Posts
Comments