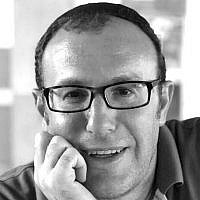 The Blogs
Binyamin Margo
Apply for a Blog
Advertisement
Please note that the posts on The Blogs are contributed by third parties. The opinions, facts and any media content in them are presented solely by the authors, and neither The Times of Israel nor its partners assume any responsibility for them. Please contact us in case of abuse. In case of abuse,
Report this post.

Sometimes it’s important to step away from the desk and walk the streets. I find that there is a growing disconnect between the Chief Rabbinate in Israel and the people they are suppose to represent.

In Israel there are some interesting trends taking place. Its been years since I read a report published by the Guttman Center for Public Opinion on a growing shift in Israeli religious identity from secularism to traditionalism. In 2012 the Israel Museum produces one of its most successful exhibitions called, “A World Apart Next Door: Glimpses Into the Life of Hasidic Jews” where approximately half million guests visited during the six month exhibition to learn and see how Hasidic Jews live. I have also written on my blog (My My, How Things Have Changed), how groups of religious pioneers through organizations like Rosh Hayehudi and Shalve HaTorah continue to develop new religious communities in cities throughout Israel including Ramle, Lod, Bat Yam, Tel Aviv, Yaffo and Akko, all of which have been embraced and even supported by local municipalities and  various ministries. “They are good people, hard working and move things to a new standard” said one council member from Lod. “In a sense they are reviving the community without imposing anything on anybody”.

In 2005 I participated in the Pidyon Haben of Elena’s son. They immigrates from the former Soviet Union with hopes of claiming that which was denies them for so long. Elena was part of a program created by Machon ITIM to help Russian immigrants navigate the Rabbinate when she discovered that her son qualified to be redeemed as a first born son. At the ceremony she told the guests, “when we came to Israel we were offered housing, education, money, cars and employment all of which we had in Russia. But the one thing we were not given was that which was denied to us in Russia – Jewish tradition and the Torah”.

It’s ironic that the most popular T.V. series in Israel include Srugim – a drama series which deals with the life of religious bachelors from Jerusalem; Shtisel – a fictional ultra-Orthodox Haredi Jewish family living in the Geula neighborhood of present-day Jerusalem and Shababnikim, features a group of four Haredi students who study at a yeshiva in Jerusalem.

What this tells me is that the Jewish nation is curious and interested in their heritage if only presented correctly.

Yet when I listen to the Chief Rabbis of Israel they seem to be at war. At war to save Judaism and God from everyone and everything. They talk about mandatory Shabbat observance, monopoly over conversion and the rejection of Conservative and Reform Jews. These are but a few issues in the headlines these days. But their absolutist approach has caused Jews in Israel to consider civil marriage in Cyprus, systematic discrimination against Ethiopian Kessim has forced the Supreme Court to intervene and the alienation of North American Jewry who don’t fit their subjective standards have all led to the Rabbinate being put under the Prime Ministers Office for supervision.

The main reason they fail to lead the nation is because the Rabbinate in Israel has no written mission statement or vision published anywhere. They merely advertise themselves as a service provider similar to a plumber or telephone company.

I think we are at a new tipping pointing in Jewish history. In the past Jews broke away from tradition to find a better life outside the shtetel, poverty and antisemitism. Today the Jewish people live a different reality which should serve as a unique opportunity to unite a fractured nation. The State of Israel should be viewed as the playing ground to actualize this reality. I think that the Chief Rabbinate will either have to be dismantles or find a new approach that speaks to the hearts and minds of Israelis and world Jewry. There is no reason why the Chief Rabbis of Israel should be so suspicious of everyone’s intentions. God and Jewish tradition does not need soldiers. It needs a voice that speaks to the concerns of the individual and community. Elijah the prophet was rejected because he was too stern and critical of the people. He was therefore succeeded by Elisha who was characterized as warm and accepting of all people.

I believe that we are here today in the merit of strict Jewish observance but I support alternative certification for kashrut, women involvement in areas of religious law and the responsibility of the Rabbinate to unite the diaspora and Israel and Jews of all beliefs. Israelis love Judaism but dislike religious authoritarianism and political pettiness.

We recently witnessed a tragedy turn into one of the greatest miracles of the year. Navy Seals struggled and triumphed to save twelve Thai soccer players trapped in a cave.  Armed with attitude, international cooperation and the will to succeed, they pulled off one of the greatest rescue efforts ever. The Chief Rabbinate needs to behave more like Navy Seals and learn from their motto, “The Only Easy Day Was Yesterday”, “It Pays to be a Winner”!

About the Author
Originally from Montreal Canada Binyamin lives in Jerusalem with his family. A social activist and educator by nature. In his free time he enjoys teaching and writing on a wide range of issues.
Comments