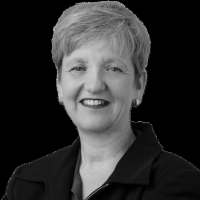 The Blogs
Tamar Krongrad
Apply for a Blog
Advertisement
Please note that the posts on The Blogs are contributed by third parties. The opinions, facts and any media content in them are presented solely by the authors, and neither The Times of Israel nor its partners assume any responsibility for them. Please contact us in case of abuse. In case of abuse,
Report this post. 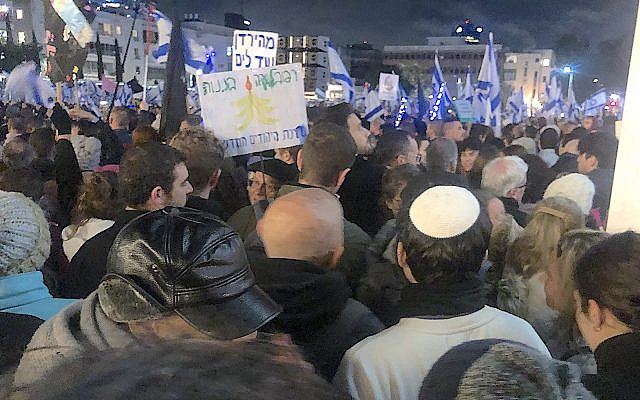 Demonstrators protest against the Israeli government at Habima Square in Tel Aviv, on January 14, 2023. (The Times of Israel)

To be clear, I am not a religious Zionist. Just a plain ol’ secular Zionist – a lover of Israel. The granddaughter of Ephraim, Nechama, Miriam and Haim – pioneers in Palestine who arrived in the early 1930s – all of whose families perished in the hells of the camps. I write their names because the winds of insanity are swirling around us – and I need to cement their names. To say to you: they were here. And this Israel is not what they came for, not what they fought for.

My grandfather Ephraim came from a Hasidic family. He left the fold but when he set sail for Palestine, his father sent him off with these words:: “Be a good Jew.” And indeed my grandfather encapsulated the very best that Judaism has to offer. The legacy of “being a good Jew” became a part of our family DNA, and is written on Ephraim’s tombstone. “A Good Jew.” יהודי טוב

My grandfather married my grandmother Nechama, and they had 2 sons, Ehud and Aharon. Both deceased (Z”L) but unlike my father who died in old age, Aharon lost his life fighting for this country in 1973. My grandparents never recovered from this incredible loss, but they kept going. They worked hard, all for the sake of their children, grandchildren and their country. They loved this country. And I speak in their blessed names when I say that this is not what Aharon died for.

As Jewish wanderings happen in life, I grew up in the USA, raised on the stories of the Jewish homeland – kibbutz, comradery, and friendship. I was one of the lucky Jews in the prism of time knowing that we, after 2000 years, had a land of our own, a land that we could go to – and indeed, I did come back to, 30 years ago. A never perfect country, with problems that could fill up pages on end. But the basic tenets of democracy, the checks and balances, the Supreme Court were sources of pride. I was (and still am) friends with people of all flavors and tastes of Israeli political and religious leanings – because at the core, we believe in the same values.

I built a home. I built a career. I raised my family. All here. And while we (myself included) were sleeping, the anti-democratic forces planted their evil seeds. And I watch in horror and disbelief (and alot of anger) as the Israel I love comes crashing down.

“We all bow to the law, and the law does not bow to us.” (Supreme Court Justice, Hon. Alex Stein)

So, you, I am calling you, religious Zionists, to say no. I urge you now, to say enough – this is not in your name. Show your support for Rav Lau’s words. Show me (and probably more effective, show the government) that you will not stand idly by. Show the government that we are not Poland, Hungary or Turkey. Come proclaim that you support the checks and balances system, that you reject ultimate control for the legislature. Come support basic protections for all inhabitants of this land. Let us stand together, religious and secular, in denouncing the evil that threatens to destroy us all.

I write this not by choice, but because my destiny is to be a good Jew.

About the Author
Tamar Krongrad heads the Commercial Cross Border Practice at Tadmor Levy, one of Israel's leading law firms, and is co-founder of 'Women in Law,' a group of English-speaking female attorneys who professionally support each other.