While many consider this dramatic decision, of UN Resolution 181, a miracle, it was the culmination of months of desperate, feverish lobbying in many “key” countries, whose “yes” vote was far from a foregone conclusion, particularly among the Latin American bloc.

But none of this would have happened if not for one man, who has since been forgotten.

Nachum Goldmann was a lifelong Jewish and Zionist activist and founder of the World Jewish Congress. He was born in Lithuania but grew up and was educated in Germany. After being stripped of his German citizenship in 1935, he was granted Honduran citizenship and later moved to America, in 1940. In the aftermath of the war, upon witnessing the plight of Jewish refugees in post-war Europe, he became instrumental in the creation of a committee for the rescue and rehabilitation of the remnants of the Jewish people stranded there. He was a prominent lobbyist for Zionism, and a leading jurist, much respected in legal circles in America. 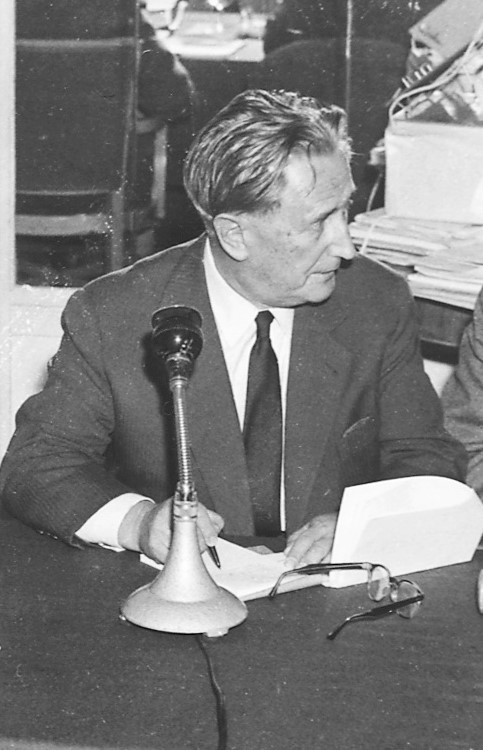 Nahum Goldmann, the founder and longtime president of the World Jewish Congress, in 1958. (Courtesy of the Times of Israel. Photo credit: Courtesy Claims Conference via JTA)

The year was 1946, a little more than a year before the fateful vote, and the Zionist dream of a national homeland was at a nadir – when the necessity for it could not have been more urgent. For it was in 1946 that the revelations of the extent of the horrors of the Holocaust were just coming to light, and tens of millions of displaced persons roamed Europe, hundreds of thousands of them Jews. These Jews, released from the Concentration camps, now found themselves in detention camps. After such horror and intense suffering, release from incarceration and freedom still eluded them. They were homeless, either unwilling or unable to return to their lives before the Holocaust. This made the necessity for a Jewish state imperative.

But achieving it seemed out of reach.
– The British Labor Party and its pro-Arab Foreign Office had intensified the blockade of Jewish immigration to Palestine, stopping and diverting the ships, loaded with desperate survivors seeking refuge in the only place in the world where they believed they could be able to live without persecution, to Cyprus or Italy.
– The Yishuv in Palestine had just been dealt a critical blow by the British. In response to the Hagana’s blowing up of bridges linking Palestine to neighboring countries, and the kidnapping of six British officers by the Irgun, the British Army launched a massive raid on the Yishuv. It has gone down in history as the Black Sabbath. 2700 members of the Yishuv – including leading political leaders – were arrested, and precious arms and ammunition, vital for the protection of Yishuv settlements from Arab marauders, were confiscated.
– The British and the Americans had just published the Morrison-Grady recommendations, which would allow for 100,000 Jews to immigrate to Palestine. Only 100,00 out of more than 250,00 registered displaced Jews in Europe and hundreds of thousands more, who were undocumented. And it also ruled out the possibility of an independent Homeland.

Against this depressing backdrop, Zionist leaders met in Paris to discuss the predicament of the fading possibility of the creation of a Jewish state. The atmosphere was desperate. The debates, panicked and frenetic. They were at a loss as to what to do.

And then Nachum Goldmann rose to speak.

Addressing the meeting, he said “I have been told by my contacts in the American government that President Truman is having second thoughts about the Morrison-Grady plan. Our time is running out; if we do not make a final decision right away as to our realistic demands, we might miss a one-time historical opportunity.”

The room became tense. What was “the decision”? All those in the room knew what he meant. For years, since the Biltmore Conference in 1942, where it was decided that the Jewish National Home must include all territory from the Jordan River to the Mediterranean Sea, Zionist leaders had been avoiding the elephant in the room; having to decide to agree to divide the territory in order to facilitate the establishment of a Jewish state. Many saw the decision to agree to anything less than what was promised in the Balfour Declaration, a betrayal of the Land of Israel, a betrayal of Zionism. Not to mention that it would create a split in the Zionist Organization. For those assembled, this was a Solomonesque decision. No less.

Goldmann passionately argued that they had to let go of the dogma that the future state must include all the territory, and face the prospect that if they did not agree to partition, the dream of creating a Jewish state would be doused. And that would mean that they would be responsible for the abandonment of hundreds of thousands of Jews, left homeless and with nowhere to go.

On August 5th, 1946, after two days of heated debate, with emotions running high, the Zionist leaders hastily composed a proposal that Goldmann hurriedly took to Washington. In essence, it was the Partition Plan. Upon receiving the proposal, and after some deliberation, President Truman canceled the Morisson-Grady recommendations.

What followed was the UNSCOP report and recommendations, and the historic vote in the United Nations on November 29th, 1947, when Israel was born. 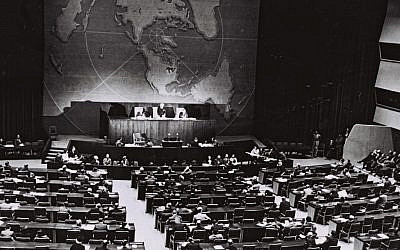 UN General Assembly, the Partition Vote, November 29, 1947. (Courtesy of the Times of Israel and the Government Press Office, Jerusalem)

It took one man, Nachum Goldmann, with a pragmatic vision, who understood that the imperative necessity of there being a Jewish homeland, was more important than territory. He changed the course of our history.

Goldmann never sought acknowledgment for his role in Israel’s creation. He never made Aliya. His contribution to Israel’s creation has for decades been downplayed, and whether by design or neglect, has been all but forgotten. Although he was buried on Mt. Herzl, no Israeli official attended his funeral. But if it wasn’t for him, it is likely we would not be here today.

So, I ask you today, to remember this forgotten founder.