The Blogs
Michal Cotler-Wunsh
Apply for a Blog
Advertisement
Please note that the posts on The Blogs are contributed by third parties. The opinions, facts and any media content in them are presented solely by the authors, and neither The Times of Israel nor its partners assume any responsibility for them. Please contact us in case of abuse. In case of abuse,
Report this post.

This week I had the privilege of fully understanding the concept of intergenerational connectivity. In the relay race of the overall advancement of mankind, I was offered a peek into my own role on the planet, in the handoff of the baton from generation to generation. I also received a necessary dose of hope in remembering what education is all about.

This week, I had the distinct pleasure of taking my children to an honorary doctorate ceremony in which my father, Prof. Irwin Cotler, was honored by BGU as “an illustrious legal scholar who has dedicated himself to upholding justice and protecting the rights of all people.” Along with a wonderful, personable clip which exuded his warmth, humility and humor, they were afforded an insight into what he has ultimately dedicated his life. They publicly received the ethical will which he has inculcated into each and every one of his family members, students and friends:

“I think if I had a message, it’s not to remain indifferent. Stand up against injustice! Make sure that every day you do something to advance the cause of justice. I have hope that at the end of the day, the struggle for justice and human rights will be won.”

A highlight of the meaningful ceremony was the moment in which former Chief Justice, Prof. Aharon Barak, mounted the stage to robe my father. It was the hug between two colleagues and long-time friends that brought tears to the eyes of many. It was the fraternity and respect of two internationally acclaimed legal minds that have agreed and disagreed, always for the sake of deepening their understanding ad use of the law to protect, rather than harm; to defend rather than delegitimize. It was the sheer humanity that evolved from a shared passion for the pursuit of knowledge and justice that allowed all those present a peek into what education should be all about. 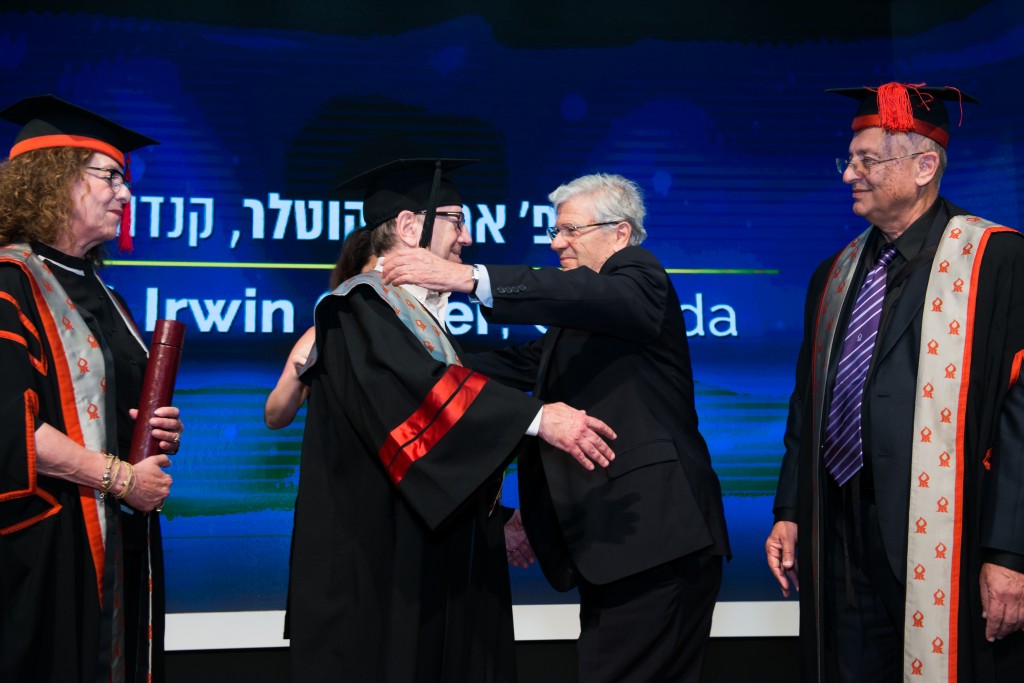 In reflecting further on the meaningful evening, it occurred to me that in attending this ceremony, we were privy to another essential reminder regarding the true purpose of university education. The honorary degrees were conferred by the Ben-Gurion University to outstanding researchers in wide-ranging, diverse fields from tuberculosis, to ‘big data’ to astrophysics. What all the recipients had in common was their authentic quest for knowledge, not for the sake of argument but rather for the sake of the advancement of the wellbeing of woman and mankind. In the cacophony of campus blaming, naming and shaming, it was a refreshing and optimistic reminder of the true purpose of academic research.

Coincidentally, this event occurred on the very week that the Student Union (SSMU) of his alma mater, McGill University,  unanimously declared the “proposed” anti-Israel “Boycott, Divestment and Sanctions [BDS] motion,” unfair and unconstitutional. The motion, which has disrupted the campus for over 18 months, was exposed for what BDS in fact stands for, namely ‘Bullying, Demonization and Slander’. Modelling for campuses throughout North America and beyond the importance of standing up for what is right, and ensuring the creation of a safe, inclusive community for all, my father’s alma mater did his resounding message proud.

My Dad, a law professor emeritus at McGill University, former justice minister and attorney general of Canada, opened his convocation speech by quoting his parents before him. He quoted his father, who urged him to follow the Jewish tradition of the pursuit of justice, and his mother, who insisted that he engage the real world, combating injustice wherever it appeared. These lessons, this raison d’etre, were instilled by my grandparents and served as the inspiration for his involvement in the human rights struggles in the second half of the 20th century. My Dad, in turn, has passed them on to us. At the very same time as he delivered his convocation address, his 15 year old granddaughter, my daughter, gave her first TV interview, speaking up and advancing the possibilities of handicapped youth to receive an equal opportunity at summer employment. Equipped with this reminder of what education is all about, transcending boundaries of time, place and geography, we can and must continue the involvement in the human rights struggles of the 21st century.

On this day, in which Israel aches at the loss of innocent lives, I cannot help but wonder when it will be pronounced, clearly and unequivocally, that the global struggle for human rights in the 21st century must recognize and address the threat of education, incitement and acts of terror that shamelessly target civilians, regardless of religion, ethnicity or gender. Blinded by seething hate, the murderous terrorists that ordered a dessert moments before randomly opening fire on those seated at the tables around them, did not care if the Moslem bartender or waitress who had taken their order would be caught in the crossfire of their heinous crime. Those who abuse education to inculcate that hate, inciting to terror, glorifying its perpetrators and celebrating in its aftermath, must be held to the very same account that communist and Apartheid regimes were held to by the very same human rights activists and organizations around the globe. In remembering what education is all about, university Professors and students must be stand up against the true violators of human rights committed by state sponsored terrorism and incitement. Finally, each of us has a role to play in educating and standing up every single day for what is right and not remaining indifferent or silent, with profound hope to advance the cause of justice and protect the rights of all people.

About the Author
Former Member of Knesset Adv. Michal Cotler-Wunsh is head of the Nefesh B’Nefesh Institute for Aliyah Policy and Strategy.
Comments