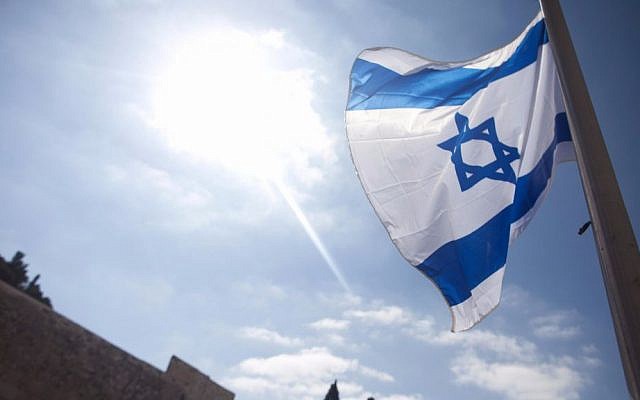 An Israeli flag at the Western Wall in Jerusalem on Holocaust Remembrance Day, April 24, 2017. (Lior Mizrahi/Flash90)

The Ukraine war and the refugee crisis it has generated is a sharp reminder that Israel as a modern nation has been built on tribes. Long before the creation of the state in 1948, émigrés from Russian pogroms against Jews brought a fresh European perspective to first Ottoman and then mandate Palestine.

They were followed by German immigrants or Yekkes the well-educated Jews, who anticipated the rise of Hitler and Nazism. Among other things they were responsible for the Bauhaus architecture at the core of Tel Aviv.

Tribes from all corners of the earth have arrived at the state during its modern history. The Jews of Arab lands expelled before and after the 1948 war. The brave and badly damaged survivors of the Shoah. And there have been arrivals from Africa, notably the Ethiopian minority, to this day fleeing starvation and strife. To this mix we must now add the refugees fleeing Moscow’s barbarous assault on Ukraine and those Jews in Russia wanting nothing to do with Putin’s tyranny.

On the recent mission to Israel, skilfully organised by Elnet UK, a group of British journalists (myself included) were exposed to Israel’s national security vulnerabilities, unrelenting violence against Israeli citizens and the diverse nature of Israel’s tribes.

The highlight for many of the group was a visit to an Iron Dome site on the Gaza border. Its primary task is to protect communities from Hamas. But the bigger threat are the 140,000 Hezbollah rockets, many of them with precision guidance systems, targeted on strategically sensitive infrastructure as well as civilians in Israel’s coastal communities.

In charge of operating these sites and keeping Iron Dome reloaded were a group of bright young Israeli Defense Forces (IDF) recruits, each with their own ethnic stories. The immediate message for many from this defiant platoon was the dedication to public service and responsibility. It is a sharp contrast to the 19- to 21-year-olds in Britain more interested in finding their way to the nearest university union bar or embracing ‘woke’ causes.

Among the IDF recruits was the daughter of recent Russian immigrants, the child of Moroccan-Jewish parents and products of Israel’s melting pot. A missing ingredient in this exposure to Israeli society was any attempt to put what we were witnessing in the context of the Holocaust and the deep-rooted commitment to survival that has engendered.

The first port of call for many overseas visitors to Israel is Yad Yashem. It is hard to understand Israel’s tribes and the far reach of Nazi outrages without this background.

There were some insights. At the Tura winery in the West Bank settlement of Rehelim, the Dutch born co-founder, Vered Ben-Sa’adon, sought to explain a family history of a Jewish father with a survivor history and a non-Jewish mother with a background of support for the Nazis. They decided to bring their offspring to Israel and to fully convert them to Judaism.

The thread of the Shoah is one that binds together much of Jewish-Israeli society. What caught me by surprise during the visit is how little second generation children of concentration camp victims know about family history.

Historically there was reluctance in families, like my own, to talk to children and grandchildren of the ghastliness of their experiences. Yad Yashem is among the great repositories of stories from hell not told in polite company. A cousin, in high office in Israel, acknowledged an information gap. Another said it was necessary for them to consult the museum archive to know what happened to their parents.

Remembrance is the glue that best helps to explain the values and defiance of the diverse tribes of Jewish Israel.