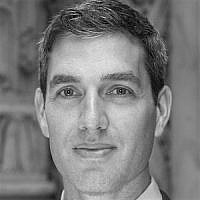 The Blogs
Elliot J. Cosgrove
Apply for a Blog
Advertisement
Please note that the posts on The Blogs are contributed by third parties. The opinions, facts and any media content in them are presented solely by the authors, and neither The Times of Israel nor its partners assume any responsibility for them. Please contact us in case of abuse. In case of abuse,
Report this post.

One of the most gracious and memorable invitations ever extended to me was when Rabbi Dr. Eugene Borowitz, z”l, invited me to teach one of his classes at Hebrew Union College.

Dr. Borowitz, who died two weeks ago at the age of 91, was one of the most, if not the most influential American Jewish theologian of the past several decades: the chief ideologue of the Reform Movement. The author of more than twenty books and hundreds of articles and essays, Dr. Borowitz has shaped the thinking of generations of rabbis and their students, within the Reform Movement and well beyond.

A few years ago, with the encouragement of the synagogue, I put together a book of essays entitled Jewish Theology in our Time. It was a thrill like no other to discover that the volume had become assigned reading in Dr. Borowitz’s theology seminar for rabbinical students. You can only imagine how honored I felt when Dr. Borowitz reached out to me to co-teach the sessions covering the subject matter of my book and to offer my own assessments on the current state of Jewish theology. While I cannot claim we were close or that I was ever formally his student, since his passing I have looked back on my exchanges with him with great fondness, well aware of the rare privilege it was on those few afternoons to rub shoulders with one of the theological giants of our time.

Given the magnitude of his prolific career, it would be foolhardy and not a little disrespectful to try to distill the breadth and depth of Borowitz’s writing into a single sermon. Rather, I want to focus on one small volume, for which he won the National Jewish Book Award, that I think provides an entry into his assessment of American Jewry and his theology, as well as, in my estimation, the tools with which we understand the challenges and opportunities facing American Jewry today.

The book, published in 1973, is called The Mask Jews Wear: The Self-Deceptions of American Jewry. There was a time in Jewish history, Borowitz explains — in fourteenth- and fifteenth-century Spain — when Jews had to convert to Catholicism in order to survive. These Jews, called Marranos, took on a Catholic exterior, but on the inside remained steadfastly, albeit idiosyncratically, Jewish. (p. 10) Contemporary Jews, however, as products of emancipation and the Enlightenment, face a very different set of opportunities and challenges. No longer living in the insular shtetls or ghettos of Eastern Europe, we have emigrated — geographically, economically and most importantly, sociologically — into the freedom and allure of a cosmopolitan society that embraces Jews as Jews.

This warm acceptance has resulted in the rise of a new species of Jew, a “reverse-Marrano,” an American Jew who is openly and proudly Jewish on the outside but is, on the inside, estranged from his or her Judaism. In Borowitz’s estimation, it is the tremendous and unprecedented blessings experienced by American Jews that have ironically led to a Jewry detached from Jewish life and learning, alienated from the very religious heritage that prior generations had fought so valiantly to defend and preserve.

All of this, however, is only the beginning. Borowitz’s contention is that because our very freedoms have cast Jewry into a form of spiritual exile, we have constructed a series of masks, or, as my teacher Dr. Byron Sherwin, z”l, calls them, “substitute faiths,” compensatory gestures masking the self-knowledge that we are “not who we say we are.” (Sherwin, Faith Finding Meaning, p. 21ff)

On the most basic level, American Jews practice a sort of “chopped liver” or “lox and bagels” Judaism whereby we think that the thinnest manifestation of Jewish identity somehow serves as a substitute for substantive engagement with the riches of our faith and tradition. We are “reverse-Marranos,” proud of our Jewishness and of Jews – pointing to Jerry Seinfeld, Mark Zuckerberg and Ruth Bader Ginsburg, counting off Jewish Nobel laureates — an “Adam-Sandlerication” of Judaism that does not fortify the depth of our faith and is an altogether unreliable means to transmit it to the next generation.

Alternatively, American Jews will engage in what philosophers call the reductionist fallacy, mistakenly identifying (or reducing) the whole of Judaism into one of its parts. (Sherwin, p. 23) To take an easy example, we frame the argument for Jewish identity not on its merits, but in the language of Holocaust remembrance, the obligation to be Jewish lest we hand Hitler a posthumous victory. Or we throw our energies into identifying and fighting anti-Semitism, an altogether worthy cause, but a far cry from a positive argument for Jewish identity. I imagine if you were to ask many American Jews what defines their Judaism, they would cite ethics or Tikkun Olam, the obligation to mend the world, forgetting that one can, and many do, lead a moral life, feed the sick, and clothe the poor without being Jewish.

Finally, if you were here last week, then you will recall our guest speaker Jeffrey Goldberg pressing the point that in many quarters of the Jewish world, advocacy on behalf of Israel, important as it is (and it is), has become a vicarious expression of Jewish life, with the largest kosher chicken dinner of the American Jewish year being at the AIPAC convention in DC. Neither support for Israel nor Zionism, for that matter, is a substitute for Judaism.

The list goes on and on, and please do not misunderstand me, each expression is important; I personally sit on the boards of the UJA, the ADL and the JDC, and I will be eating that chicken dinner at AIPAC this year. Borowitz’s point is that these civic or secular or institutional behaviors and associations — in and of themselves — are not Judaism. They are substitutes, masks by which an alienated American Jewry compensates for not living a vibrant, engaged expression of our Jewish faith.

Fair or unfair, agree or disagree, as a Conservative rabbi, the most interesting thing I can say about Borowitz’s diagnosis of American Judaism is that it comes from the pen of the chief ideologue of the Reform movement. The shibboleth of the Reform movement is “personal autonomy,” often understood to sanction a “cafeteria style” of Jewish living, whereby one can pick and choose, mix and match Jewish practice and ritual, or even choose not to practice at all. How do we square Borowitz’s sober characterization of American Jewry with Reform Judaism’s affirmation of every Jew’s right to make decisions as to how to express their Judaism?

When speaking of Borowitz’s theological legacy, we do him a great disservice if we limit ourselves to his critique of American Jewry. From a brief article he wrote in 1961 and into the decades to come, Borowitz sought to inspire American Jewry to adopt what he called “Covenant Theology,” a theology that “rests upon a reaffirmation, in contemporary terms, of the Covenant of Sinai.” Just as a covenant between two people demands a give and take, a willingness for ongoing dialogue and dialectic, and a certain elasticity to allow for the possibility that tomorrow we may be different than we are today — all the more so between a Jew and his or her God.

In Borowitz’s own words, such a theology is “a way of living one’s life based on a relationship with God, a relationship in which the whole self is involved.” As with any relationship worth having, the bond cannot be distilled or reduced into any single aspect. A covenantal relationship with God, akin to the compendium of laws in our Torah reading this morning, runs the gamut, including ethics, the holiday cycle, faith, ritual observance, the promise of the Land and beyond. Each of these categories is an essential building block of Jewish life. And as in any I-Thou or intimate relationship (Borowitz was influenced by Martin Buber), the impetus for why we do what we do as Jews comes not by way of a top-down command, but by our seeing our choices as opportunities to give full expression to the covenantal relationship we share with God.

As a Reform theologian, Borowitz is faithful to the notion of personal autonomy; he knows that American Jews will ever seek to negotiate our American and Jewish selves. It is by way of our personal conscience that we can hear God’s command, that we can give the relationship expression, and that we can continue to grow in relation to God. Finally, Borowitz makes clear that God’s covenant is not made with the individual Jew but with the Jewish people as a whole. Although being a Jew may begin with the individual, “Jewish existence is not merely personal but communal and even public.” (“The Autonomous Jewish Self” in Modern Judaism 4:1, February 1984) Being a Jew means believing that one’s personal destiny is tied into a narrative longer and larger than one’s individual well-being. It is not either/or. A fulfilling Jewish life exists within a set of concentric circles, ever tethered to the Jewish community, and always anchored in empathy with our common humanity.

In rereading Borowitz these past weeks, I have been struck by a feeling akin to whiplash. On the one hand, I hear the voice of a post-Holocaust theologian, a man whose major writings reflect a time and place far removed from the present. On the other, the prophetic element of his insights is altogether jarring, in that both his descriptive assessments and his prescriptive recommendations strike me as eerily oracular. Are we not, I wonder, in desperate need of the faith that Borowitz describes?

This morning, we read of the Children of Israel standing at the base of Mount Sinai, the record of the covenant spoken aloud in the presence of all. Famously, Israel responds with just two words: na’aseh v’nishma, we will do and we will listen. The order of the words, as the sages note, is not what one would expect. It would have been far more sensible for the Israelites to first hear the content of God’s law and only then agree to observe it. And yet, we are taught, their faith was of such quality — so earnest, so eager to fulfill God’s law — that they entered into that covenant of their own free will and volition, seeing every command as an opportunity to be drawn closer to the divine will. Our task, our opportunity, is no different today that it was for the Israelites of old. May our generation and the generations to come renew our covenant with God; may we gain sufficient confidence in our faith to dispense with the masks that we wear; and may the legacy of Moreinu HaRav Yechiel Baruch ben Binyamin u-Malkah, Rabbi Dr. Eugene Borowitz, continue to inspire us for generations to come.

About the Author
Rabbi Elliot J. Cosgrove, PhD is Senior Rabbi of Park Avenue Synagogue in New York City. He serves on the Executive Committee of the Rabbinical Assembly, is an officer of the New York Board of Rabbis, and is a member of the Council on Foreign Relations. He is the author of seven volumes of sermons and the editor of Jewish Theology in Our Time.
Related Topics
Related Posts
Comments