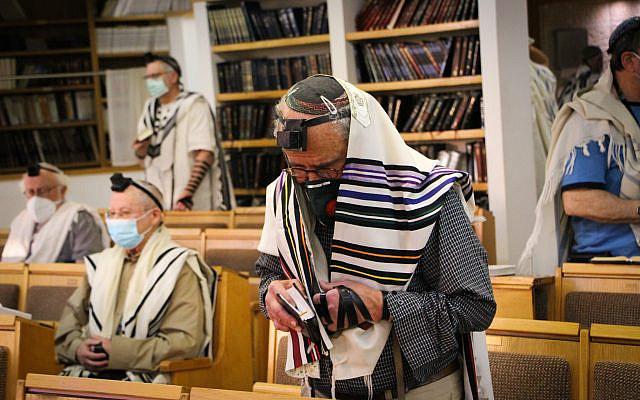 Israel’s COVID-19 re-openings have been driven by a culture of “It’s not fair” and “If he gets, so should I.” Weeks ago, it was complaints that protests were allowed but outdoor prayer was not. So then prayer was allowed, but then shops complained.

Then furniture shops reopened, and the whole country said “If IKEA can be open, why not my gym, nail salon or mall?” so gyms and malls opened and then people wanted to go to the beach. And beaches didn’t reopen, but nobody fined people who used them, and so other people said, “If beaches are open, why not synagogues?”

And now the new government, in one of its first acts, has reopened the synagogues, effective immediately.

There are rules: a limit of 50 worshipers, 2-meter distance between people, fixed places for the regular 50 attendees and, of course, masks. But given the low level of compliance with masks and distancing in basically every store, it is hard to believe that inside synagogues, people will be much stricter.

Opening the synagogues is a mistake.

Yes, Israel currently has a very low number of infections. But synagogues are perhaps the single most dangerous place, when it comes to catching the coronavirus.

In late March, the Israeli government’s Corona National Information and Knowledge Center published an epidemiological report that 24 percent of people who caught the virus inside Israel had done so at a synagogue, making synagogues the biggest source of infection, followed by hotels (15%) and restaurants (12%).

This should not be surprising. Synagogues are relatively crowded spaces, with many being no bigger than a classroom, and with poor airflow.

More than that, synagogues aren’t like lectures where the congregation sits silently. They include a lot of chanting, responding and singing, all of which can generate respiratory droplets that spread the virus.

Singing, in particular, can generate more of these droplets. One choir in Washington state met for a two-and-a-half-hour practice session, while maintaining some social distancing practices to avoid infection. 45 of the 60 choir members were infected that day from one person. Two of them died.

It is for this reason that in Germany, religious services started again a couple of weeks ago, but with no singing allowed. Here in Israel, no such rules have been introduced. Perhaps the government knew nobody would keep to them anyway.

Will synagogues and mosques really turn away that 51st person who wants to join the prayers? The open-air minyan outside my building never had fewer than 35 people, when the legal limit was 19, and it had well over 60 this past Shabbat. Hard to imagine a synagogue slamming the door on a man who wants to pray.

Will people really all wear masks throughout prayer? Again, shop workers and shoppers alike are wearing their masks on their chins in supermarkets, malls, and banks. It seems unlikely that they would suddenly start being strict about this issue in synagogues.

Will communities make space for women? Or will the 50 person rule effectively mean 50 men (and 30 children — I’m sure no synagogue will count kids towards their 50!).

Maybe none of this matters. On Tuesday, more Israelis died from the heatwave than of COVID-19. Maybe we really have beaten it, and so everything is safe.

Beaches, outdoor spaces, and large enclosed spaces like malls were relatively safe. Synagogues are the single biggest, riskiest thing to re-open. I hope I’m wrong, but If we haven’t really beaten the virus, or if it comes back, then reopening synagogues could also prove to be a big mistake that will cost lives.