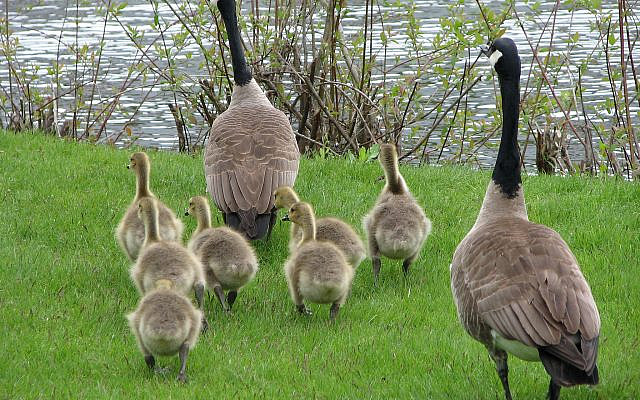 In a small shtetl in der heym, two families arrange with a prominent yeshiva to have two bochurim (yeshiva boys) matched as husbands for their daughters. Tragically, however, en route to the shtetl, their wagon is attacked by Cossacks, and one of the men is killed. When the survivor finally arrives in the town, a fight breaks out between the mothers of the two girls, each claiming that the young man is the intended groom for her daughter. The man himself is flummoxed and so the case is brought before the local rabbi.

The rabbi pours over the pages of the Tanach and, finally, he arrives at the solution.

In this case, we must rely on the advice of the wisest of all men, the great King Solomon. “Chop the boy in half!” he announces.

“Heaven forbid!” responds the first mother, “My daughter will give up her claim.”

“Go ahead and chop,” the other mother says.

The rabbi stands up and points to the second woman. “This one is the true mother-in-law!”

When a person gets married, he chooses a spouse. But, most of the time, along with the spouse comes an entire package that includes the person’s parents and family.  When not every new relative is your cup of tea, it’s tempting to think, “Well, I didn’t choose to marry the family. I’m not required to have a relationship with them.” But that’s not Judaism’s perspective. The word choson doesn’t just mean groom.  It’s also the word for son-in-law! The word kallah doesn’t just mean bride.  It’s also the word for daughter-in-law!

The Gemara teaches that not only must we have a good relationship with our in-laws, but we are actually obligated to honor them. Think about it this way: If, as our Gemara suggests, one is required to honor one’s in-laws by mourning for them after their passing, then how far must we go to accord them honor during their lifetimes? Most of us probably haven’t seen the practice of sitting shivah for in-laws, which is a minhag that has been lost to many communities. Nevertheless, the obligation to honor your father-in-law and mother-in-law while they are alive remains in place.

The tension that naturally exists between a child-in-law and parent-in-law has given rise to a host of jokes over the centuries. After all, laughter is often the best medicine. Hence, the variation on the famous King Solomon story told above. But the tension shouldn’t be minimized or made light of. It is real and normal and must be dealt with in a proper and respectful manner. Sometimes, it can be challenging to honor one’s own parents. It’s doubly challenging to honor someone else’s parents. But it’s a mitzvah and we need to go the extra mile to make it happen.

Perhaps, the greatest embodiment of this mitzvah was Moshe Rabbeinu. He was the redeemer of Israel. He was the lawgiver of Israel. He was the greatest prophet. And, yet, he was also a paragon of honor of his father-in-law. Prior to entering Egypt to lead the Bnei Yisrael to their freedom, Moshe parted company with his wife Tzipora and their two sons. He sent them back to Midian, to her father Yisro’s house. After the crossing of the Red Sea, Yisro escorted his daughter and grandsons to join the Israelite nation. Upon seeing his father-in-law, Moshe went out to greet him and bowed down and kissed him. Moshe wasn’t known to greet people with a kiss, but out of respect for his dear father-in-law, he made an exception!

And then, shortly thereafter, when Yisro comes and offers him advice about how to judge and teach the people, he rearranges the entire Torah system of justice to heed Yisro’s words. Imagine you’re the president and your father-in-law calls you up to tell you how to do your job, how would you respond? I honestly couldn’t tell you how I would respond, but I can tell you that Moshe Rabbeinu demonstrated the greatest honor towards his gentile father-in-law. He listened to what he had to say, and acted on it.

They say that the word “FAMILY” is an abbreviation for “Father And Mother In Law Yirau (shall be revered).” Honoring your in-laws actually consists of two important aspects. On the one hand, you are honoring them, but, on the other hand, it is also an opportunity to give honor and bring happiness to your spouse! That should be more than sufficient motivation to do your very best. And, at the end of the day, don’t you feel lucky to have your spouse? Your spouse is who he is because two individuals gave of themselves to create and rear a wonderful individual that you call your husband (or wife). May you forever show them respect, and may your sons-and-daughters-in-law ultimately treat you with the same respect!