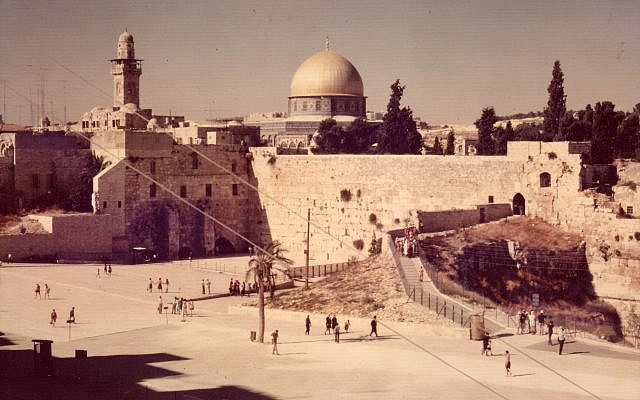 HaKotel HaMa'aravi (Western Wall) and Dome of the Rock - Jerusalem - 4 August 1974 Touring with Nahal Oz volunteers
There is a recent BBC article entitled “Israel-Gaza violence: The conflict explained.”
The article attempts to sum up what is currently happening in Israel in a few bullet points. Though some people summarize well, this particular BBC article does not. Here are some of the article’s quotes below.
Regarding Israel’s independence in 1948:
[Hundreds of thousands of Palestinians fled or were forced out of their homes in what they call Al Nakba, or the “Catastrophe”.]
This is true, but leaves out very crucial context. The vast majority of the Palestinian Arabs who fled were forced out was at the hands of Arab leaders who coerced many of them to leave on the promise that the Arab armies would wipe out the Jews and the Palestinian Arabs could return. Some managed to stay and their descendent are citizens of Israel today. The majority that left were not able to enter back in the country after Israel won, and the Arab leaders that made them leave never took them in either, though they were the ones that displaced them in the first place. At the same time, those same Arab leaders expelled other Middle Eastern Jews from those Arab countries where Jews at that point had lived for centuries. So almost 2 million Jews and Palestinian Arabs were displaced and of that 2 million, over 90% was due to the Arab leaders.
[Because there was never a peace agreement – each side blamed the other – there were more wars and fighting in the decades which followed.]
This is dangerously inaccurate and the most glaring issue with the “both sides are equally to blame” argument. There was an armistice agreement, which isn’t peace, but there was supposed to be no fighting. The Arabs constantly violated that agreement from 1948 until what escalated into the 1967 war. Syrian rebels were using the high altitude of the Golan Heights to shoot at Jewish families living in Kibbutzim in northern Israel. Egyptian terrorists were sneaking across the border into Israel in the middle of the night to kill a Jewish family, and then snuck back before sunrise. There were factions of terrorist groups within Israel that were stabbing and shooting Jews on the regular. The armistice was not really an armistice for the other countries. Just Israel. Israel rightfully blamed Arab aggression during this time.
[Israel still occupies the West Bank, and although it pulled out of Gaza the UN still regards that piece of land as part of occupied territory.]
This is also true, except for the occupation part. Israel gained that territory in a defensive war that Israel won. Jordan actually did illegally occupy Jerusalem and what many call the West Bank in what was supposed to be an armistice period. The true name for it is Judea. Calling it the ‘West Bank’ still implies that it belongs to Jordan since it is west of the Jordan river. That is colonialism. Judea is the indigenous land of the Jewish people.
[Things have escalated since the start of the holy Muslim month of Ramadan in mid-April 2021, with nightly clashes between police and Palestinians.]
This is probably the most disappointing part of the article. The writer could have had a chance to provide some serious context here, and they failed. “Things have escalated” is almost intentionally vague. On Ramadan, some of the Muslims had stones and molotov cocktails piled up in Al-Aqsa Mosque in Jerusalem, and were throwing them at Jews. This type of thing happens every year at Ramadan unfortunately, and not just in Israel. The Israeli police only came to stop the violence. Saying “things have escalated” would imply that both sides were simply fighting. That is a perversion of the truth.
[The threatened eviction of some Palestinian families in East Jerusalem has also caused rising anger.]
The eviction is a longstanding court case involving the remaining 4 Palestinian families who have not paid rent in over 40 years. The land was purchased by Jews, illegally occupied by Jordan (who expelled the Jews and housed Palestinians), reclaimed by the Jews in 1967, at which most Palestinian families moved out. The four remaining families have refused to pay rent. This isn’t a brand new phenomenon. It has been in litigation for decades.
This is the problem with the BBC article, Infographics, Teen Vogue, Trevor Noah, Bella Hadid, and any other figure or outlet attempting to present the conflict in SparkNotes fashion. They either intentionally or unintentionally fail to provide crucial pieces of context, misinforming the uninitiated. One crucial piece of context  being is the article written by a Palestinian activist named Bassem Eid, who talks about why Sheik Jarrah has become such a ginormous global issue, and how Palestinian leaders have made it so for their own agenda.
Knowledge is power, but that power cannot be attained simply through Instagram slides, though those can be a good starting point; it can only be attained with patient and thoughtful research.
About the Author
Joshua is the Director of the Institute for Black Solidarity with Israel (IBSI) where he plans events and speaks. He’s a composition graduate of the University of Pacific’s Conservatory of Music. Joshua was formerly IBSI’s Director of Special Events, and planned music performances featuring The Hebrew Project Artists (THP) across the country. Joshua is also a graduate of CUFI’s 2016 Diversity Outreach Mentoring Endeavor (DOME), where he received training in Israel advocacy for diverse audiences. He was chosen to travel to Israel twice; once as part of CUFI’s millennial outreach, Israel Collective, and again as part of a music performance with Victor Styrsky’s Wild Branches & Friends. His other musical endeavors include writing for the Boston Pops, and music directing for other artists. Joshua is also a featured author on a collaborative book called 'Israelophobia and the West: The Hijacking of Civil Discourse on Israel and How to Rescue It' by Jerusalem Center for Public Affairs official, Dan Diker.
Comments