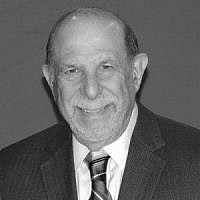 The Blogs
Mark S. Golub
Apply for a Blog
Advertisement
Please note that the posts on The Blogs are contributed by third parties. The opinions, facts and any media content in them are presented solely by the authors, and neither The Times of Israel nor its partners assume any responsibility for them. Please contact us in case of abuse. In case of abuse,
Report this post.

Once again, Daniel Gordis distinguishes himself as one of world Jewry’s most thoughtful and courageous thinkers. His recent piece in the Times of Israel (“Israelis don’t care that you’re insulted: An open letter to American Jews” – July 3, 2017) is brilliantly written and some of his salient points are gifts to American Jewry and to Diaspora Jewry world-wide.

With respect to the Israeli-Palestinian conflict and occupation of the West Bank, Gordis summarizes the American Jewish responsibility to Israel in marvelously succinct words: “Your job, more than anything else, is to help us stay safe and alive…What you owe the Jewish people is to keep the bad guys at bay.”

“Not all Jews are citizens of Israel,” Gordis writes, “but all Jews have a stake in the kind of country Israel is, particularly when it comes to its attitude to Jewish peoplehood.”

My only point of disagreement with Gordis’ argument concerns his encouraging American Jews to withhold financial support for the State of Israel and Israeli institutions.

Gordis cites his prior advice to American Jews (offered before the compromise solution of the creation of a third section at the Kotel at Robinson’s arch) that American Jews withhold giving monies to help fund Israeli hospitals.

Because Gordis wanted to punish Mr. Netanyahu (for the inappropriate appointment of an Orthodox Jew as Minister of Health), he was willing to let the Health Ministry suffer.

In his recent piece, Gordis encourages American Jews to punish the Prime Minister for backing out of the Kotel deal by using the power of their purse.

Gordis writes from an overwhelming commitment to the State of Israel, the Israeli people and the good of both. But it is also unquestionable that there will be American Jews who will use Gordis’ piece as a justification for their refusing to help fund UJA, Jewish Federations, and other Jewish agencies that help sustain Israeli and Jewish life.

Gordis’ position limits his stated principle — “Your job, more than anything else, is to help us stay safe and alive” – to the Israeli-Palestinian conflict alone.

Gordis’ profound articulation of Jewish responsibility should apply to every aspect of Israeli life – indeed, to every Jewish community in need.

Gordis’ call for American Jewish “humility” needs to extend to every aspect of Israeli life, even when American Jews are affected by a given policy.

This does not mean that American Jews should accept Israeli social and religious policy without expressing their strong dissent and opposition. Gordis cogently describes the lack of Israeli sophistication when it comes to Israelis’ understanding of the nature, strengths and integrity of American Jewish pluralism.

From my first trip to Israeli in 1970, I have argued there should be a third section at the Western Wall where I could stand together with my wife and daughters. I have been a public supporter of Anat Hoffman and “Women of the Wall,” and the right of women to pray at the Kotel wearing a tallit and to read from the Sefer Torah. For me, it goes without saying that non-Orthodox Jews should have a place at the most important Jewish symbol in the world, if not the holiest.

So of course Rick Jacobs, as Eric Yoffie before him (URJ); Julie Schoenfeld (RA) and Jerry Silverman (JFNA) have every right to join in a larger American Jewish protest of any Israeli policy that delegitimizes non-Orthodox streams of Jewish life. They have a responsibility to do so.

But there is one line they may not cross.

They may never make Israeli policy a rationale for American Jews to distance themselves from the State of Israel and the Israeli people!

They may never threaten Israel with less emotional or financial support because they feel insulted by a disproportionately small – but powerful – minority that is able to exercise “religious” control.

To the contrary; American Jewish leaders must be sure their membership knows that, whatever profound disagreements they may have with the way American Jewry is being treated, as Jewish leaders they would never encourage or support American Jews distancing themselves from Israel.

The New York Times published a story describing American Jewish reaction to the failed Kotel process on the same day Daniel Gordis published his piece in the Times of Israel.  The New York Times led with an account of a prominent American Jewish donor who demanded a refund of his $1 million Israel bond purchase.  Such a reaction is a tragic pity but I imagine the donor believed his demand would be applauded by Jewish leaders whom he respected.

We may fight the Orthodox Rabbinate and its stranglehold on aspects of Israeli life.  We may not abandon the Israeli people — and the Jacobs and Schoenfelds and Silvermans must make this point loud and clear!

Many Israelis have spoken about the Israeli political system and the deficiencies of a parliamentary government in which small parties wield disproportionate power because they are necessary to maintain the governing coalition.

This political system, however, is what the Israeli people are so far willing to tolerate.

Until the Israeli people change their political system, government after government will be forced to make concessions to small parties that sustain their coalition. The Netanyahu government was caught on the horns of this political dilemma.

It is, therefore, unfair to be part of a chorus vilifying Prime Minister Netanyahu. He is no less a political being than every prime minister (and American president) has been. His goal is to continue to lead the government just as every American president, of either party, tries to hold on to the reins of power.

Netanyahu faced one of two realities: to either follow through on his promise on the Sharansky compromise of an egalitarian section of the Western Wall and bring down his government or to negate his promise and maintain his government. He chose the former – as would most politicians world-wide and throughout history.

Might both Israeli and American Jews wish he had made the opposite choice?  Many would. But virtually none of us, are in the government or in Netanyahu’s shoes. Whether one likes or dislike Benjamin Netanyahu, his political decision in this instance is totally understandable in the world of real politick – and few, if any, would have acted differently.

Gordis suggests American Jews need more “humility” when it comes to telling Israel what to do in security matters and the Israeli-Palestinian conflict.  This same “humility” is needed here.

I want to reiterate.

I applaud any American Jewish expression of disappointment and a sense of betrayal by the Cabinet’s decision to refrain from implementing the compromise worked out for the Western Wall. I applaud every Diaspora attempt to argue for the realities of Jewish Pluralism and the legitimacy of non-Orthodox streams of Jewish life. There should be an egalitarian section at the Western Wall – sharing one access to all sections of the Wall and constructed as beautifully as the plaza that now exists at the Orthodox sections of the Kotel.

But American Jewish leaders should never suggest to their communities that Israel – and the Israeli people — merit one iota less emotional and financial partnership.

It is ironic that the suggestion that American Jews use the power of their purse to pressure Israel to adopt a given policy is exactly what most of us abhor and condemn in the BDS Movement, which also seeks to use financial power (of divestments, boycotts and sanctions) to influence Israeli policy. American Jews must find a means of protesting and influencing Israeli policy without resorting to our own form of financial “divestment” – which is exactly what the American Jewish donor did when he sought to revoke his $1 million in Israeli bonds

What leverage, then, do American Jews have if they can’t use the power of the purse; or threaten Israel with a loss of American Jewish support so that Jews will visit Israel less or no longer lobby for Israel in the halls of American government?

The only appropriate leverage American Jewry rightly has is the power of the argument.  In the long run, it is the Jewish righteousness of the argument that must persuade the Israeli people to take action.

If the Israeli people are not moved to care enough to demand change, American Jews will simply need to articulate their case better.

Finally, the way in which the problem of Orthodox monopoly in Israel is portrayed by Jewish leadership impacts American Jews who have never visited Israel in ways that are neither fair nor honest to Israeli life. Reading Gordis’ essay, many non-Orthodox American Jews will imagine Israel as a place where non-Orthodox Jews are regularly mistreated. They will imagine being uncomfortable anywhere they travel should they visit Israel.

Every Jewish leader – in America and in Israel – must make clear that when a non-Orthodox Jew steps foot in the State of Israel, that Jew will enjoy a wonderful experience anywhere throughout the Jewish state without ever experiencing a moment of discomfort.

This is the larger reality which must be the context in which this valid philosophical and practical issue must be discussed and confronted.

About the Author
Mark S. Golub is the President and Executive Producer of America's television network, JBS, which is a PBS-style Jewish channel available on various television providers, Roku and online (www.jbstv.org and YouTube JBSTV). Named by Newsweek magazine one of the 50 most influential rabbis in America, Mark is a graduate HUC-JIR in New York City ('72) and leads an independent chavurah in Connecticut which he founded in 1972. Mark is a graduate of Columbia College ('67) where he served as President of Seixas Menorah and as General Manager of WKCR-FM & AM while producing the longest running talk show in the station's history. During his rabbinic studies, Mark became the first assistant editor of Sh'ma magazine. After ordination, Mark became the Editorial Director and Director of Public Affairs for WMCA Radio in New York, then the leading telephone-talk station in the country. In 1979, Mark created Jewish Education in Media, Inc. (JEM) and the producer/host of its radio magazine, L'Chayim, which has not missed a Sunday since its premiere in 1979. L'Chayim's guest list reads like a "Who's Who" in the Jewish world and moved to television in 1990. In 1991, Mark created the first Russian language channel on American television, The Russian Television Network of America (RTN), to serve the needs of the Russian-speaking community of America. RTN has evolved into Russian Media Group, LLC which now licenses RTN to cable companies throughout America and Canada, and nationally distributes its own package of Russian channels to Russian speaking families throughout America. In 2006, Mark became the president and CEO of Shalom TV, the first Jewish network to be part of an American cable system's lineup of channel offerings (Comcast). Shalom TV has been renamed "Jewish Broadcasting Service" (JBS) and is now a 24/7 channel seen on such major television providers as Cablevision, RCN, Atlantic Broadband, Metrocast, Century Link and Google Fiber. When Mark is not producing television, he and his brother David produce Broadway shows and have won three Tony Awards ((The Gershwin's Porgy & Bess, Who's Afraid of Virginia Woolf and Vanya, Sasha, Masha and Spike. Mark is married to Ruth Ellen Gelman who is his partner in all his endeavors. They have five children and three grandchildren.
Comments