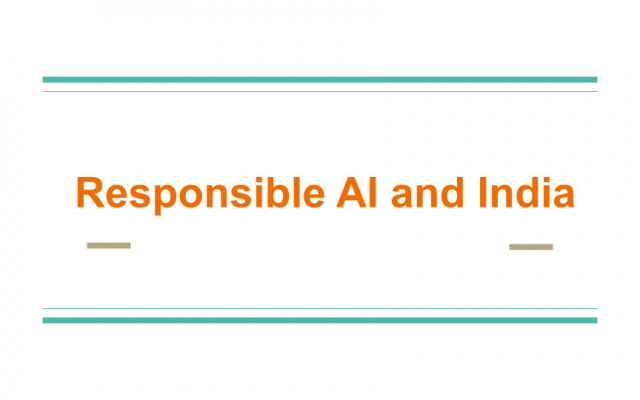 The goal of Technology is Success, but that success is for whom? The answer to this question can be a good starting point for a Responsible AI vision, developing which is still the responsibility of human intelligence.

Artificial Intelligence has produced many useful tools and devices for human use. Looking at AI as an increment in the continuous improvement cycle of computer science unlocks amazing opportunities for the future.

There are close to 1 billion people (15% of the global population) on earth who suffer some form of disability. And according to UN reports, in 2019, there were close to 703 million persons aged 65 or over in the world. Providing a few accessibility/disability features on their smartphones/devices is not enough. These billion and a half plus people are looking at AI efforts of the ‘able’ human minds with great hope and some of the applications of AI in the areas of expert systems, natural language processing, speech recognition, and machine vision, etc., still have a lot to do on their part.

AI is the product of the advancement in computer science, not its representative and like any other tech product, its usefulness for humanity needs to be checked and re-checked repeatedly, with an unbiased approach.

Current trends in AI development centered on four major themes: Internet, Business, Perception, and Autonomous Systems. And these trends produce some interesting headlines too, such as AI is beating Human players (in strategic maneuvers), AI is surpassing human doctors, solving decades-old biological research challenges, or producing the Humanoid capable of displacing us from our jobs and routine functions, etc. At the same time, there can be different perspectives to read these trends, which are often shaped by according to our worldview and socio-economic culture.

It is interesting to note that the global AI efforts were going on at their own pace till China had not entered the court, its entry into AI Game (more aggressively from July 2017) has changed the course of these efforts.

How China spoiled the GAME

If China would have not taken Alpha GO’s win over Chinese Go Champion Ke Jie so personally, the world would be at more peace with the AI! According to Dr. Kai Fu Lee, CEO of Sinovation Ventures and author of “AI Superpower” book, the AlphaGo victory “lit a fire under the Chinese technology community that has been burning ever since.” And he also writes that “when Chinese investors, entrepreneurs, and government officials all focus in on one industry, they can truly shake the world.” From 2017, China has accelerated the pace of AI investment and R&D activities on a historic scale. It is interesting to note that in less than two months of Ke Jie’s defeat from Alpha Go, the State Council of China launched the vision “A Next-Generation Artificial Intelligence Development Plan.” It describes AI as a “strategic technology” that has become a “focus of international competition” and projected that “by 2030 China would become the center of global innovation in artificial intelligence, leading in theory, technology, and application.”

The entry of this new aggressive player in the AI Game persuaded the other players to rethink/revise their approach. One can say that similar to defense and manufacturing supply chains China spoiled the spirit of healthy competition in this domain too.  Since 2017, both leading players of this race, the USA and China, have adopted a different kind of tone and their approach often reflects desperation to prove something that is yet to happen.

Both sides often tend to prematurely announce the outcomes of their experiments and technological investigations, such claims create an undesirable hype which in turn is harming the potential of this useful invention.

Today, Responsible AI is the latest buzzword in the industry, and all major tech companies have aligned their corporate strategy and vision to capture its spirit.  A typical responsible AI corporate vision includes the elements of fairness, reliability, safety, privacy/security, inclusiveness, transparency, and accountability. And to deal with the potential AI risks, some big tech companies have now started advocating for a Human-Centered Design Approach too.

Several governments and intergovernmental organizations have laid out their Responsible AI policy initiatives and ethics guidelines as well. In 2017, the European Council called for a “sense of urgency to address emerging trends,” and earlier this year, it advocated for freedom and human rights in its recently proposed AI regulations, which explicitly says “AI should be a tool for people and be a force for good in society with the ultimate aim of increasing human well-being.”

Last year, Nature (an international science journal) published a study titled “The role of artificial intelligence in achieving the Sustainable Development Goals,” which highlighted that “AI can actively hinder 35% of UN SDG targets (59 out 169)” and it also stated that AI requires “massive computational capacity, which means more power-hungry data centers and a big carbon footprint.”

In June 2020, India became one of the founding members of OECD’s multi-stakeholder initiative – Global Partnership for Artificial Intelligence (GPAI), which has the goal of “guiding the responsible development of the AI, grounded in human rights, inclusion, diversity, innovation, and economic growth.”

These discussions around making AI more responsible also highlight the silent acknowledgment of the fact that somewhere this tech innovation was not designed by keeping the elements of responsibility and accountability toward humanity in mind.

This new kind of urgency around AI’s responsibility issue raises some important questions related to the lack of leadership in global AI efforts too! It is important here to note that all these global forums bet on India, for presenting a template of Responsible AI for the world.

The story of Transforming India is a story of responsible use of digital technology too. In India’s Reform, Perform and Transform trajectory, digital technologies have played a significant part. With 130 crore Unique Identity numbers, 118 crore mobile subscribers, 80 crore internet users, and approx 43 crore Jan Dhan bank accounts, today India has the world’s biggest connected infrastructure and this infra is India’s key force in the fight against the corona pandemic too.

The difference in the approach of India and the West, on the questions of Responsibility reflects in their approach toward AI too.

In his 76th UNGA address, Prime Minister Narendra Modi talked about Pandit Deendayal Upadhyay’s Integral Humanism and he said “Integral Humanism is the co journey of development and expansion from self to the collective that is – expansion of the self, moving from individual to the society, the nation, and entire humanity.” Pandit Deendayal Upadhyay was of the belief that any system which obstructs the production activity of the people is self-destructive. He often used to say that “Man has stomach as well as hands. If he has no work for his hands, he will not get happiness even if he gets food to satisfy his hunger. His progress will be obstructed.”

This clarity guides the Responsible AI mission of India too. And it is this integrated viewpoint that makes India’s Responsible AI vision unique, practical, and more aligned with the key UN Sustainable Development Goals.

India believes that AI is a tribute to human intelligence and “the teamwork of AI with humans can do wonders for our planet,” as PM Modi rightly said at the RAISE (Responsible AI for Social Empowerment) 2020 summit.

When we minus the responsibility from technological innovation, we open up the gates for its weaponization. Are the benefits of Biotech research and experimentation are (in any way) lesser than Artificial Intelligence? In the continuing waves of the Corona pandemic, hidden a lesson for humanity.

‘Spiderman Ethics’ and dialogues like “with great power, comes great responsibility” have dominated the product/technology designs for decades, and we have seen their limitations too. To move forward from this point and for more clarity on ethical issues, a different kind of philosophy, mindset, and approach will be needed, and this is where India has a larger role to play!