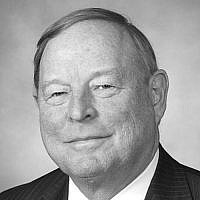 The Blogs
Norman L. Smith
Apply for a Blog
Advertisement
Please note that the posts on The Blogs are contributed by third parties. The opinions, facts and any media content in them are presented solely by the authors, and neither The Times of Israel nor its partners assume any responsibility for them. Please contact us in case of abuse. In case of abuse,
Report this post.

With a fifth election in less than four years looming, many will once again characterize the major issue as: “Bibi yes or Bibi no.”  This sound bite misleadingly focuses on Netanyahu the individual rather than the more recent pattern of behavior he now exemplifies.  Netanyahu’s prior devoted service to the State of Israel dissipated as his protracted tenure as Prime Minster wore on, reinforcing the compelling argument for term limits.  The long-extended benefits of office and his fans’ adulation have contributed to Netanyahu conflating and confusing his personal interests with those of the State turning him into the very antithesis of “Mamlachtiut,” a venerable and vital national ethos.

Prime Minister David Ben Gurion coined the term “Mamlachtiut” to concisely define certain values and practices.  An imprecise English equivalent is “statesmanship.”  Recognizing that Israelis were, and would likely continue to be, divided across many lines, Ben Gurion perceived the need for a guiding value system to prioritize national interests over narrow individual or community interests to unify an otherwise divided people.  An outstanding example of Mamlachtiut is the IDF, composed of soldiers of every demographic having differing and often conflicting interests, ideologies, values, cultures, and religions.  Yet, in the spirit of Mamlachtiut, as soldiers, they set aside any differences and unite to defend the State and the Jewish People.  Mamlachtiut has woven our People’s colorfully diverse fabrics into a magnificent tapestry of unprecedented accomplishment and resilience.

There are countless examples of Israeli leaders observing Mamlachtiut.  To mention a few: Menachem Begin rejecting internecine violence and giving up the Sinai despite enormous opposition; Yitzhak Rabin resigning rather than embarrassing the State; Yitzhak Shamir resisting popular pressure to retaliate against Iraq for launching missiles into Israel and Ariel Sharon alienating important constituencies to disengage from Gaza.

Nuanced concepts like Mamlachtiut are often best understood by what they are not.   Netanyahu’s conduct during the latter part of his extended tenure as Prime Minister demonstrates his conspicuous disregard for Mamlachtiut. Most prominently, his continuing refusal to stand down in the face of criminal indictment and trial on serious charges when doing so may have allowed the formation of a national unity government. He instead chose to subject the country to multiple elections and debilitating national divisiveness inevitably resulting from increasingly bitter elections. Rather than serve the nation, Netanyahu turned against it by adopting a strategy designed to avoid accountability by discrediting and sowing distrust in law enforcement and the judiciary – the polar opposite of Mamlachtiut.

If Netanyahu stands down (at least until the conclusion of his trial) a national unity government could be formed which would not be vulnerable and beholden to small extremist parties demanding ransom on threats of bringing down the government.  A Netanyahu led coalition of 61 or 62 mandates will be at the mercy of the Haredi parties and Ben Gvir.  Given that about 70% of voters agree on at least 70% of the issues, to be ruled by minority parties is appalling.

Instead of “Israel before all else,” Bibi will do anything to cling to power.  A prominent example was his refusal to pass a long overdue and desperately needed budget solely as a pretext to renege on a solemn pledge to relinquish the premiership thereby dissolving a unity government and necessitating a fourth election within three years and at a time the country was battling the pandemic.

Another more recent example is Netanyahu “legitimizing” and uniting Ben Gvir and his fellow extremists solely to secure more mandates, something likely to plague the country well into the future.

The damage Netanyahu wrought to benefit himself politically at the expense of the State did not end at our borders. To serve his own political interests, he severely damaged Israel’s historically bipartisan relationship with the U.S. by aggressively and counter-productively confronting a sitting U.S. President.  To secure Haredi political support he reneged on agreements regarding access to the Kotel turning this holiest Jewish site into a lightning rod of divisiveness rather than a symbol of unity and also alienating enormous numbers of Jews in the Diaspora.

Evidence adduced in Netanyahu’s criminal trial (proceeding while he was Prime Minister and now while Leader of the Opposition) embarrassingly alleges an unseemly lavish lifestyle and pattern of abusing his offices to procure cigars, champagne and other “gifts;” certainly not the behavior expected at Balfour.  It is inconceivable to even imagine any prior leaders of Likud behaving in the manner now accepted as the norm by Netanyahu.

Netanyahu’s 12 years as Prime Minister has inflicted such divisiveness, alienation and damage to our national character that it can be regarded as a security threat.  One prominent security establishment head recently observed that: “…the lack of political stability, internal division and the extreme discourse online serve as encouragement for the axis of evil, terrorist organizations and lone wolves.  Our enemies feel that our national resilience is vanishing…”

The choice for the electorate should be clear: statesmanship or self-interest; Mamlachtiut or malfeasance; national unity or causeless hatred.  Fortunately, we have a viable choice that not only bears the name Machane Mamlachtiut or National Unity but whose leaders exemplify Mamlachtiut.  The party’s leader, Defense Minister (and former IDF Chief of Staff) Benny Gantz, presciently understood that the Covid pandemic would be a long and hard war, would take many lives and would decimate economies, including our own.  Demonstrating Mamlachtiut and leading by example, he set aside his personal political interests to enter into a unity government with Netanyahu to spare the country yet another election which would have exacerbated the devastating pandemic.  Benny Gantz is the only party leader who is trusted, respected and most importantly, not disqualified by all mainstream parties.  He is therefore most qualified to lead a national unity government which almost all agree is desperately needed.  Another National Unity leader, Gideon Saar, also took the high road of Mamlachtiut to challenge Netanyahu’s leadership of Likud to save it from his ruinous influence all the while recognizing that he could be sacrificing his secure and prominent position within that party.  A recent notable addition to the Machane Mamlachtiut party’s impressive list of selfless and devoted leaders is Gadi Eisenkot who, like Gantz, has a storied history of life-long courageous and devoted service to the State, most recently as IDF Chief of Staff.

Consistent with the ethos of Mamlachtiut it exemplifies, the National Unity Party is truly a center party representing all elements of our diversity.  It is able to transcend the multiple divides and focus on that which unites us.  If one values Mamlachtiut and national unity, then it is time to decide whether Netanyahu and his ally Ben Gvir represent these values or whether it’s time to restore unity, decency, honesty and selfless devotion to the State of Israel as exemplified by the leaders of the National Unity Party.

About the Author
Norman Smith is an attorney licensed to practice in California and South Africa. He is a fellow of the Wexner Heritage Foundation, serves on the National Board of the Friends of the IDF and is the founder and past Chairman of the San Diego and Orange County Chapters of the Friends of the IDF. Mr. Smith previously made Aliyah joining his daughter, Danielle, who served in the IDF as a Lone Soldier 14 years ago, his son-in-law and grandchildren.