A man walks into a nightclub. The man has been invited to see the stand-up routine of a well-known, slightly past-his-prime comedian. Sitting down for the performance the man expects an evening of comedy, jokes, one-liners, humorous anecdotes about the comedian’s life. That is not what he gets.

In A Horse Walks into a Bar by David Grossman (Jonathan Cape, November 2016), we meet Dovaleh Greenstein as he stands on stage to entertain a mixed audience typical for an Israeli nightclub – couples, soldiers, people out for an evening’s entertainment. At a table in the back is the story’s narrator, Avishai Lazar, a retired judge who knew Dovaleh as a boy. Avishai has since forgotten their childhood experiences and wonders why Dovaleh has invited him to the club.

Dovaleh’s monologue begins. He tells a few jokes but the audience’s response is mostly forced laughter. The jokes just aren’t funny and they’re mixed with personal stories which are hardly amusing. The comedian is far from being comedic. His tales become painful to hear. The audience gets restless; some people stand up to leave the club.

In the back, Avishai starts to remember, starts to understand. He realizes how little he really knew about Dovaleh as a boy and how little he knows about him as a man. Like those at the other tables, Avishai is ready to walk out of the club, but he finds himself glued to his seat. The crowd thins but Avishai remains, listening attentively as if he were still on the bench judging the comedian based on this stand-up testimony. 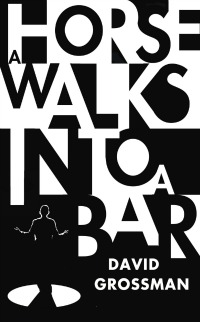 The performance – why won’t it end already? Luckily the novel is short. It reads like a poorly presented joke with a punchline that never comes. At times it seems as if the comedian on stage is daring for his audience to leave, for his readers to put down the book.

What keeps us glued to the page? Is it the reputation of a highly respected Israeli author, now on the shortlist for the Man Booker International Prize? Is it the excellent, flowing translation of Jessica Cohen? Is it the fact that the book is full of Israelisms, humor that only Israelis will fully appreciate? Perhaps we just feel sorry for Dovaleh and don’t want to leave him alone for a minute.

Is this book enjoyable? Not really. Is it worth reading? That will depend on you. Not every member in the audience stays to the end of the performance and many readers won’t reach the book’s conclusion. It is not exactly clear why the very talented Grossman was nominated for the Man Booker prize with this particular novel. The book has received glowing reviews from the critics but many readers will walk away disappointed. I, too, expected something more from this author.

David Grossman is an acclaimed Israeli author of fiction, nonfiction, and children’s literature. His works have been translated into more than forty languages. He is the recipient of many prizes including Israel’s Sapir Prize, the French Chevalier de l’Ordre des Arts et des Lettres, the Buxtehuder Bulle in Germany, and Rome’s Premio per la Pace e l’Azione Umanitaria.