Walking through Jaffa Gate you probably pay little attention to the merchants hawking olive wood crucifixes or to the man squeezing fresh pomegranates. You barely notice the women hanging laundry from their balconies in the Jewish Quarter and you take for granted the presence of the vigilant Border Guards. None of this matters as you gravitate toward Jerusalem’s main attractions — its holy places of worship. But what lies behind the green metal doors on the sides of the narrow alleyways?

Those doors are opened for us in Jerusalem, Drawn and Quartered by Sarah Tuttle-Singer (Skyhorse Publishing, May 8, 2018), an exploration of both the spiritual and the terrestrial aspects of the Old City. The book introduces us to the Armenians, Christians, Jews, and Muslims who live within its walls.

We join author and journalist Tuttle-Singer as she embarks “on a strange and wonderful adventure where [she is] actually living in Jerusalem’s Old City — a year of living as an insider-outsider, a visitor looking for community, but never really growing roots.”

Claimed by Israelis and Palestinians alike, this small area of terra sancta is frequently the focus of religious friction, of riots and stabbings. “Maybe it’s a little crazy to live for a year in the Old City during these days of great tension when the calm here dances like an angel on the head of a pin,” the author admits. “But I don’t mind being a little crazy. That’s part of what it means to be a journalist — you take yourself to the edge, close enough to look over and feel your heart stammer, but with enough sense to know when to back off.” 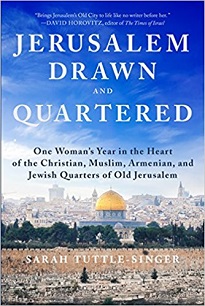 Through Tuttle-Singer’s eyes we see the Old City as we’ve never seen it before. We view the crowded quarters from atop its rooftops. We get an insider’s perspective on Jerusalem’s allure and mystique, something no tour guide or history book can provide. Tuttle-Singer’s writing is lyrical and poetic. It is a love letter to a fascinating city.

“I love Jerusalem best in the morning when she’s still naked, before the shops are open and the scarves and jewelry cover the stone. And I like to watch her wake up and get dressed while I drink my jasmine green tea from the balcony overlooking Jaffa Gate. Or earlier still, from the Western Wall, when sacred time meets sunrise, and Jews and Muslims pray together although separately behind their glass at the brink of sunrise.”

Jerusalem, Drawn and Quartered: One Woman’s Year in the Heart of the Christian, Muslim, Armenian, and Jewish Quarters of Old Jerusalem is much more than an ordinary travelogue. The author’s tale of her extended stay in the Old City is unabashedly frank and intimate. Not only does she detail encounters with Israelis and Palestinians, she also shares the trials and tribulations of establishing a new home in Israel for herself and her family. Thanks to this highly personal memoir we are better positioned to understand and appreciate the complexities and beauty of the Holy Land’s most coveted real estate.

Sarah Tuttle-Singer is a widely-read writer and the new media editor at Times of Israel. She is an LA expat currently growing roots in Israel, where she lives with her two children. She speaks internationally and recently received a prestigious ROI fellowship grant from the Schusterman Foundation.