The Ark of the Covenant, the sacred relic of the Israelites containing the tablets carved with the Ten Commandments, has been missing for 2,500 years. We don’t know if it was destroyed by Nebuchadnezzar of Babylon; carried off by Titus to Rome; or brought to Ethiopia by the son of Solomon and the Queen of Sheba.

Perhaps the Ark was hidden before the Babylonian invasion and is buried somewhere below the Temple Mount? This possibility has fascinated countless biblical scholars and archaeologists, but, spoiler alert, the Ark is still missing.

Raiders of the Hidden Ark by Graham Addison (Edgcumbe Press, August 2021) tells the largely unknown story of the Parker Expedition, a group of British aristocrats and army officers that carried out excavations in Jerusalem searching for Temple treasures between 1909 and 1911.

In this exhaustively researched work, we meet Montagu Brownlow Parker, 5th Earl of Morley, who, encouraged by the writings and explorations of other Christians, wanted to prove doubters of the Bible wrong and more importantly to bring about the End of Days. To organize his expedition, Parker enlisted “men similar to himself; young upper-class Englishmen connected by social background, school, military service and combat in the Boer War.”

But the group was motivated as much by business considerations. They bought shares in a syndicate that would benefit from the sale of any treasures discovered. 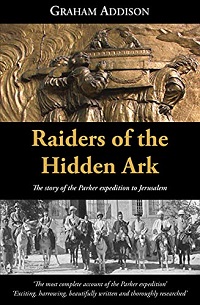 The author provides detailed backgrounds of the expedition members, but this slows down the narrative. Mentions of how novelist Joseph Conrad described steamships in the Congo; Second Boer War battles in South Africa; and an attempted assassination of Queen Victoria; may give readers a better understanding of the personalities involved, but they do not contribute to one’s understanding of the actual excavations in Jerusalem

The story of the archaeological dig, of the team’s exploration of the tunnels, shafts, and suspected hiding places of the treasures, only begins some 100 pages into the book. Cyphers in Biblical texts suggested that “the Ark of the Covenant could be found by working through underground passages from Gihon, which would lead … to the mosque.”

Parker and his band retrace the steps and digs of previous explorers and set off in new directions underground the city. Their work, approved by the Ottoman authorities but a thorn in the side for Palestinians whose homes were above the tunnels, failed to bring them the riches they sought. Instead, their story is just a historical footnote to the many archaeological digs conducted over the years in Jerusalem.

The expedition’s story, which sounds stranger than fiction, was ultimately unsuccessful but may have served as inspiration for later archaeologists and for the creators of action-adventure film “Raiders of the Lost Ark.” The mystery of the Ark of the Covenant’s location, as highlighted in this thoroughly researched book, will no doubt captivate future explorers as well.

Graham Addison worked for many years in the Human Resources department of firms developing mobile communications, Lotus 1-2-3 spreadsheets, and search engines, and at Apple’s European headquarters. He also ran his own software company, but his first love has always been history. After reading Simon Sebag Montefiore’s Jerusalem: The Biography, he was captivated by a brief expedition to Jerusalem of young Eton-educated men searching for the Ark of the Covenant, an expedition he describes as a “crazy combination of Downton Abbey meets Indiana Jones meets Dan Brown.” Raiders of the Hidden Ark is his first book.