When we first meet British television producer Russell Woolfe, he is on his way to his father’s funeral. Sitting in synagogue “for the first time in 40 years [he feels] hatred in his heart.” Woolfe “hated the synagogue for its rigid complacency. He hated his fellow Jews for making him despise them. He hated himself for having exposed himself to this irritation. Most of all, he hated his father for dying.”

Yet, for Woolfe, there was no question about going to the synagogue to “perform his duty as the son and say the kaddish, the prayer for the dead.” And this despite the fact that he was estranged from a father who had renounced him for marrying a non-Jewish woman.

In the novel The Legacy by Melanie Phillips (Bombardier Books, April 2018), Woolfe’s antipathy for his religion and the history of his people plays a key role in the story. Yet a chance meeting with Joe Kuchinsky, a Polish Holocaust survivor, sets Woolfe on a path of self-reflection, one that will possibly result in a new outlook on Judaism. 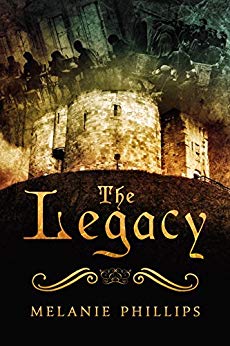 Kuchinsky presents Woolfe with an ancient manuscript that allegedly holds the key to the Jewish People’s survival and asks for assistance with its translation. Through the words of a medieval author by the name of Eliachim, Woolfe becomes captivated with the story of 12th century Jews living in York, England, and its hostile Christian environment. The challenge of translating this ancient text becomes exhilarating for him.

In parallel to following Eliachim’s fascinating history, Woolfe learns that Kuchinsky wasn’t completely honest when he assigned the translation task. This leads Woolfe to question how the manuscript came into Kuchinsky’s hands in the first place. Woolfe sets forth on a quest that takes him to Israel to meet with the second generation of Holocaust survivors.

The two tragic histories described in The Legacy—that of the Jews of York and the story of the Jews of Poland during the world war—make Woolfe wonder whether Jewish peoplehood is permitted in modern day Britain. This question is very pertinent today due to fears of rising antisemitism in the country.

In Woolfe’s reflections, at the narrative’s end, he must determine whether the hatred in his heart demonstrated in the novel’s opening pages can be replaced by acts of love, for both his father’s memory and “the ancient ancestry that [Woolfe] had so forcefully renounced.” As readers we come away with a growing sense that Woolfe will make the right choices how to deal with the legacy left to him by his ancestors.

Melanie Phillips is a British journalist, broadcaster and author. Her weekly column, which currently appears in The Times of London, has been published over the years in the Guardian, Observer, Sunday Times and Daily Mail. She is the author of Londonistan, the story of the British establishment’s capitulation to Islamist aggression, and The World Turned Upside Down: The Global Battle over God, Truth and Power.