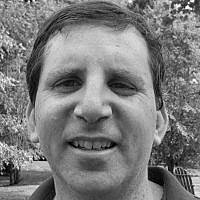 The Blogs
Bryan Schwartzman
Apply for a Blog
Please note that the posts on The Blogs are contributed by third parties. The opinions, facts and any media content in them are presented solely by the authors, and neither The Times of Israel nor its partners assume any responsibility for them. Please contact us in case of abuse. In case of abuse,
Report this post. 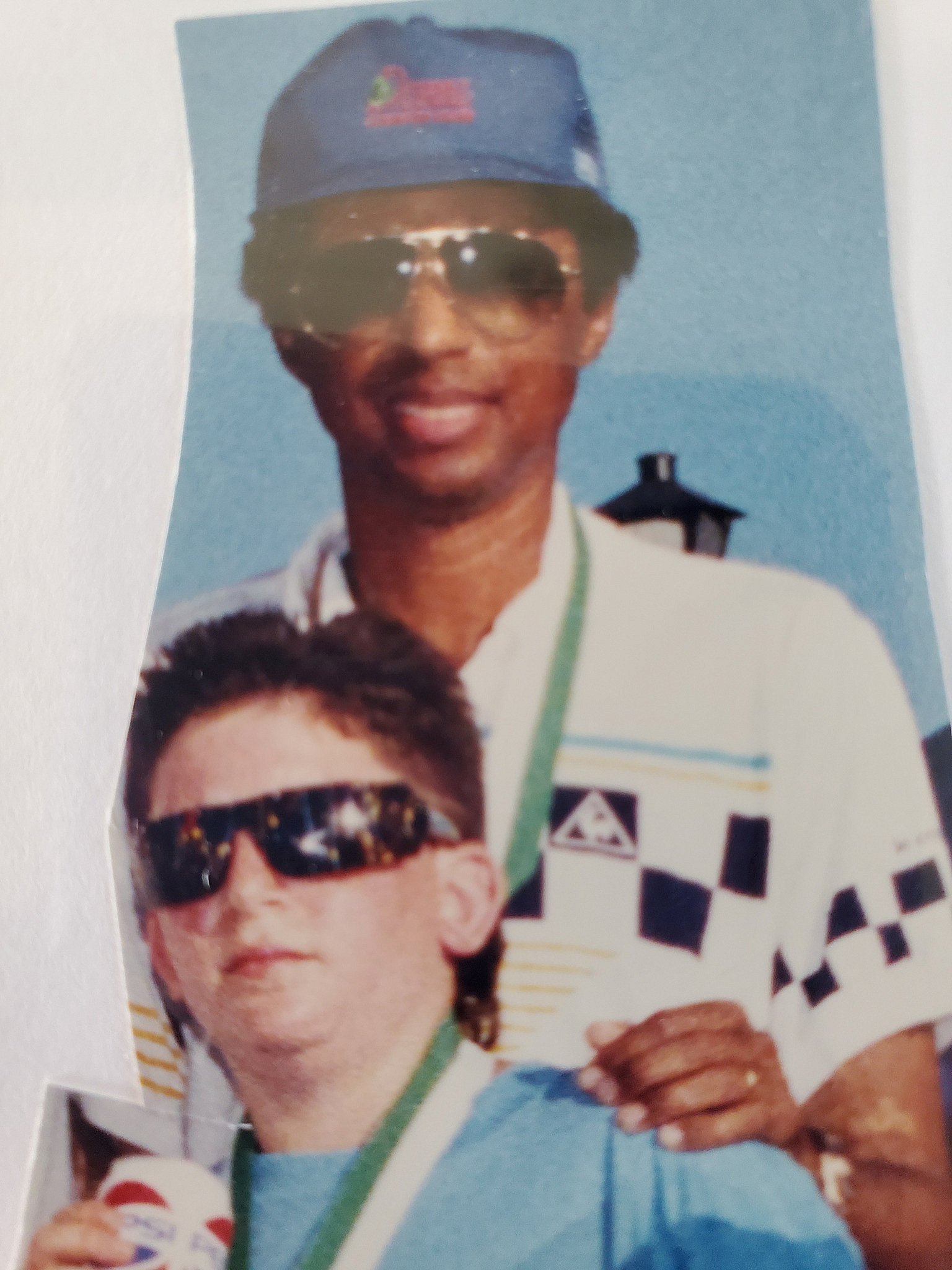 The author pictured with tennis great Arthur Ashe circa 1988 at the Doral Resort in Miami.

The photo is from ‘88 or ‘89. I recently came across it for the first time in years. I’m 11 or 12 years old, wearing ridiculous, paint-splotched sunglasses,  clutching a baseball mitt and displaying a Pepsi can like a fraternity brother holding a beer. My expression resembles that of a bemused rock star.  Placing his hand on my left shoulder is an adult with oversized sunglasses and an understated smile. Not one of my father’s softball buddies.

Do you understand who that is behind you? I want to scream at my younger self (and, in fact, do.) Turn around. Ask him a question. Or 100 questions. About his approach to spirituality. About how he bore life’s wounds with such courage. About how one becomes the kind of person that can change the world for the better. About how to be an effective citizen at a time when America feels like a failed state. About how, 27 years after his death, might we be able to save our republic from drowning.

Ashe, the global thinker, is the subject of a new, 700 page plus biography by Raymond Arsenault. ( He is also the subject of one of the best sportsbooks ever written, John McPhee’s Levels of the Game.) Here’s a version of his biography fit for Twitter: Child of segregation-era Richmond, grows up to become the first, and only, African American-male to win Wimbledon and be named United States Davis Cup Captain. Noted author, social activist, philanthropist, corporate leader and television personality. Suffers heart attack at the age of 36, contracts AIDS during a blood transfusion, becomes a leading AIDS activist and symbol of an engaged, responsible citizen. July 10 would have been his 77th birthday.

My New York family spent school vacations in South Florida, where, surprise, surprise, my Jewish grandparents lived. We’d visit our close family friend, Sam “Mr.T” Tolkoff, at the Doral Resort in Miami (in the days before it was owned by the current Oval Office occupant.) Mr. T.  a teacher and basketball coach, directed youth and sports activities over winter breaks. We never could have afforded to stay at this wealthy playground, but knowing Mr. T was more than enough to get us onto the grounds.  Ashe, who’d owned a home at the Doral, directed tennis operations there. The two men, one an African American celebrity, the other a Jewish teacher and coach, worked together for some 15 years and developed an enduring friendship.

I had the once in a lifetime chance to take part in an Ashe serving clinic. He spent a few minutes breaking down my biomechanics.  To this day, his was the smoothest delivery I have ever witnessed, an exhibition of human kinetic art. My serve, never approached beauty. The last time I saw him was in Dec. 1991, the fact he was living with AIDS still a closely-guarded secret. Still, even an unworldly boy could see unnatural thinness and had a sense something wasn’t right.

Mr. T died in March at the age of 93, COVID-19 the likely cause. Not long after, I recalled that Ashe’s final, deathbed memoir, Days of Grace, sat on my bookshelf, unread since it was first published in 1993, while I was in high school.  Something told me that if I returned to its pages, it would bring me closer to Mr. T, that it had a role to play in the grieving process.

Then, events suddenly made rereading Ashe more than a personal act, but an essential social and political undertaking. The murder of George Flloyd. The mass protest movement bringing the nation’s attention to racial justice. The spate of public incidents bringing renewed attention to the history of alliance and enmity between African Americans and white Jews.

And, incredibly and belatedly, as confederate monuments have been removed from public spaces across the country and, most surprisingly, in Richmond, capital of the old Confederacy. Ashe’s likeness is one of just two statues remaining along Richmond’s Monument Avenue. If and when the formerly sacrosanct Robert E. Lee falls, Ashe’s statue will stand alone, overlooking the city that once dictated where he could play tennis, drink water, sit on the bus. Fittingly, the stone figure of Ashe holds a book higher than a tennis racquet.

In Days of Grace, the reader encounters a deep, multifaceted, sometimes iconoclastic thinker whose wide-ranging perspectives on race and healthcare shouldn’t be lost to history. In fact, I’d argue that policy-makers and citizens of all backgrounds would gain added perspective from consulting this insightful and heartfelt volume originally published in 1993.

Now, fair warning, in some ways, his thinking comes across as eerily contemporary and, at other points, seems just plain out of sync with our times. Reading today, its almost cringeworthy how he spills vast amounts of ink assuring readers he didn’t contract AIDS from homosexual intercourse or assume that if his daughter, Camera, gets married one day, it will be to a man. This says more about how much social attitudes have evolved in 30 years than about Ashe’s shortcomings (for all human beings have shortcomings.) And, for someone who once considered running for Congress as a Democrat, he shows some conservative tendencies, from his strident opposition to affirmative action to his 1988 vote for George W. Bush. (In 1992 he publicly supported Bill Clinton.) He was a far more independent thinker than a party man.

This was a man who was constantly continually evolving. Two quotes from the memoir stood out to me as particularly poignant for 2020.

The first comes in perhaps the book’s most startling, and most illuminating moment. In his chapter “The Burden of Race,”  Ashe recalls a moment when a stranger asked him if living with AIDS was the most difficult burden of his life.

“You’re not going to believe this, but being black is the heaviest burden I have ever had to bear.”

This phrase speaks volumes. At a time when AIDS meant a death sentence, how could anything be worse? To have one’s life be dictated by doctors’ appointments and pills, to equate pain with everyday reality, to constantly struggle and hope for strength to make it through the day, to live with the knowledge that sooner or later, your young daughter will lose her father, seems about the most difficult reality anyone could face. Yet for Ashe, who’d known so much success and wealth, and who wasn’t given to speaking in hyperbole, nothing weighed on more heavily than being born a black man in America.

“I am an optimist, not a pessimist. Still, a pall of sadness hangs over my life and the lives of almost all African Americans because of what we as a people have experienced historically in America, and what we as individuals experience each and every day. Whether one is a welfare recipient trapped in some blighted “housing project” in the inner city or a former Wimbledon champion who is easily recognized on the streets and whose home is a luxurious apartment in one of the wealthiest districts of Manhattan, the sadness is still there.”

In his writing, Ashe peered back his genteel exterior to reveal a searing rage at injustice. As  Arsenault quotes in his biography, Ashe famously said: “I hate injustice much more than I love decorum.”

Yet Ashe knew as well as anybody that meaningful change doesn’t come from moral outrage alone. “After all,” he wrote, “I am not one to bank and stoke rage; instead I want its fire to go out as soon as possible and cool reason to return.”

Yes, this is about how he carried himself personally but it also reflects his political self and the value he placed on nuanced debate, careful consideration of consequences, long-term-planning. These are the bedrocks of the American experiment. I’m far from the first to suggest that we need them now more than ever. It’s no surprise that we’ve all collectively lost our minds: The economy is beleaguered, a deadly pandemic remains out of control, and the president of the United States has largely abandoned leadership during the worst national crisis in decades. The left and the right each share some blame for our civic breakdown. Perhaps, once we have a new president, and have the virus under control, we rediscover “cool reason.” I fear we can’t wait that long.

What I infer from Days of Grace, and what might help us today, is the idea that he held righteous indignation on the one hand, and careful reasoning, nuance, debate and planning on the other.

I can also imagine that like former President Barack Obama during his essential eulogy of John Lewis, Ashe would have reminded us of our commonalities, our shared destiny as citizens of the world. Could he speak to us today, I believe he would remind African Americans and American Jews (especially Jews of white, Azekanazi backgrounds), that, while our respective communities may have been forged by dramatically different narratives, each group tends to benefit during periods of social progress. For reasons of self-interest, and because it is right and just, he would have urged African Americans and Jewish communities to rediscover common ground and play integral roles in the process of healing our nation.

As a father, a citizen and writer, I’m bombarded with options and noise. When my children ask about the future, there are very few questions I can answer honestly and confidently. The way forward isn’t at all clear to me. It may be too much to hope that the words of this long-departed soul – one to which my connection is more claimed than real – might provide some clarity today. Yet, I have chosen to interpret one voice from the past. That’s part of the point of the moment: individually and collectively, we get to choose which lives we emulate, which voices we celebrate. The more voices we celebrate, the more of our past we remember, the closer to “we the people” the United States, and the nations of the world, become. And a world that celebrates Ashe’s humanity is a slightly more perfect one.

About the Author
Bryan Schwartzman is an award-winning journalist turned Jewish nonprofit professional living with his family in suburban Philadelphia. His fiction has been nominated for the Pushcart Prize.
Comments