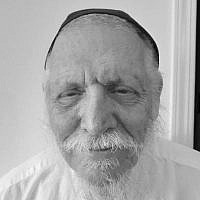 The Blogs
Sholom Morgan
Apply for a Blog
Please note that the posts on The Blogs are contributed by third parties. The opinions, facts and any media content in them are presented solely by the authors, and neither The Times of Israel nor its partners assume any responsibility for them. Please contact us in case of abuse. In case of abuse,
Report this post.

How Jews receive rewards and punishments

You are exposed on a near-daily basis to news about the proliferation of evil and cruelty. You are also exposed to deeds of heroism and kindness. Are there rewards and punishments in Judaism?

The concept of rewards for the righteous and punishment for the wicked is central to Judaism. On a personal level, Jews who observe the mitzvot (Biblical commandments) written in the Torah (Jewish Bible) by the perfect God will be rewarded while those who transgress them will be punished.  Of the 613 mitzvot in the Torah, 369 are applicable today. The others can only be performed when there is a functioning bait hamikdash (Temple).
On a national level, many passages in the Torah stress that if the Jews of Israel study the Torah and perform mitzvot, many rewards await them such as abundant crops and material prosperity. Other nations will respect and do business with the Jews. However, if the Jews do not study the Torah and perform mitzvot, they will be exiled from the Land of Israel and scattered all over the world. Unfortunately, this is precisely what occurred nearly 2,000 years ago when the bait hamikdash was destroyed, and the Jews were exiled from their God-given land and forced to reside in other countries. Although some Jews have returned to their ancient ancestral homeland, it lacks the same spirituality that prevailed in ancient times. Thus, officially at least, Jews are still in exile

How gentiles receive rewards and punishments

Gentiles are also subject to rewards and punishments. They must uphold the “Seven Commandments of the Descendants of Noah” to earn their reward. These are seven universal moral laws necessary for the preservation of any society. You’ll learn them below. Gentile individuals and countries that fulfill these  mitzvot  are guaranteed to be rewarded. Those who don’t are guaranteed to be punished.

The rationale behind rewards and punishments
It is counterintuitive. If there is no reward for performing the mitzvot by Jews
and gentiles, and there is no punishment for Jews and gentiles who violate themt, what incentive is there to perform them? People who do not perform them would be praised for “doing the right thing” while those who do would look like fools! Societies would be completely chaotic. Obviously, then, since the perfect God has commanded people to observe the mitzvot, rewards for those who do them and punishments for those who don’t must follow.

Olam ha-ba: the World to Come
The Hebrew term olam ha-ba means “the World to Come.” It has a dual meaning. One is the destination of souls in the afterlife after one’s passing. The other is what will happen to people in the era of the ma-shi-ach, the Jewish messiah.  We will focus on the former definition.

Referring to the afterlife, the Talmud states, “The world is like a lobby before olam
ha-ba. Prepare yourself in the lobby so you can enter the banquet hall!”

Only the very righteous go directly to Gan Aiden, the Garden of Eden, which in the time of Adam and Eve – the first two humans on earth — was the best part of the entire earth. In Chapter 2 of the Book of Genesis, God placed them in a garden that He planted. “And from the ground made the Lord God to grow every tree that is pleasant to the sight, and good for food; the Tree of Life also in the midst of the Garden (of Aiden), and the Tree of Knowledge of Good and Evil.” Gan Aiden was a delightful garden where Adam and Eve were very happy. It had shining gemstones and perfect weather. In it was a river which branched out into four smaller rivers, watering the crops. Adam did not have to exert himself to grow food, for as long as he studied and practiced six mitzvot that God taught him, the produce grew by itself. It was, indeed, “paradise.” The six mitzvot are (1) not to pray to idols; (2) not to curse God; (3) not to murder; (4) not to commit adultery, bestiality or sexual immorality, including homosexuality; (5) not to rob; and (6) to establish courts of justice. A seventh mitzva, the prohibition of tearing the limb from a living animal and consuming it, was added later in the era of Noah.

Adam was free to eat from any tree in Gan Aiden except from the Tree of Knowledge of Good and Evil. In chapter 3 of the Book of Genesis, Eve was seduced by the snake into eating the forbidden fruit. She, in turn, seduced Adam who also ate from it. Among their punishments was expulsion from Gan Aiden to prevent them from eating from the Tree of Life. If Adam had eaten from it, he and his descendants would live forever. For various reasons,God did not want this. You can see that Adam’s sin caused the death and destruction we witness every day.

The destination of the souls of the righteous and the wicked

Upon death, the average person descends to a place of punishment and/or purification, generally referred to as Gehinnom, Hell. There are differing opinions among rabbis as to what occurs there. According to one view, every sin a person commits creates an angel of destruction (a demon), and after death the person is punished by the very demons that he created. Another view sees Gehinnom as one of severe punishment, much worse than any mortal could suffer on earth. Jewish sources reveal other views as well. According to all views, the period of time in Gehinnom does not exceed 12 months, and then the average person’s soul ascends to take its place in Olam Ha-Ba.

The eternal destination for righteous Jews is Gan Aiden. The Talmud characterizes it as a place of great joy, peace, the enjoyment of lavish banquets, and celebrating Shabbat, the Jewish Sabbath. One Talmudic rabbi, Rav, asserts that “there is neither eating nor drinking; no procreation or business transactions; no envy, hatred or rivalry; but (the righteous) sitting enthroned, their crowns on their heads, enjoying the Divine Presence.” Ramban (Maimonides) writes that “there is nothing material. There are only the souls of the righteous without bodies, like the ministering angels.” The righteous, he adds, attain a knowledge and realization of truth about God that they did not attain while on earth. It is eternal paradise.
By contrast, the punishment for wicked Jews and gentiles is Gehinom. Their souls go down to Gehinom and are punished there for 12 months. The punishments are more severe than any mortal being could endure on earth. After 12 months their body is consumed, their soul is burned and the wind scatters them under the soles of the feet of the righteous. Another opinion is that the soul continues to exist in a state of consciousness of remorse, a very unpleasant state.

When does God dispense the rewards and punishments?

A righteous Jew may not receive his rewards — and the wicked their punishments — in this world. God may decide to dispense them in Olam Ha-ba, God is just and fair. No righteous individual has ever – or will ever – be deprived of his reward. And no wicked person has ever – or will ever – escape without punishment. It’s a fundamental belief in Judaism that no good deed goes unrewarded and no sin goes unpunished. No one can hide from God Who sees, hears and records all our actions. Each individual is responsible for his/her own behavior.
If you actually believe that brutal, despotic, bloodthirsty, despotic dictators past and present such as Putin (Russia), Hitler (Germany), Khomeni and Khameini (Iran), Xi Jinping (China), Castro (Cuba), Kim (North Korea), Maduro (Venezuela), Arafat and Abbas (Palestinian Authority), Assad (Syria), most Muslim leaders and other corrupt, dictators will revel in Gan Aiden upon their demise, you should definitely think again. Because they are deliberately disregarding the “Seven Laws of the Descendants of Noah,” the punishments that await them are much more severe than any they could endure during their lifetimes or that they have inflicted on their innocent victims. It’s a shame they lack the foresight to realize it.

Adapted from Have You been Jewish Today? Adult Edition by Sholom Morgan

About the Author
Sholom Morgan and his wife have recently retired after being a rebbe (Jewish studies teacher) for over 50 years. During that time, he taught thousands of students of all ages, from pre-school children up to and including adults
Comments