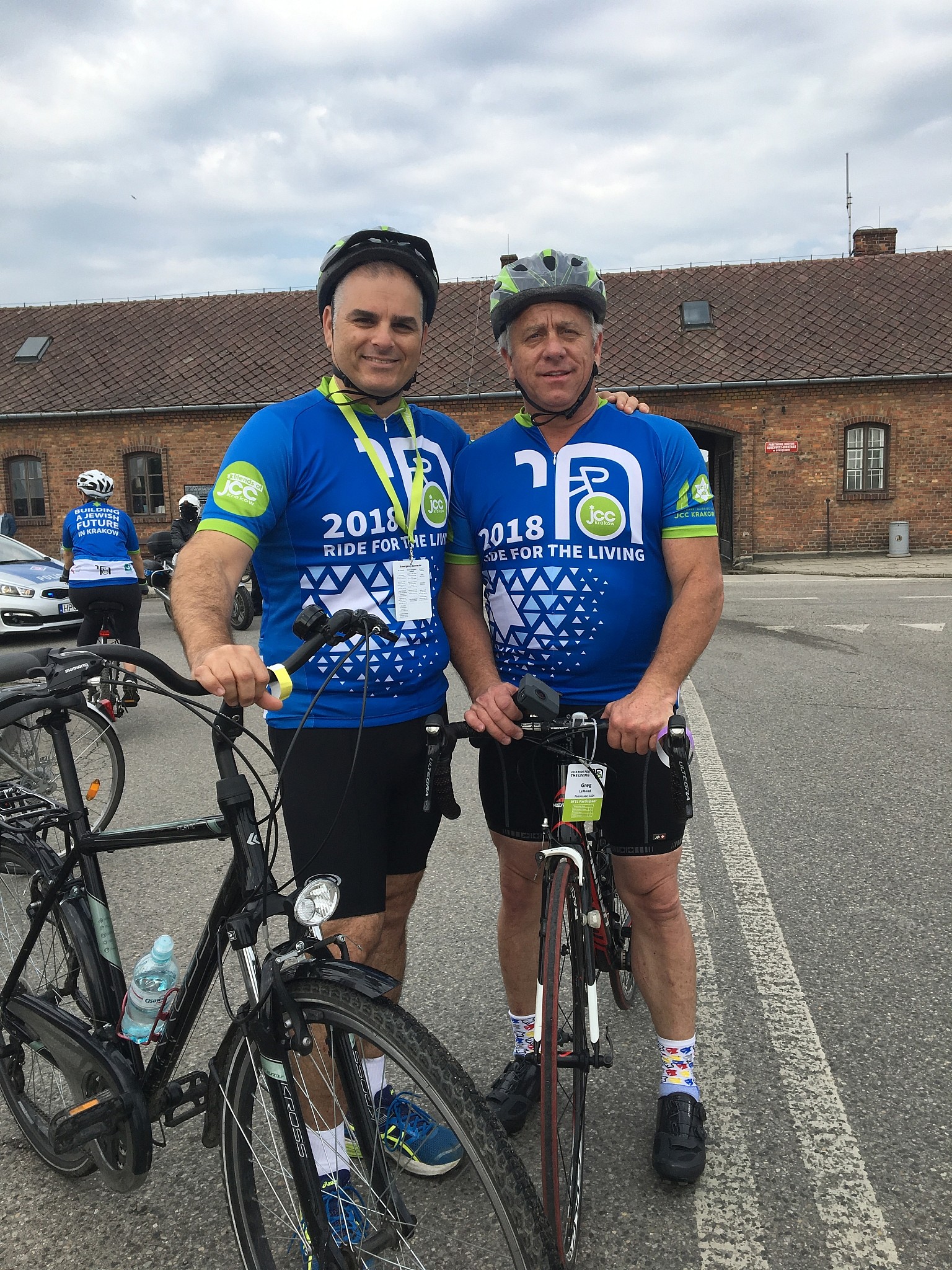 Greg and me in front of the gates of Birkenau about to begin the Ride. Photo credits: Jakub Włodek, Katarzyna Bednarczyk

Did you ever wonder what it would be like to have a pick-up basketball game with the greatest basketball player of all time, Michael Jordan? Or perhaps to have a jam session with Elvis? Shmoozing about science and space with Einstein… Few have the opportunity to meet and engage with the people who have risen to the greatest level in their fields. We generally think these people are larger than life, elite in action and in stature and often removed from reality. My recent experience proved the opposite conclusion. 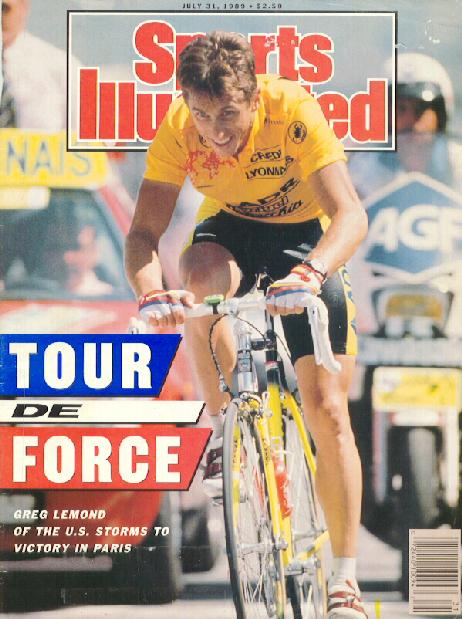 I had the rare privilege of riding 60 miles together with one of the greatest cyclists in the world, Greg LeMond. Three time winner of the Tour de France and two time winner of UCI Road World Championship, he truly embodies the spirit of a champion. My experience with him was  revelatory in the sense that this giant on the road was also a wonderful human being, very down to earth and quite inquisitive about this unique bike ride that he would admit is the most meaningful one he had ever ridden—the Ride for the Living. 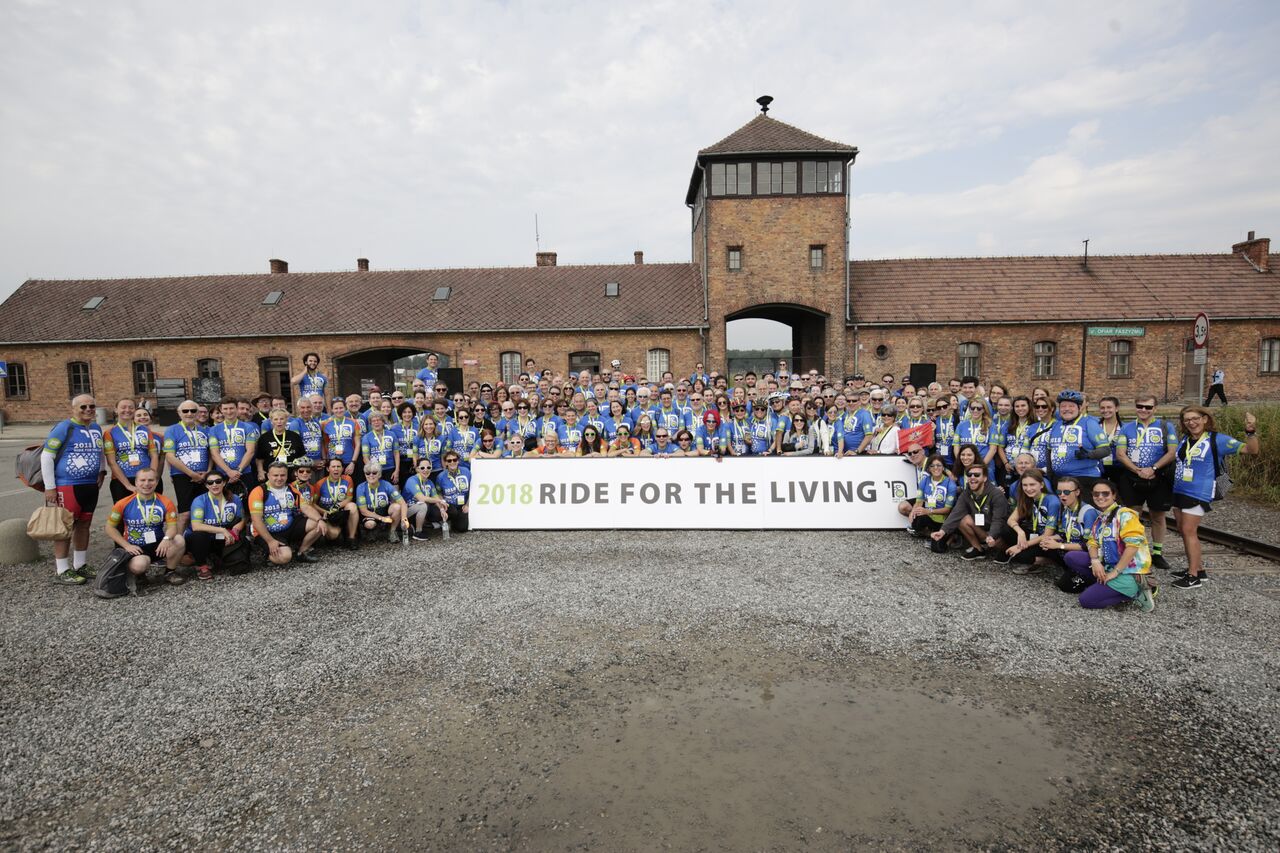 Greg is not Jewish and had no previous connection to the Jewish community of Poland, nor with the story of the revival of Jewish life in Krakow, an hour’s ride from Auschwitz. He found out about the ride from his good Jewish friend Jonathan Cooper who met the director of the Jewish Community Centre in Krakow, Jonathan Ornstein, at an airport and they immediately connected. When Cooper heard about a bike ride from Auschwitz/Birkenau, the darkest place on earth, to the JCC in Krakow, a place of light and hope, he told Greg he had to come.

Cooper understood right away about the significance of the Ride for the Living. The over 200 riders in its fifth year raise funds for Jewish life in Krakow and awareness about the fact that in Poland, still today, 75 years after the Holocaust, Jews cling to their faith and continue to build a Jewish future. Child survivors after the first year were brought to Israel, some for the first time in their lives, and they continue to be direct beneficiaries of the generosity of all those who support them during this ride. 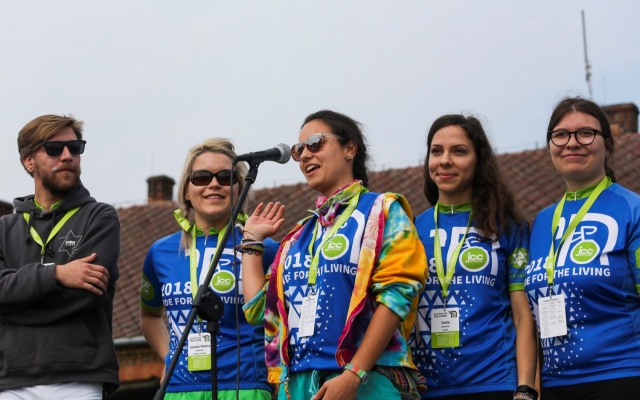 In addition, Krakow has witnessed a renaissance of Jewish identity. Young Polish students have started finding the true nature of their roots—grandma was actually Jewish and nobody told them…Instead of ignoring this revelation many have joined the membership of the JCC and engaged in Jewish life for the first time. 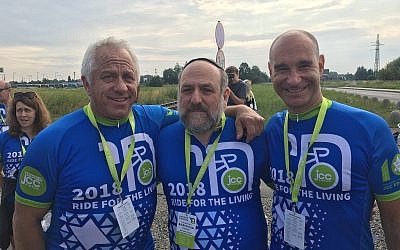 Greg LeMond, the most successful American bicycle rider ever and one of the best in the world, knows about riding–60 miles he can ride in his sleep! But he has never experienced a ride which is so linked to the tragic and then inspiring story of a people rising up against all odds and fighting to survive and even thrive. The emotional component to this ride was unparalleled. This is especially true because the day before the ride we visited Auschwitz/Birkenau together with his wife Kathy and another 160 guests who arrived for this special event. 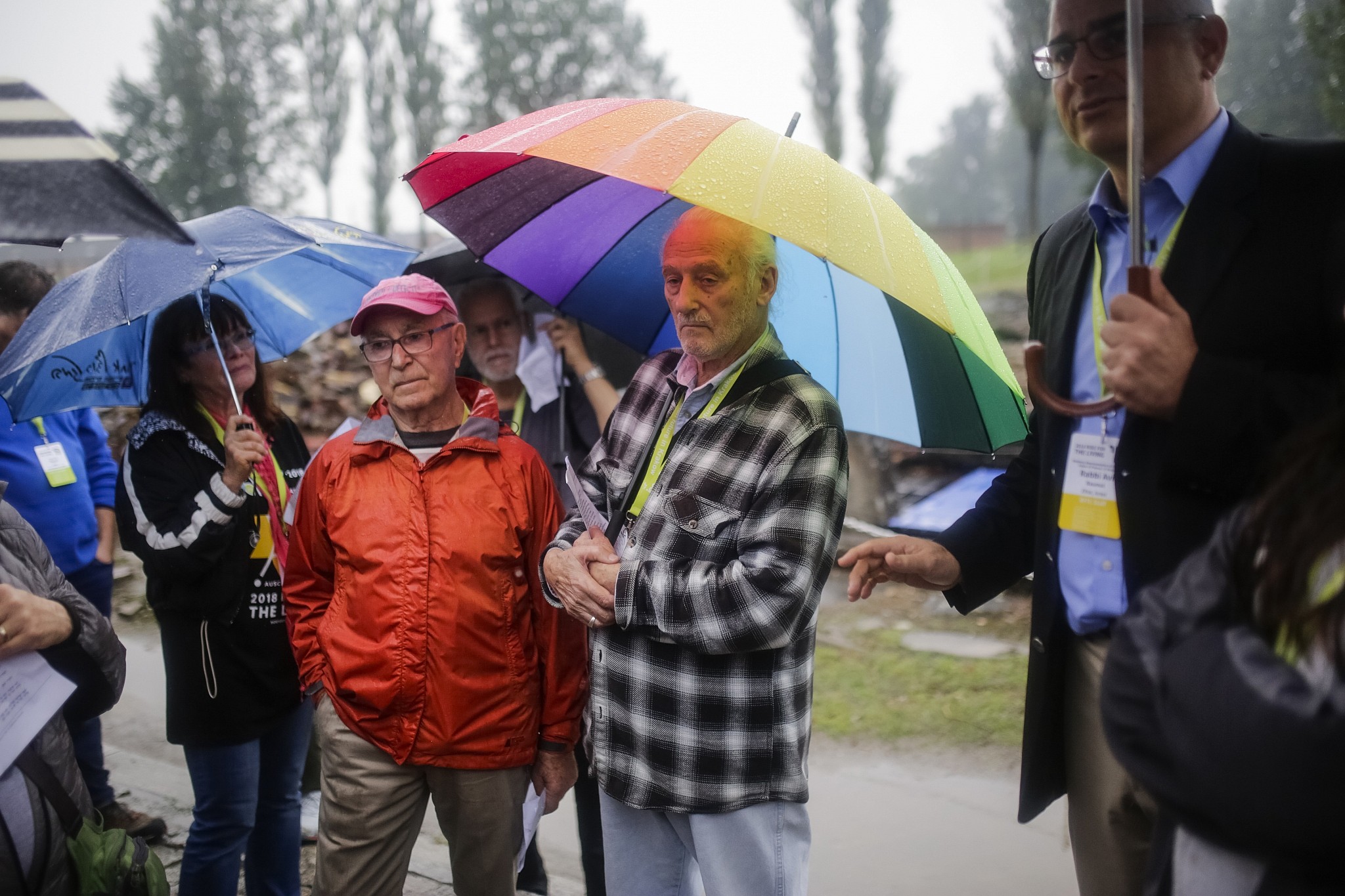 Marcel and Bernard, Birkenau survivors stand by my side for the memorial. Photo credits: Jakub Włodek, Katarzyna Bednarczyk

I have visited many times, as a Jew, a rabbi, a guide and a (third generation) survivor. But watching Greg and his wife experience the worst that the world has seen in centuries was truly emotional. Walking back from the crematorium in the pouring rain, after a powerful prayer service with two survivors of Birkenau (Marcel Zielinski and Bernard Offen), Greg was visibly moved. It is one thing for Jews to be shaken by the harrowing sights where their relatives were murdered, but for others to feel our pain on such a personal level is a testament to Greg’s empathy. In Greg’s words:

‘I never thought I could go and see Auschwitz, you see movies and you go: “I don’t know if I want to go there” but to be here with a group of people who were actually survivors, it’s a different deal and you get to see what it was…one rider here – his father’s whole    first family perished and he’s here trying to make sense of what happened so it’s good [to come and experience it].’

Greg felt so strong about this moving experience that he has started planning on coming back to join us next year along with his children. 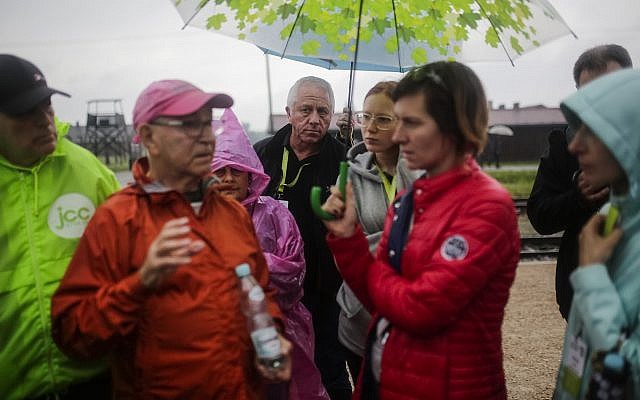 The day of the ride, at the podium, Greg spoke about the overwhelming emotions he felt and the privilege it was for him to be at this event despite other rides and other moving events in which he had participated in the past. He recalled the feelings of standing the day before at the crematorium in Birkenau, next to two heroic people—Marcel Zielinski and Bernard Offen—who eerily remembered standing there over 70 years before, when the doctor of death casually waved his hand to the right, which meant life for him, but to the left for his father. There was not a dry eye in the audience. And to have these two individuals, amongst the over 200, starting their journey from Birkenau to the JCC in Krakow, back to a Jewish future—it was truly an inspiring moment for all. 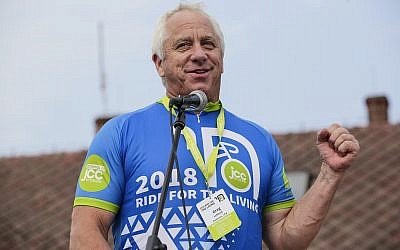 Greg at the Podium in front of the gates of Birkenau. Photo credits: Jakub Włodek, Katarzyna Bednarczyk

I spoke about this not being a ‘ride’ but more like a journey, not unlike the journey of Moses and the Israelites in the desert. For forty years wandering in the desert Moses had two seemingly contradictory roles. On the one hand he needed to bury the past, the first generation who would tragically die in the desert. He needed to preserve their memory, to treat them with great respect and to commiserate with their plight of not surviving and reaching the Promised Land. At the exact same time he was busy with preserving the past, he was charged with inspiring the future, the second generation. He would inspire the future leaders of those who would enter the land and merit the divine light. Moses needed to engage in both generations, preserving the past and inspiring the future. 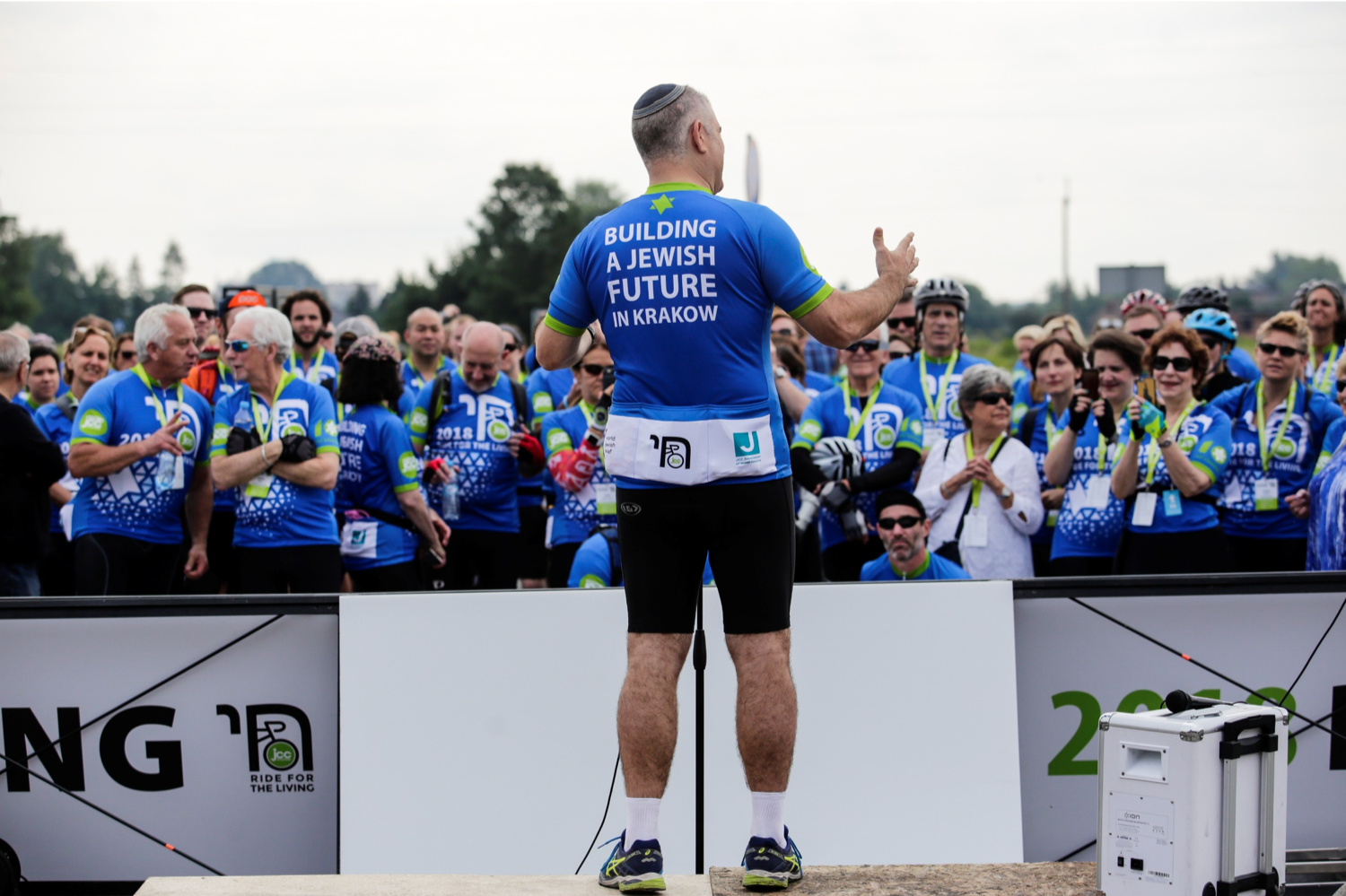 I believe that all those who work in Poland to preserve the memory of the millions of Jews who lived there while at the same time build a Jewish future for those who survived and those who reconnect to Jewish life—they possess the tradition of Moses. Moreover, all those who support the activities of the Jewish community in Poland and the JCC in particular acquire an element of the Moses personality. 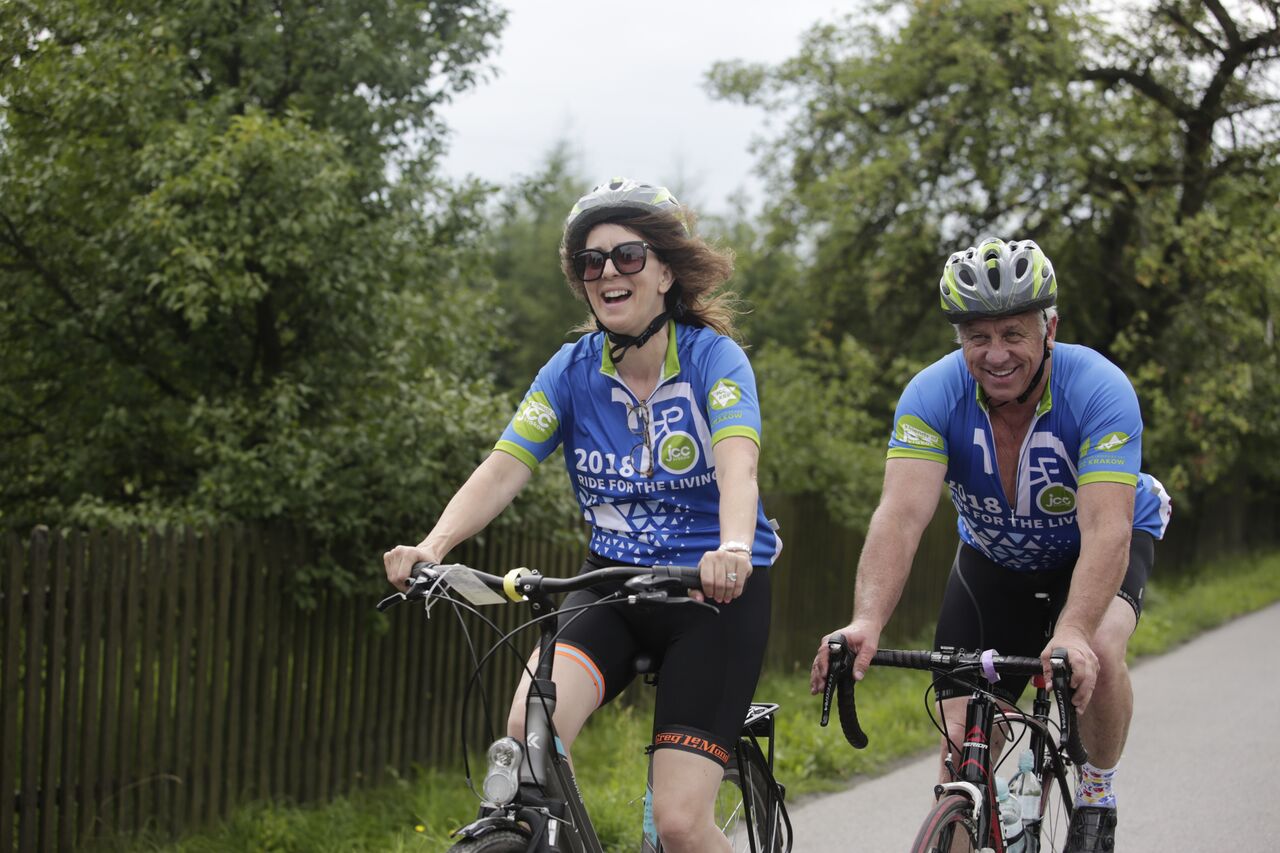 In this regard we do not focus on Jews alone. Greg and Kathy LeMond, by coming to Poland, learning about the tragic history of the Jews of the 20th century but then supporting the rebirth of Jewish life in the 21st century, they too, become part of the team Moses. And they will continue to be on our team as they become ambassadors of the message of rebuilding Jewish life in Krakow. In addition to earning world-wide respect for his excellence in cycling, Greg has touched the heart of the Jewish community of Poland and we are truly indebted to him for his involvement. 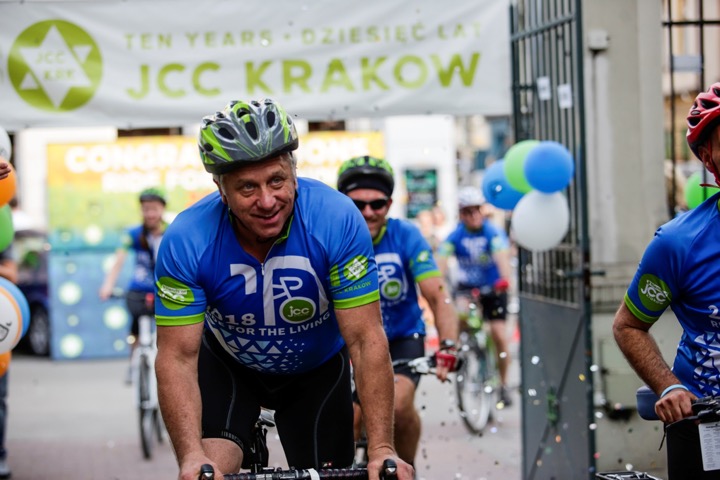 Greg LeMond finishing the Ride at JCC Krakow. Photo credits: Jakub Włodek, Katarzyna Bednarczyk
About the Author
Rabbi Avi Baumol is serving the Jewish community of Krakow as it undergoes a revitalization as part of a resurgence of Jewish awareness in Poland. He graduated Yeshiva University and Bernard Revel Graduate School with an MA in Medieval JH. He is a musmach of RIETS and studied at Yeshivat Har Etzion in Alon Shevut. He served as a rabbi in Vancouver British Columbia for five years. Rabbi Baumol is the author of "The Poetry of Prayer" Gefen Publishing, 2010, and author of "Komentarz to Tory" (Polish), a Modern Orthodox Commentary on the Torah. He also co-authored a book on Torah with his daughter, Techelet called 'Torat Bitecha'. As well, he is the Editor of the book of Psalms for The Israel Bible--https://theisraelbible.com/bible/psalms. In summer 2019 Rabbi Baumol published "In My Grandfather's Footsteps: A Rabbi's Notes from the Frontlines of Poland's Jewish Revival".
Comments