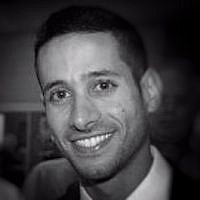 The Blogs
Tsach Saar
Apply for a Blog
Advertisement
Please note that the posts on The Blogs are contributed by third parties. The opinions, facts and any media content in them are presented solely by the authors, and neither The Times of Israel nor its partners assume any responsibility for them. Please contact us in case of abuse. In case of abuse,
Report this post.

In preparation for the Wannsee Conference in 1942 Adolf Eichmann, the head of the Jewish department of the SS, was asked to make a list of the number of Jews in each and every European country. While the decision on the Final Solution – the extermination of the Jews of Europe – had already been made, the conference members still had to discuss a plan of action. One of the countries on Eichmann’s list was Albania, and next to it stood a number. At that time, according to the records of the Reich, two hundred Jews lived in Albania. After the war, however, there were about two thousand Jews, ten times more. Albania, a small Southeastern European republic with a predominantly Muslim population, thus became the only country in Europe where the number of Jews after World War II was higher than before the war.

During the war, under Nazi and Italian occupations, the Albanian population protected the Jews. In 1944, the Nazis ordered all Jews living in the capital, Tirana, to register with the Gestapo, forcing them to flee to friendly villages outside the cities. Many found refuge with Albanian families and the partisans. Albanians not only hid the Jews but also provided them with local names, clothes and education and treated them as part of their family. When the Nazi authorities demanded that Albanian officials give them a list of Jewish families living in the country, the Albanians refused and instead warned the Jews and promised to protect them.

One of the principles that explains the willingness to protect the Jews is the Albanian code “BESA” which literally means “to keep a promise.” Because of this code, Jews who were taken in by Albanians families could have complete trust in them. To this day there are streets in cities like Berat and Vlora that are known as “the streets of the Jews,” recalling the days when Jewish families lived there in friendly and synergetic relations with their Albanian neighbors also after the war ended. In recognition of their heroic acts in saving Jews, “Yad Vashem” honored 70 Albanians as Righteous Among the Nations.

The Jewish community in Albania has its roots in the 15th century, when a large group of Jews arrived in the region following the expulsion from Spain. According to some historians, the first Jews settled in Albania during the first century of the Common Era, after being exiled from ancient Israel by the Romans, and their descendants are the ones who built the first synagogue in Saranda 400 years later. As in other areas near Albania, this community consisted of these Romaniotic Jews and Sephardic Jews who arrived in Albania from Spain.

In a census conducted in 1930 only 200 Jews were registered in Albania. In 1937 the Jewish community received official status from the government. With the rise of Nazism in Germany and Austria and throughout World War II, hundreds of Jews from those countries and other countries in the Balkans and Europe found refuge in Albania. After the war, as mentioned, about 2000 Jews were living in Albania. With the rise of the Communist regime, all religious activity was banned, in accordance with the doctrine of the atheistic state, and the several hundred Jews who lived in Albania were not allowed to leave as a result of the strict emigration laws. During the nineties the vast majority of Albanian Jews came to Israel. Only a few families stayed in Albania.

Today, Albania is a small developing country with a population of about three million people, of which around 70 percent are Muslims. Until the early nineties it was one of the most closed countries in the world under the dictatorial communist regime of Enver Hoxha. Since then, the country has been experiencing an ongoing process of democratization and rapprochement with the West which is conditional on Albania’s commitment to uncompromisingly fight corruption and organized crime. These efforts have borne fruit as Albania was admitted to NATO and obtained the status of a “candidate” country to join the EU. Islam in Albania is mostly moderate and secular, with roots in the 500-year-long Ottoman occupation that ended with the collapse of the empire and Albania’s declaration of independence in 1912.

The brave connection between the Jewish and the Albanian peoples continues today and grows even stronger. The Albanians were the first to condemn the kidnapping and murder of three boys in the West Bank (June 2014) and the horrible massacre (Nov 2014) in a Jerusalem synagogue. They stand in the forefront of countries supporting Israel in international forums such as the United Nations, Human Rights Council and UNESCO, and cooperate with us in a variety of fields, often under pressure and criticism from Arab and Muslim states. The State of Israel two years ago opened a resident embassy in Tirana, allocates funds and resources to assist and promote Albanian agriculture, encourages Israeli investors to explore Albania, delivers advanced technology in the fields of security and cyber, and sends experts in various fields to Albania to share Israeli knowledge.

Nowadays, the Albanians are putting a lot of effort into commemoration and perpetuation and have recently joined the International Holocaust Remembrance Alliance. On 27 January ceremonies and official events took place in Tirana at the Foreign Ministry, the Parliament and academic institutions, attended by the President of Albania, the Prime Minister and its cabinet and other senior officials. On this very day, when we commemorate the Holocaust, it is important that, also in Israel, stories of the heroic rescue of Jews by Albanians during World War II be told.