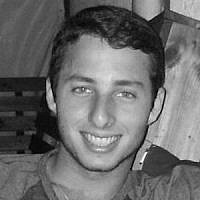 The Blogs
Eitan Moed
Apply for a Blog
Advertisement
Please note that the posts on The Blogs are contributed by third parties. The opinions, facts and any media content in them are presented solely by the authors, and neither The Times of Israel nor its partners assume any responsibility for them. Please contact us in case of abuse. In case of abuse,
Report this post.

At 5:17 AM IST this morning, Monday morning, darkness and silence filled the Israeli skies. Most were fast asleep like any other Monday morning, few starting to get up for work, and my dad preparing to go for a run. I was lying on my couch, 11:17 PM ET, watching the highlights and analysis of a wild March Madness weekend that saw UCF get as close as a fingertip from pulling off an unprecedented upset.

As the clock hits 11:18 PM ET my phone starts going wild, the Red Alert application goes berserk notifying that an air raid siren just went off in Israel. Quickly logging in I see that sirens went off in many of the towns north of Tel Aviv, very close to home. Now, so you understand, rockets in the southern district of Israel isn’t a new phenomenon, but here, slightly north of the center, it is not an everyday occurrence. I immediately called to make sure they woke up, and unsurprisingly they were all well awake after sprinting downstairs to the shelter. My parents shared with me that they just heard a loud boom in the distance. As we soon learned, that boom was the result of the rocket hitting a house about 12 kilometers away, hospitalizing 7 who were also running to their shelter.

What most are probably thinking is that Israel will defend itself, like it should. What we aren’t talking about is all the internal politics currently involved with elections around the corner. Benjamin Netanyahu and Benny Gantz, currently the most desired candidates running for Prime Minister, are both in America leaving the AIPAC conference early due to these current events. Gantz has been claiming that Netanyahu’s policies have failed the people of Israel, especially those in the south, being merciful towards a Hamas terrorist organization who has continuously shot rockets at houses in the southern district of Israel. If Netanyahu responds harshly towards Hamas, it will be translated as though Tel Aviv lives are more important than those who live in the south. If he doesn’t, he will be tolerating terrorism and empowering Hamas to do however they please. A choice with difficult consequences.

Gantz, on the other hand, is also on the radar. There is an unwritten rule in Israeli politics that politicians must put the security needs of the country before political points. With Gantz and Netanyahu both campaigning on security, each claiming that they are the best leader to protect Israel, along with this morning’s rocket attack, most assume that Netanyahu’s government will retaliate to Hamas and Gantz will likely back this decision. This also has consequences though, as any misstep Netanyahu takes right before the election will be met with Gantz and his alternative government. Therefore, some members of Netanyahu’s party have already started discussing delaying the election in hopes that people will forget Hamas’s fearlessness of a Netanyahu lead government before they go to the polls. But the far-right politicians aren’t fools either, claiming that delaying the elections would be a win for terrorism. As I finish writing at 3:10 PM ET, my phone goes off again, signifying more airstrikes in the south. We are left with one question, if and how large of an operation is about to take place on the doorstep of elections.

About the Author
Eitan Moed is an American born Israeli citizen. He made Aliyah when he was ten years old. Eitan has attended American public school, Israeli religious and non-religious public schools, Yeshivat Ma'ale Gilboa and Mechinat Nachshon. He has also worked at multiple Jewish summer camps both in Israel and in America, most notably, Ramah Day Camp in Nyack. Currently, Eitan is the Jewish Student Life Coordinator at Michigan State University Hillel.
Related Topics
Related Posts
Eitan Moed
Comments