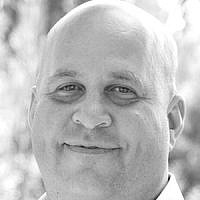 The Blogs
David Greaves
Let My People Slide
Apply for a Blog
Please note that the posts on The Blogs are contributed by third parties. The opinions, facts and any media content in them are presented solely by the authors, and neither The Times of Israel nor its partners assume any responsibility for them. Please contact us in case of abuse. In case of abuse,
Report this post. 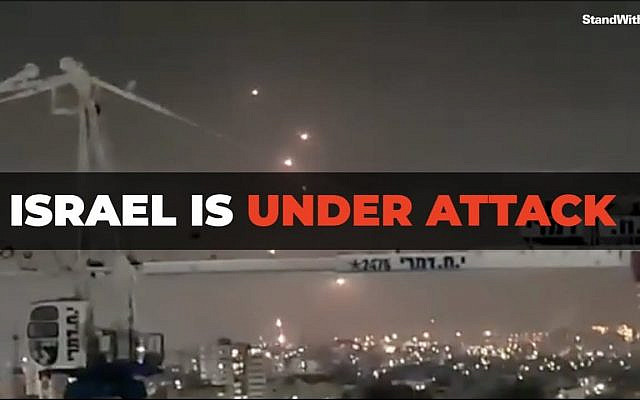 Courtesy of Stand With Us.

This is happening over the skies of Tel Aviv right now and has been happening over the skies of southern Israel for the past 48 hours. The coloured tracers you see is that of Israel’s missile defence system called the Iron Dome. It detects a hostile projectile and intercepts it mid flight knocking it out of the air. I unfortunately witnessed it live when it protected my family in 2014 but fortunate for Israel’s ingenuity and commitment to protecting all of it’s citizens. The Iron Dome is 90% effective but 10% still get through as well there is a significant amount of shrapnel that falls from the skies when a missile is intercepted so the danger is still very real even with a successful interception. There have been more than 500 rockets in the last 48 hours, so you can do the math. And this continues.

Today is Tuesday, May 11, 2021 and much like the summer of 2014 and numerous times before; my friends, family, colleagues and all the residents of Israel, are being terrorized by indiscriminate rocket fire. They are sleeping in safe rooms and bomb shelters and covering the ears of their four-year-old’s. It doesn’t matter if you are Christian or Jewish or Muslim, the rocket that falls in Tel Aviv or Jerusalem or Sderot is not targeted for you necessarily, it is, what they call in sports, ironically in this case, ‘A Hail Mary’. Throw it up and hopefully the right person will catch it, throw shit against the wall and hopefully something will stick or in this case, launch a rocket at a population and hope you score a direct hit. That direct hit could be young or old, Druze or Bahai or fall in a Jewish or Muslim neighborhood. Sadly however, the real score for them is if they kill a Jew. Even writing these words are difficult and I hope that reading them turn your stomach too, Jew or not. If they happen to kill an Arab, that unfortunate soul becomes a martyr, whether they wanted to be or not but if they kill a Jew, they will be dancing and handing out candy in the streets of Hebron or Rafiach. Ironically yet again, some of those Hail Mary’s have fallen in the holy city of Jerusalem, home of the holiest sites for the Jewish people and one of the holiest sites in Islam after Mecca and Medina. I can’t even fathom if just one Israeli rocket were to fall, even by accident on any of those holy cities. I can imagine though how swift and ugly the condemnation of Israel would be. As of today, there is very little coverage of this in the mainstream media, one of the reasons I felt compelled to share this. There have been more than 500 hundred rockets that have been fired from Gaza into Israel’s sovereign territory just in the last 48 hours and they continue to rain down.

Unfortunately, I have had firsthand knowledge of rockets over Tel Aviv. In July of 2014 I was with my family in Israel driving on a beautiful day when we heard sirens. Actually, we didn’t really hear them at first but all the cars on Hayarkon street stopped and the people ran from their cars and huddled up against a building. Downtown Tel Aviv, around 4pm and my family including my 76-year-old father ran from our vehicle to join the rest of the people up against a building, an image that might conjure up another time when groups of Jews were huddled up against a building or a wall afraid for their lives and awaiting their fate. It is a sickening recollection.

What surprised me that day was that so many of the Israelis we were huddled with were also crying and terrified, something that was a bit worrisome – I’m not sure why I thought they react differently, they were also under attack, but wouldn’t they at least be used to all this? You know that feeling when you hit terrible turbulence on a flight and the first thing you look for is a flight attendant. If they look worried, then you know something is serious but what you hope to see is them smiling and carrying on with their cart service as if there is nothing happening, so this was a poignant moment among many at that moment. It was terrifying and I was hoping our new Israeli friends would offer some kind of reassurance but that was not the case and I felt helpless. The kids as you might imagine were horrified and crying, and as a parent, I felt helpless. Quite possibly the worst feeling for a parent is when your child is looking to you for comfort and reassurance and you are unable to even fake it because you are just as terrified, a low point for any parent, I’m sure. That day we witnessed firsthand the Iron Dome destroying a Hamas rocket over our heads in downtown Tel Aviv. There are no words to describe that amidst one of your darkest moments, you feel like cheering.

I’ve always had a saying, not exclusive to me. If something needed to be fixed, I would call ‘the guy’. After a big snowfall we’d be waiting for the guy to come and shovel us out and when the car wouldn’t start in the dead of winter, I called CAA and waited for their guy; mostly mundane scenarios but it was a terribly upsetting while in the midst of all this, my 6 year old son looked at me with tears in his eyes as my dad and I were trying to shelter him, and the terrifying sound of the air raid sirens were still wailing, he asked me “Why is the guy trying hurt us?”. It fit perfectly, was so sweet and so terribly heartbreaking. I don’t quite remember what my answer was, but I started thinking about that guy. Not his rocket but the actual guy that lit the fuse that changed our lives.

Who was he? Is he still alive over there? we are now inextricably linked via the most horrendous of incidences at least for me? It’s impossible to experience that and not feel a bit different even if just during times like these that you understand a bit better what a population under fire feels like. It has been 7 years since that day. I have been to Israel numerous times since and have driven by ‘the spot’ many, many times. I still see us there, and shake my head at this world we live in. That some guy, 50kms away tried to kill my kids. – These are not just words, imagine that for a moment. That for him would have been a score, something to celebrate and then I juxtapose my son’s sweet tearful eyes and I will forever be grateful to Israel and their team of ‘guys/gals’ for its commitment to protecting its people.

Out of the frying pan:

A few days later we flew back to Canada. It was tough for me, I found myself thinking about our experience and my friends dealing with the escalating war in Israel. I couldn’t stop seeing my kids’ faces and how tormented they were. I wondered how people lived like that every day. How do parents put on a brave face for their kids when at any time day or night you might find yourself running to a shelter? How do you comfort your kids? After a week of being home I decided to go back to Israel to volunteer during Zuk Eitan with an organization call Lev Echad or One Heart, in a town called Kiryat Malachi, about 20kms from Gaza. As most would agree, not the smartest thing in the world to do but I could not stay ‘here’. I felt it was my obligation. I remember the flight from Toronto to Tel Aviv was less than half full. I have never seen that before. Literally no one on that flight.

I was terrified the whole time I was there. Not knowing when the sirens would go off has a way of making you sick. I suffered from a high level of stress being so close to Gaza that it made me physically sick. But at the same time, the love of the families I had the pleasure of working with made up for some of the fear and stress. In one of the apartments there was a sign in Hebrew that read: “Those that volunteer are not afraid”. I might have been the exception in that regard as I was afraid until I finally landed all the way back home in Canada. While in Israel I also visited injured soldiers and their families, something I will never forget. There were times I had to walk out of the room because it was too upsetting to see. And here we are again…

Today I have the pleasure of serving as the Executive Director of the Jewish National Fund of Canada, Manitoba/Saskatchewan region. I take an immense amount of pride in working for an organization that has invested so much for over 100 years, in building the state of Israel, literally from the soil up. JNF has planted more than 240 million trees and continues to do some of the most meaningful work building a country so many are looking to destroy. JNF is the metaphoric Iron Dome. We continued to build, fix and defend Israel by providing opportunities for people to fulfill their dreams of contributing to the wellbeing of the state.

In my volunteer time, I am a member of the Olympic Committee of Israel’s plenum. I serve as the president of Bobsleigh Skeleton Israel and was a member of the Israeli Olympic team in PyeongChang, South Korea in 2018. My work and my volunteer lives enable me to pursue something that I love, building, supporting and representing Israel. I am grateful for that every day. And as I am writing this, I have just been notified that one of my newest aspiring Olympic athletes, Denis, has been called up by the IDF. B’hatzlacha my friend.

Let us pray for shalom v’sheket.

About the Author
David is a dual Canadian/Israeli and spent 10 years as a development director for the Jewish Federation of Winnipeg and the Jewish Foundation of Manitoba. In 2014 David established his own consulting firm, Protexia, specializing in creative philanthropy solutions for the not for profit sector and charities of all sizes. In 2020, David accepted the position of Executive Director of JNF Canada, Manitoba/Saskatchewan region where he works to enhance the State of Israel by supporting the many meaningful projects committed to by JNF Canada. David also competed internationally as a founding member of the Israeli Bobsled Team. David is now President of the Israeli Olympic Bobsleigh Skeleton Federation who's athlete competed in the Olympic Winter Games in 20218 in PyeongChang, South Korea. David was recently voted in as a member of the National Olympic Committee of Israel's Plenum.
Related Topics
Related Posts
Comments