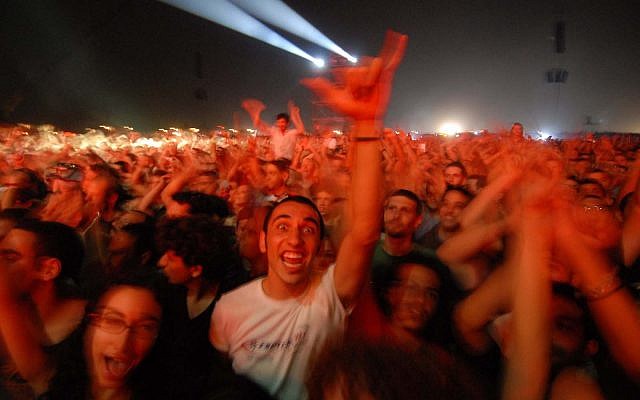 If there’s one thing Roger Waters knows, it’s that Israelis hate peace. This was the key message from the former Pink Floyd frontman at a panel last month at the University of Massachusetts-Amherst. Joining him were former CNN commentator Marc Lamont Hill, Palestinian activist Linda Sarsour, and Dave Zirin, a sports writer at The Nation, who quipped that he was there as the token Jew.

The event, called “Not Backing Down,” was billed as a panel on how it’s possible to stand against Israel’s occupation while also standing against anti-Semitism. But it was really just a giant rally for the Boycott, Divestment, and Sanctions movement.

Though I’m not a BDS supporter, I found myself moved by the first three speeches, by their passion and their reasons. It wasn’t until Waters mounted the podium that things took a turn. He began with a vignette that seemed to represent for him all the truth one needs to know about Israel and Palestine in just a few short sentences.

The story took place in 2006, after Waters accepted an invitation to play in Tel Aviv and got a lot of flack from pro-Palestinian activists. In response to their censure, Waters moved the concert to a model village where Arab and Jewish Israelis live together called Neve Shalom or Wahat al-Salam. The concert was staged in a bean field in order to accommodate some 60,000 concert-goers.

So far so good. But then the story shifted. “They spent the whole night going like they do,” Waters said, pantomiming fans enthusiastically waving their arms in the air, “until we got to the end of the evening, when I said — I stood up in front of all that, and said, ‘You are the generation of young Israelis who must make peace with your brothers and sisters in the neighborhood and bring in a new era of’ etcetera etcetera etcetera. And they went from, [here, Waters waved his arms again overhead] to ‘what the fuck’s he talking about?’ [here, Waters crossed his arms and scowled] – in a heartbeat. And it was one of the most chilling sights I’ve ever seen in my life.”

You can watch Waters tell the story here:

This vignette of 60,000 Israelis going from cheering wildly to scowling in silence when urged to make peace seemed to sum up everything Waters thought we needed to know about Israel.

But to me, the story seemed suspicious. 60,000 people instantly reacting the same way to any political issue is improbable enough, but 60,000 Israelis? Impossible, especially when the audience would have included supporters of Neve Shalom as well as Palestinian Israelis.

It took me a few days and the help of Israeli friends to locate an audio recording of the 2006 concert. What happened at the moment Waters mentioned peace-making was pretty much the opposite of what Waters described.

“We can’t lose this opportunity to thank you all so much for coming to Neve Shalom, the village of peace,” Waters says, to wild cheering. “It means a great deal to them, and also to me.” More wild cheering. “And, I may be speaking out of turn, but I believe that we, the rest of the world, need this generation of Israelis to tear down the walls and to make peace with their neighbors.”

Here the cheering grows even louder.

“We love you for it, and we hope to come back.”

In real life, Waters’ words of peace were met with the same verve and joy as his music.

Since at least 2017, Waters has been repeating this lie. He told it to an interviewer from the Munich-based Süddeutsche Zeitung, one of Germany’s largest dailies. He told it to Liberation News, a socialist newspaper. He told it at a Vancouver event in October 2017 to promote Canada’s participation in BDS.

A 2011 interview with Al-Jazeera proves that Waters wasn’t simply misremembering. After Al-Jazeera shows a video clip of that exact moment in the concert (at 18:33), Waters affirms that the audience was “extraordinarily enthusiastic.” He adds, “there were [only] one or two [negative] responses to [his call for peace] saying, who does he think he is coming here and telling us what we should be doing?” and then he praises the Israeli peace movement.

Afterwards, I kept replaying Waters’ 2019 revisionist version of the story in my head. The gist of his message was that Israeli society is monolithic. That all Israelis reject peace and don’t care about what happens to Palestinians. That if you appeal to Jewish Israelis’ humanity (because Palestinian Israelis are invisible in Waters’ reality), you will experience “one of the most chilling sights” you’ll ever see.

Telling his listeners about the passion for peace his Israeli audience expressed could sustain hope and open-mindedness. But the story he told could only breed unquestioning hatred, not just hatred of Israel the state, but of all Israelis.

Why did Waters lie? I don’t have an answer, but I do know that Waters is peddling hatred, clothed in the velvet robes of caring for the downtrodden. Instead of proving that one can oppose the occupation without being anti-Semitic, Waters proved that one can get away with hatred without anyone in the BDS movement noticing or standing up to oppose it.

And there was ample opportunity to do so. For example, during discussion, moderator Vijay Prishad, who made a point of raising only the most provocative questions submitted by the audience (itself a way of inciting anti-Israel sentiment), read out, “Why isn’t there an Israeli perspective on the panel?” Though Prishad invited Sarsour to answer, Waters grabbed the mic. “Can you imagine the misery, to be part of that supremacist apartheid state that exists at the moment?” he said, “So we want [Israelis] to be liberated.”

An older white man at a leftist event upstaging a woman of color, telling everyone how to “save” any ethnic group, would normally get a reprimand. That’s not what happened. When Sarsour finally got the mic, she asked why a pro-Palestine event should be balanced, when there are so many pro-Israel events that are not. “They have had more platforms than any of us in this room could ever organize,” she said.

Sarsour stridently claims to be a Jewish ally, and that was a moment when she could have proved it. Instead of counterpunching against the question, she had a chance to reframe it, by calling out the panel for not including someone from any of the Israeli organizations working for political freedom for Palestinians and Palestine. That could have short-circuited the myth of Israel’s inhumanity that Waters was pushing.

It is so tempting to demonize Israel, especially now, when Israel’s prime minister opens the door to pro-fascist elements and talks of annexation, when its ruling coalition is fighting on so many fronts to downgrade Israel proper from a democracy to democracy-lite, while Palestinian land continues to be stolen, olive trees uprooted, buildings demolished. There is so much to despise in the current situation that I can’t honestly blame someone if they think the only way to get through to Israel’s government is boycott, divestment, and sanctions.

I desperately want that not to be true. But even if it were true, that wouldn’t make the facile dehumanization of Israel’s people any less dangerous.

Waters portrayed Israelis as monsters, and did not even acknowledge the existence of a Israeli peace movement or of Palestinians or other minorities within Israel. Ultimately, Waters’ comments left me wondering whether the anti-Zionist left can escape anti-Semitism, when they are being lied to in such a manner.

Whether Waters was lying because he is anti-Semitic, or because he needs to split humanity into victims and oppressors, doesn’t matter. In either case, Waters was twisting his stories in a way that belied the whole purpose of the UMass panel, in a way that he knows or should know is not true. Where understanding was needed, Waters was inciting hatred. Whether or not we label his brand of dishonesty anti-Semitism, we need to stand together against it. Jews and our allies, whatever our understanding of Palestine or justice or peace, should be able to agree on that.