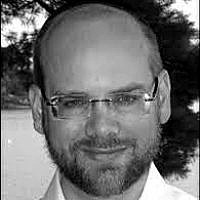 It was the week following September 11, 2001. Six months earlier I had gotten married, and five weeks after that my father suddenly passed away. I felt like the world was crumbling around me and I needed to do something different.

Prior to September 11, I had booked a ticket to Uman for Rosh Hashana, but the flight had been cancelled in the wake of that tragedy and the wave of security concerns following it. The idea of spending Rosh Hashana in Lakewood, where I was learning, or in Toronto, with my wife’s family, (wonderful as they are) was not working for me. I needed something very different this year.

Once I got to Kiev I needed to get a ride to Uman, and with a few other travelers hired a van that took us there. By now it was late afternoon on the eve of Rosh Hashana and time was getting short before the holiday would begin. As we drove along, the sun kept sinking lower, letting me know that soon it would be Rosh Hashana.

Aside from this, I had no idea where I would be eating or sleeping. My brother Shimon had traveled to Uman from Israel, but I had no idea how to find him amidst the thousands that would be there, or even what his plans were. Just before sunset (I hope) we pulled into Uman. I grabbed my sleeping bag and a plastic bag with a few snacks in it and ran up the hill to where Rebbe Nachman is buried hoping to catch a minyan (quorum) for mincha (the afternoon prayers).

I saw a large group of people praying under a canopy and across the street was a hallway outside an apartment. I tossed my stuff into the hallway, hoped for the best, and went to daven Mincha. Only later did I realize that I had davened by the tzion of the Rebbe (where he is buried). This was a bit problematic being a kohen (family descended from Aaron Hakohen that is not allowed to be under a canopy where someone is buried).

After praying Mincha and then Maariv (nighttime prayers) I wandered around hoping someone would invite me to eat with them, or maybe find some other solution. The refrain from a children story about a lost chick that goes around asking the various animals “Are you my mother?” rang familiar. I felt so lost.

Finally, I met a savior. He told me that there were three large tents set up and that people who prepaid before the holidays were able to eat there. There were Ukrainian guards at the entrances checking tickets, so entering without having one was not an option. He offered to give me a ticket if I would pay him for it after the holiday. I was more than happy to agree.

I went off in the direction of the tents, hoping to find my brother in one of them. Aside from wanting to see him, I was a bit concerned about sleeping arrangements. Although the ticket was for a specific tent, the guards were willing to let me in to see if I could find my brother, once I showed them that I had a meal ticket and would not be crashing.

I wandered around the tent, looking into hundreds of faces, but no Shimon. I went to the second tent and searched again, but no luck again. Finally, I went into the third tent and somewhat despondently looked once around. No brother.

I sadly accepted my fate, found an empty place at one of the long tables and sat down to eat the festival meal.

A little while later the dining room started hopping. Men were getting up, singing and dancing around the large tent, hundreds of them. I got up and joined them. By this point, I had given up any and all expectations of anything going how I thought it would or should and in doing so was able to let go and get into the singing and dancing.

It was a wonderful moment of being completely lost in the moment. I turned myself over to a Higher Power and thought to myself, “Do with me what you wish. It’s all good.” Suddenly I felt two hands clap down on my shoulders from behind. I turned and there was my brother Shimon dancing behind me with a huge smile on his face.

I got the message. G-d is running the show, and the sooner I let go and let G-d, the better things will be. As long as I held onto the illusion of being able to work things out, of being in control, the longer I would be missing a bigger picture.

Rosh Hashana is about seeing the bigger picture. It is about recognizing that there is a King running the show and that we are his subjects. When we look up and see Him, He looks back and shows us that He is watching out for us, and has been all along.