Soon we welcome Rosh Hashana, new beginnings, and a time for an accounting of ourselves, and our Jewish community.

Forty years ago this Fall, in Cincinnati, Ohio, I began a career of Jewish community service as Regional Director for B’nai B’rith District Two, a region reaching Westward to the Colorado Rocky Mountains. In 1980 B’nai B’rith International brought me to Philadelphia to organize new groups. 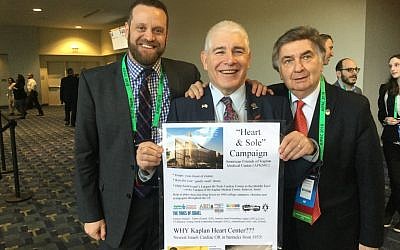 More recently, many thousands were served locally and nationally within my role as Academic Affairs Director for the Israeli Consulate in Philly, from 2004 to 2013.

My joke, the B’nai B’rith office was on the 2nd floor of the same building as the 8th floor Israeli Consulate. What does that mean, it took me 24 years to go up eight flights of stairs.

This is just background to accept a little experience in understanding the Jewish community and its challenges.

These are NOT unrelated. They are leading to catastrophic levels of intermarriage. According to the last Pew study, 3/4 of Jewish young adults will inter-marry, if they are not Orthodox. For the children of intermarried couples, only an 8% Jewish identification rate, more than 90% lost!

Let’s take the Israel component first. Jews are like everyone else … only more so. America is in a period of deep divide. For Jews the gulf is so wide that Rabbis shy away from Israel programs for fear of alienating one group of congregants from another.

One Israel achievement that we can all stand behind is Israeli hi-tech efforts to Save Lives.

So, I can tell you that Israeli health authorities have approved the building of the largest hi-tech Cardiac Center in the Middle East. They have located it in the most central, accessible place in Israel, Rehovot, at the Kaplan Medical Center, about 10 miles south of the main highway between Tel Aviv and Jerusalem.

With Israel on the road to hi-tech solutions to Heart Disease, the #1 killer disease in the West, for Americans, and especially for Women, this is a no-dispute cause to bring American Jews together. In addition, the Israeli health system will more than match American donations for this project.

Fourteen American and Israeli organization have joined together to help promote this common project which is called the “Heart and Sole” Campaign. The word “Sole” refers to a “painless fundraising” component of environmentally attractive recycling of gently used shoes, taking up space in everyone’s closets.

Launched at AIPAC in March 2018, the “Heart & Sole” project took on a new flavor this summer to deal with Jewish young adult alienation from Israel, and from connection with each other.

So how does one engage young adults as “foot soldiers” for the campaign, and more importantly involve Rabbis who are becoming more hesitant to support Israel projects?

Rabbis know to keep their doors open they need to engage young adults for future leadership, and for the future Bar and Bat Mitzvah training of their hoped for Jewish kids. But the investment of time and energy often lacks the proper ROI.

Scores of young professionals (YP’s) attend services as individuals, either with family, or perhaps find a shul in a distant community with Synagogue Connect.

YJLC and the “Heart & Sole” partners are working together to promote a Rosh Hashana “10 minute YP Meet-Up @ the Israel ShoeBox.”

A simple program, it involves an on-line sign up, a table pre-set with wine, apples and honey, and a synagogue announcement. The young adults are already there. AND they want to meet each other. “Heart & Sole” provides a sample easy program to follow, blessings, and a digital Israel Cardiac Shoe Box Poster, that can be printed locally at minimal cost. “Heart & Sole” organizers recommend a synagogue staff or lay leader to supervise and take visual notes of young adults attending, for future leadership engagement.

The vision is that come 2019, 2020 and years into the future, as Birthright has been accepted as part of the American Jewish cultural connections, the Rosh Hashana “10-Minute YP Meet-up” will be when young adults can count on meeting new friends and reconnecting with past friends… within an organized event geared to giving them follow-up entre into the Jewish community world.

Full disclosure, this project involves currently 14 major Jewish and Israeli organizations, two of which I coordinate, YJLC, and the American Friends of Kaplan Medical Center.

About the Author
Lou Balcher served from 2004 - 2013 as Director of Academic Affairs to Consulate General of Israel to the Mid-Atlantic Region. He also served as Education Director for Congregation Tifereth Israel in Bensalem, PA, and as administrator and teacher for Gratz College's Jewish Community High School. He is a former Membership Director for the Philadelphia and Cincinnati regions of B'nai B'rith International. For three and a half decades, he has coordinated post-college young leadership programs for Young Jewish Leadership Concepts. From 2014 - Spring 2021 he consulted as National Director of the American Friends of the Kaplan Medical Center, Rehovot, Israel which serves more than one million Israeli citizens. In the Spring of 2021 Balcher and a team of national leaders inaugurated the American Foundation Creating Leadership for Israel (AFCLI) - "the newest voice for Americans for Israel."
Comments