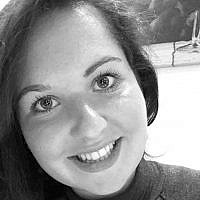 The Blogs
Emma Mazo
Apply for a Blog
Please note that the posts on The Blogs are contributed by third parties. The opinions, facts and any media content in them are presented solely by the authors, and neither The Times of Israel nor its partners assume any responsibility for them. Please contact us in case of abuse. In case of abuse,
Report this post.

I was born and grew up in Germany as the child of Russian-Jewish immigrants. Besides the occasional invitation from family friends for Shabbat dinner, a Bar Mitzvah, and going to synagogue twice a year, I didn’t participate in Jewish life. When I was 14, I joined a trip organized by the Jewish community Frankfurt to celebrate Pessach in Italy with a bunch of teens. I was so excited to spend time with ”real” Jews who actually turned out to be even less Jewish than me, eating Big Macs in Rome while I stuck it out for a week on Matzo. On top of that, it was pretty strange to grow up as a Jew in Germany, being surrounded by former concentration camps and that particular history which unfortunately cannot be undone.

When I began my freshman year at Baruch, I encountered a whole new world. Rosh HaShanah was approaching, and, despite not celebrating it for many years, I was looking for something familiar—a community I could be part of.  But where, how, and with whom? First idea – Google. I knew that there were many Jews in New York, but where could I find them? Online, I got flooded with information, overwhelmed with more questions than answers. Was I even allowed to join another community while being an outsider? Next idea: Hillel. I had never heard of Hillel before, but I knew it was a Jewish club – they must know something that could help me. I’m sure you know how scary and intimidating it is to approach a group of people alone. When I walked into Hillel, the girl who sat on the couch immediately looked up, smiled and asked what my name was. Honestly, my first impulse was to turn around and leave.

Quietly, I mumbled that I just want to know where to celebrate Rosh Hashanah. I felt strange, like I didn’t belonging there. Was I even “Jewish” in their eyes? They would know that I didn’t have a Bat Mitzvah and didn’t speak Hebrew. They would think I wasn’t a “real Jew”. G’d, I even ate pork! They would know and make fun of me as soon as I left.

My fear dissipated shortly after. Instead of questioning me and why I was there, Baruch Hillel staff and students helped me find a Rosh HaShanah dinner and to celebrate Yom Kippur my freshman year.

Soon, Hillel became my community on campus; a place to go during break, a space for friends and mentors. I came to find the answer to one question, but found so much more – it’s crazy! It was if someone knew how lonely I felt as an international student going to a commuter school where it’s extremely hard to connect with the other students in class. In that first year, I became a Jewish leader on campus. Every Thursday, I listened to amazing Jewish speakers, from Holocaust survivors to Assi Azar, one of the most famous Israeli TV hosts, celebrated Holidays, or just ate lunch. Hillel sent me to AIPAC 2018 in DC, which was an awesome experience, as well as to the impressive i3 Women’s Summit, where I could listen to the most influential female leaders of NYC speak and an Israeli band of disabled young adults perform Hallelujah. Not only became Hillel my community – I became a part of Hillel.

Learning about KAHAL: Your Jewish Home Abroad, an organization that helps connect Jewish students abroad, I knew I had an opportunity to make sure other abroad students felt comfortable. I became a KAHAL Intern, helping students studying or traveling abroad, like me, find Jewish communities. So far, I’ve helped connect students to amazing travel experiences in Buenos Aires, London, and Sydney, among others! I’ve helped them have great Passover experiences and reach KAHAL’s Passover goal 2018: over 1000 seders in more than 110 cities! And even though my task is to connect others with Jewish communities abroad, KAHAL also provided me with the unique opportunity to see something new: I—as a Russian-speaking German Jew studying abroad in the USA—went on an unforgettable JDC trip to Argentina and Uruguay last month. If you’re going abroad, my advice to you is this: Don’t hesitate to reach out. Whether you’re in Paris or Shanghai, there is a Jewish community there that can take you in, just like Baruch Hillel embraced me. There are host families to take you in for Shabbat dinner and local Jewish students to go out with for drinks. Rosh HaShanah this year is September 9th (sign up!) and you don’t have to celebrate alone!

P.S. By the way, wonder where I am celebrating Rosh HaShanah? I got invited to the Chabad community of a girl from FIT who I met at a Hillel Shabbaton, and she is one of the people I call my friend now.

About the Author
Emma Mazo was born and grew up in Germany as the child of Russian-Jewish immigrants, sophomore studying Psychology in Baruch.
Related Topics
Related Posts
Comments