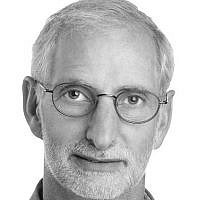 At the time of writing, not all ballots have been counted and the final allocation of MKs may be different to the preliminary numbers bandied around in the press. (According to the official Election Committee website, a total of 4,843,023 ballots were cast in Tuesday’s election, of which 4,101,766 were counted and are reflected in the redacted table below.)

Once the remaining ballots are tallied, Meretz may just squeeze past the 3.25% minimum “Electoral Threshold”. The current prediction of a 5 MK majority for Netanyahu and his “All Right” coalition -may be reduced. It is clear however that the Bibi Bloc has a working majority in the Knesset and hence will form the next government.

While still to early for a final analysis, a few important observations can be made based on the partial results detailed below.

Knesset Election Results taken from the Official Government Website as of November 2, 2022 at 14:06: 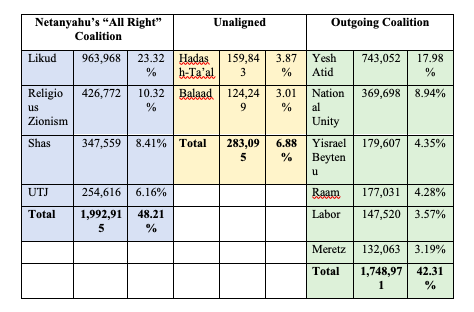 Netanyahu and his “All Right” coalition do not have a real “public mandate” to govern. They did not actually win a majority of the public vote.

More than a right-wing victory for the Bibi Bloc, the center-left, Pro-Democracy Bloc, lost.

The sudden “majority” and victory of the “All Right” coalition stems not from any fundamental change in the evenly divided public sentiment. It is due to the vagaries of Israel’s election system and the failure of the leaders of the Pro-Democracy Bloc to make the necessary technical arrangements to ensure that their supporters’ votes were not just “counted” but were also translated into seats in the Knesset (the Israeli Parliament).

If the “Electoral Threshold” was set at just 3% and not 3.25%, Netanyahu’s “huge election victory” would have deflated into another hung parliament divided evenly (60-60) between these two Blocs, as based on the above figures, both Meretz and Balaad would then have attained the minimum threshold to have their representatives seated in the Knesset.

The leaders of the Pro-Democracy Bloc were aware of the relatively high minimum threshold and could have easily made technical arrangements to overcome this impediment.

The primary mistake made was that of the Labor Party leader, Meirav Michaeli. She refused all pleas made by many leading politicians, including both Zahava Galon, leader of the Meretz party and of Prime Minister Yair Lapid, that Labor and Meretz run together on a joint list. One needs a microscope to detect the policy differences between these two parties. Yet, in her delusional desire to restore Labor to the former glory of the Rabin-Perez era, she scorned all offers of a united List. She gambled, at the risk of the Bloc, that separately, Labor and Meretz could do better than they would together and that while they may come close, they would both past the minimum threshold. A highly dangerous game of brinkmanship – and a losing gamble as it seems at the time of writing that the relatively high number of valid votes cast in this election (more people voted than in previous rounds) means that the finite number of Meretz voters turns out to be just slightly under the required 3.25% Electoral Threshold for a party to gain seats in the Knesset. Hence instead of 4MKs – Meretz will have 0 MKs in the new Knesset. As effectively these 4 MK’s are divided among the nearly equal Bibi Bloc and the Pro-Democracy Bloc on a pro rata basis – this means that the Bibi Bloc picked up 2 MK’s thanks to Michaeli’s intransigence – not because of the way the public voted. Bibi’s “majority” was not awarded to him by the electorate but was rendered to him on a platter by Michaeli.

The second failure of the Pro-Democracy Bloc was due to the disintegration of the United List. I won’t pretend to understand the intrigues involved, but while for the outgoing Knesset, Hadash-Ta’al and Balaad had run together on a joint List, the United List, this time around, at the last minute when filing with the Electoral Commission, they failed to agree on the inter-party allocations on the joint United List. So, they went their separate ways, each filing their own list: one for Hadash-Ta’al and one for Balaad. Yesterday, despite desperate last-minute efforts to “get out the vote” in the Arab sector, Balaad, running alone, failed to attain the minimum threshold (and Hadash-Ta’al too had great difficulty in reaching this threshold). A net gain of 2 seats to the Bibi Bloc at the expense of the Pro-Democracy Bloc. Thanks to a leadership failure, not due to any change in the public vote, the Bibi Bloc gained another 2 MKs at the expense of the Pro-Democracy Bloc.

I am aware that many friends overseas, supporters of Israel, are horrified, or are going to be horrified, when they see Israel’s new government and witness it executing the policies which they say they were elected to implement. The newly empowered Bibi Bloc have a firm belief that whatever a bare majority of the Knesset approve, must be executed. No checks and balances. No minority rights. No “some things just aren’t done”. We are in for a period of: “tyranny of the majority”. A deliberately weakened and cowered judiciary will not provide an effective shield.

It is going to be hard to watch. Even harder for us in Israel who are going to have to live with the results of this election – probably for the full life of a Knesset – i.e. the next four years.

Just know and appreciate that the governing Bibi Bloc has the same type of mandate as President Trump had. Trump lost the popular vote, but due to the complex electoral college system – he became the duly elected leader of the USA for the next 4 years.

Similarly, without really winning a majority of the public vote, the Bibi Bloc has won a majority in the Knesset and will govern Israel as they see fit, for the next 4 years.

Democracies are not perfect systems and duly elected leaders do not always have a real “public mandate”. And in the spirit of the newly elected Bibi Bloc religious zealots: Heaven help us.

About the Author
Jonathan Schwartz works as an independent commercial lawyer, with a focus on high-tech and medical devices. Born and raised in Johannesburg, South Africa, he made Aliyah at the age of 19, and moved to Zur Yigal after spending time in Jerusalem, Kibbutz Tzora and Raanana. He is married with 4 children.
Related Topics
Related Posts