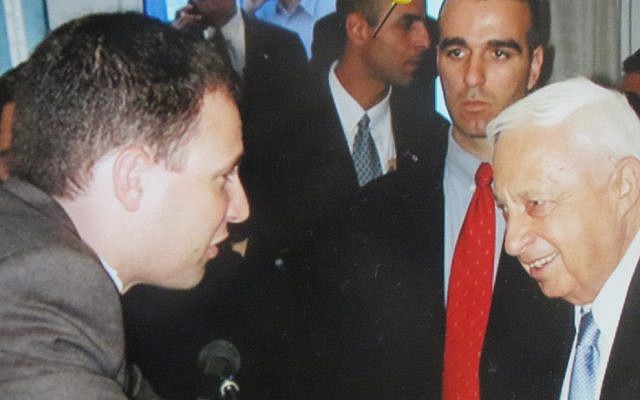 The columnist (left) with General (and PM) Ariel Sharon in 2002.

In the Woody Allen film, “Bananas,” a military chieftain takes over “San Marcos” amid high revolutionary hopes, but swiftly displays that power has driven him mad. He proclaims that the official language will be changed to Swedish, that citizens who are not yet 16 “are now 16,” and that underwear will be worn on the outside, “so we can check.”

Military figures rising to power should come as no surprise. Authority can derive from political legitimacy, which is hard to organize, or force, which is not and which they have readily available. Their poor record when thus tempted is predictable as well, because thugs are not the best of people. From Mussolini to Idi Amin, generalissimos have left behind a subpar legacy, often horrific and mock-worthy on occasion.

In the democratic and developed world, however, the “generals” (to use a shorthand term) do have their uses, especially in times of crisis. America’s Eisenhower and France’s de Gaulle still have nostalgists. In today’s Washington, military figures like John Kelly, James Mattis and H.R. McMaster were seen as keeping a dangerous president on the rails, and their departures have upset markets.

And in Israel, the only election outcomes supported by the educated classes in over 40 years have come when generals led the center-left, the side that wants to detach from the Palestinian-claimed territories: Yitzhak Rabin in 1992, Ehud Barak in 1999, and Ariel Sharon in 2006 (despite being in a coma, plus a lifelong right-winger; long story). Only they were trusted by enough voters to take risks for peace.

This is because when armies are under clear civilian control and do not arrest dissidents or send tanks into the streets, the generals operate in a context that draws support from all ranks of society. Ordinary people appreciate them as national symbols and protectors of sovereignty. The elites can relate to them because, generally sharing the same demographic, they trust them not to be buffoons.  Therefore the generals possess a rare ability to bridge the divide that grows more toxic by the day between the masses and the elites on this planet, from pole to pole and coast to coast.

It’s especially true in Israel, where the generals have been reasonably educated and intelligent, pragmatic and secular people who mostly possess a Western cultural mindset. That is the same as the nation’s elites in the worlds of business, science, the judiciary, academia, politics, the media, and much of the dominant culture.  In all these circles, support for the right wing and its dragging of the country toward being a binational apartheid-like state is very low indeed. The masses see this and their disdain for the elites (among other things) drives them away from voting for peace. But when the generals are at the fore, the dynamic grows complex.

No one who has talked to top people in the army, Mossad, Shin Bet and even police can be the least bit confused about where they lean. It should have become clear to the public at large by the 2012 documentary “The Gatekeepers”: based on interviews with the six then-living heads of the Shin Bet, the very organization tasked with securing the occupation, the film revealed all of them to be clear-eyed about its disastrousness.

Yet the center-left in Israel has failed to leverage this gold mine in a breathtaking display of incompetence (one of several incomprehensible lapses, including somehow alienating almost all the Russian immigrants). They have never run a single ad clearly making this point, and have consistently underplayed the astounding security gallery that supports the logic of their cause.

It is true that some of the generals would have hesitated at seeming “political” (their fear of this is comically similar to that of journalists). And some have egos that will not accommodate taking a back seat to any other.  But most could probably be compelled to passive backing at least. The counterpunch by far lower-ranking right-wing ex-officers  would have been so much less impressive as to underscore the truth (Likud’s Yoav Galant and Avi Dichter are outliers, and not convincing ones; both have backed the center-left).

It’s also true that not all are viable as political leaders. Yitzhak Mordechai and the late Amnon Lipkin-Shahak enjoyed only modest success; Shaul Mofaz rose fast but fell; Moshe Yaalon struggles to attract support; Yuval Diskin cannot seem to make himself understood. Mostly these are cases that lack either drive or charisma. Ehud Barak’s current unpopularity deserves doctoral study on its own, relating to an excess of both intelligence and hubris.

Notwithstanding all that, the trust security figures enjoy before they even speak is evident in the strong current support for retired military chief Benny Gantz, who is polling almost even with Benjamin Netanyahu before having even uttered a political word.

The feeling is now very strong in certain circles that the right has placed Israel on a national  suicide path and must go before it is too late. The incumbent’s legal entanglements both lend piquancy to the point and offer a useful device.

A decisive move by the generals could be joined by the most impressive leading figures in the country in practically every other domain, except perhaps soccer. While a party of the elites is dangerous – just ask supporters of Remain in the 2016 Brexit referendum – putting the security people at the forefront will have unique potency in Israel, and at a certain point there is critical mass.

The solution does not have to include a general as candidate for prime minister, although Gantz does seem to be an option based on current polls. It is an interesting tactic but an increasingly ridiculous one that he has not yet spoken. If he should cool off or flame out once he does, a viable option is for the movement to back Yesh Atid, led by the hungry, charismatic and distinctly non-military Yair Lapid.

If the generals love the country they will dawdle no further and need be neither bribed nor begged. Oddly, and amusingly, the Arab world would welcome it as well.