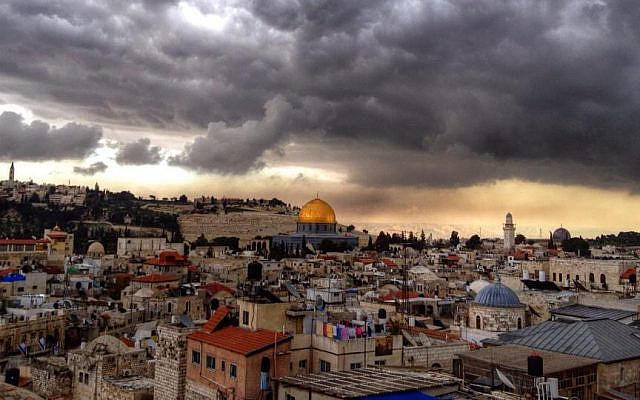 I have this friend.

His name is Shadi.

He’s an Arab and he’s also an Israeli police officer.

He lives in Jerusalem, just outside the Old City and the guy has a major sweet tooth.

Anyway, he had a day off and he went to the Old City for kanafe – as one does when one lives near the Old City and has a major sweet tooth.

And he had his gun with him because in Jerusalem peace dances with angels and demons on the head of a pin and you just never know.

Even when you’re off duty.

So he was there and had his kanafe with his friends – kulshi tamaam – when he gets a call.

It was his superior.

And even on your day off when you’re a cop in Jerusalem, you answer phone.

“Hey, Shadi,” his superior said,”We just got a call that there may be a terrorist in the Old City — some Arab guy with a gun – where are you?”

His eyes darted left and right.

“Where was the Son of a Whore spotted?” He asked.

“Near Damascus Gate. He’s in a t-shirt and jeans and a jacket,” his superior answered

Shadi ran. He ran and ran. He pushed through the throngs of people on the narrow street – past the spice sellers and the place with the fragrant coffee, past the man who mends shoes, and the woman who sells dark bitter greens. He ran and ran, his heart thudding in his chest

Shadi’s chest heaved and burned and his heart raced, but this was part of the job – he knew what he signed up for when he became a cop.

Down the alleys back and forth, he searched and searched.

It was his superior.

Shadi answered, panting: “We didn’t find him yet, the Son of a Whore!”

“Emmm… this is awkward. But I need to know.”

“And you have your gun?”

“Shadi,” his superior said. “Shadi… I don’t know how to tell you this… oh man. FUCK! Apparently, some Jewish guy saw you there at Jaffar speaking Arabic with your gun, and thought you were a terrorist and called us. So, we’ve been chasing YOU the whole time! And you’ve been chasing yourself! We’ve been running in circles!”