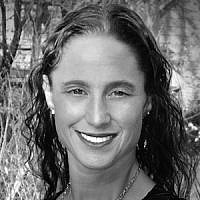 I ran up the hill to the Israel Democracy Institute (IDI) again this morning. The hill is long and steep and my legs start to burn as I climb the incline to Pinsker Street.

“Don’t slow down,” I convince myself with each step. Push a little harder. A little more. And then I arrive, turn right to reach the entrance to my new job. Smile. Turn around. Start again.

This morning’s run – and each run before it — was just a dress rehearsal. On Sunday, the curtain rises and I start in my new role as director of international communications at IDI.

A few months ago, as I pondered my family’s return to Israel, one of my first considerations was employment. Where would I work? Would it be in my field? Professional enough, serious enough, meaningful enough to keep me engaged? Would I work with Israelis or Americans? Be in an environment close enough to home and school that I wouldn’t need a car? Would I be able to continue in my roles as workaholic/mom-aholic, in which I thrive best?

It’s so scary to start over. Terrifying. Yet thrilling.

To start my job search, I looked at the Nefesh B’Nefesh website, where there is a wealth of information about how to land a job in Israel.

Then I joined several important groups and visited a number of helpful websites recommended to me by Rachel Berger, Nefesh B’Nefesh employment specialist extraordinaire.

The unemployment rate in Israel is actually lower than in the States at 5.9% in 2014, according to a report by the Central Bureau of Statistics. I was correctly confident. And blessed. I had several job offers more than a month before I ever moved to Israel.

I chose IDI because I wanted to do something that impacts the thread of Israeli society. To work somewhere where my behind-the-scenes work could influence our country’s future and where how hard I work could impact my future in Israel.

I also wanted to work with Israelis where I would have the privilege of on-the-job ulpan. I am fluent in Hebrew, but using it every day, in every meeting, the lunchroom, at the watercooler – this is an exhausting challenge. But it is also the only path to success in Israel, as I see it.

So I’ll sweat a little to make it to the top; the top of the hill is breathtaking. If you don’t complete the ascent, you’ll never know the thrill of swooshing down the other side.

My boss said to me today during a quick pre-start orientation, “We have high expectations for you.”

Don’t worry, Mr. Plesner, I have high expectations for myself, too.

About the Author
Maayan Hoffman is director of international communications for a leading Israeli think tank and an American-Israeli journalist since 1995. She raises her large, blended family a bus ride from the Western Wall.
Related Topics
Related Posts
Maayan Jaffe
Comments