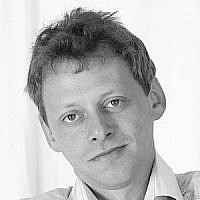 The Blogs
Lev Stesin
Apply for a Blog
Advertisement
Please note that the posts on The Blogs are contributed by third parties. The opinions, facts and any media content in them are presented solely by the authors, and neither The Times of Israel nor its partners assume any responsibility for them. Please contact us in case of abuse. In case of abuse,
Report this post.

Russia has been on the run from history for more than a hundred tumultuous years. History has many instances of countries wrongly cast as villains or the countries not given the credit where the prize is due. Very few can claim the honor of escaping historical “justice” not on one, but on multiple occasions. Russia is such a fantastically lucky country given the magnitude and severity of its crimes.

Until the early twentieth century, Russia played the role of a growing European power, at times punching above its weight. Though it did acquire the name “Europe’s Policeman,” its self-interests and policies to achieve them had been no more sinister or bloodthirsty than the competitors on the continent. That changed with the Jewish Pogroms of 1904-05. That feeble attempt at genocide was the culmination of a century of the policies of Russia’s government to solve “the Jewish Question.” The name of the question itself was nothing more than a euphemism for the attempt to make its Jewish subjects, millions of whom it had accidentally acquired as the result of the partitions of Poland,  less Jewish or not Jewish at all. In many ways, Russia’s approach to its Jews mimicked the one currently articulated by Russia of today towards Ukraine. The striking commonality between Russia’s view of Jews back in the early twentieth century and of Ukrainians nowadays is the refusal to view them as a nation. However, with the Jews the policy had indeed achieved at least some of the goals. Millions of them left Russia for the West and, as a twist of historical irony, created the most prosperous and politically influential Diaspora community in the United States.

The pogroms did not go unnoticed by the West and specifically by the United States with its growing Jewish influence. The stigma of pogroms played a certain role in the US’s attitude towards Russia. In particular, it was decisive during the Russo-Japanese War. That Cain’s Mark might have stuck to Russia but if not for the First World War that suddenly and overnight changed everything. Every crisis is an opportunity and that is certainly true about Russia’s place in history.

History is written by victors as an oft-repeated observation proclaims. That is the reason why Germany is blamed for the absolutely pointless carnage and misery of the First World War. Germany does bear some blame for the catastrophe that engulfed the world. However, Russia bears at least similar responsibility. Its major contribution to the start of the hostilities was the most striking as Russia really did not want the war, was aware of its own ill-preparedness and could not afford it. Yet thanks to its alliance with the victorious Entente powers, its historical record as the instigator of the most unnecessary worldwide military engagement has been either muted or completely forgotten.

The years in between the world wars were tumultuous years for the entire world. Every country was preoccupied with its own crises and the collapse of the world economy and so the crimes of the nascent Bolshevik government went primarily unnoticed or silenced, as was the case with “Golodomor”, the genocide of the People of Ukraine, by the sympathetic intellectual circles and the press.

The Bolsheviks, from the day they seized power in the coup of 1917, were planning to start the global conflict to conquer the world and proclaim the fraternity of humankind under the communist banner as the ultimate goal of Marx’s “deterministic” vision of history. The Second World War did not become inevitable in 1933 with the Nazis coming to power in Germany. That view is a retrospective look at history through the lense of the victors, Russia included. That war became “deterministic” when Lenin arrived at the Finland Station.

Russia’s Bolsheviks government viewed the Nazi take over of Germany and its well-articulated military ambitions not only as a threat but rather as a useful vehicle for achieving its own goals. The Kremlin’s goal became to use new German fanatical leadership to destabilize Europe, to use it as cannon fodder to defeat France and England and weaken itself sufficiently enough to enable Russia to walk from Moscow to London in one festive victorious parade. The Pact of Molotov-Ribbentrop, and specifically its “secret” protocols, was the culmination of that strategy. That deal between the two devils, and with no souls exchanged, started the most catastrophic war in human history. The very first great massacre of the war was the killing of twenty-two thousand Polish officers, taken as POWs, by the NKVD troops.

Russia could have and should have entered the annals of history as one of the greatest villains that started the war that took millions of lives. Yet it did not. Russia got lucky again. Stalin miscalculated. He spent too much time playing internal Russia’s politics. He got used to the situation, especially after the Great Purges, that gave him all cards and he simply had to play them. He forgot Hitler had his own deck. The greatest irony in history is that Russia did start the war, but because it made an error in judgment of its fellow partner in crime, it ended up on the “right” side of history. It was a story of two murders who in the middle of a shooting spree turned guns on each other and one of them in self-defense decided to join the law enforcement.

Russia’s accidental participation in the Second World War on the side of the “good” not only erased Russia’s role in starting it, but generated enough goodwill and credit to sustain it through the decades of the Cold War. Throughout the entire Cold War, the West would always find a warm spot for Russia regardless of its antics and aggressive behavior. And when in the final days of the conflict President Reagan famously called it “The Evil Empire” most in the West ridiculed him for stating the obvious.

As it happens with every serial criminal the luck eventually runs out. Russia’s war on Ukraine is the aggression so brazen, so barbaric and so lacking in reason that there is no miracle that can stop the blame for this murder landing at Russia’s doorsteps. There is no Kaiser, Hitler or idiots useful enough to save Russia’s place in history and move responsibility someplace else. The most daring fugitive from history’s judgment has finally reached the end of its unmatched career.

About the Author
The author lives and works in Silicon Valley, California. He is a founding member of San Francisco Voice for Israel.
Comments