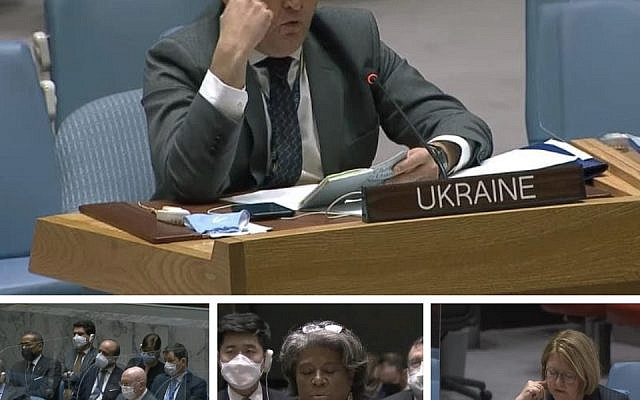 It has been another dramatic week, to say the least.  We have unequivocally condemned Russia’s vicious and unprovoked assault on Ukraine.

Further to our meeting with Ukraine’s Ambassador Oleksandr Shevchenko, we extended our hand to offer any assistance Ukraine may require. From our perspective, silence in the face of evil is not an option.  Given the threat to the Jewish community of Ukraine, we have further reached out to Israel’s Minister of Diaspora Affairs, Nachman Shai, to offer additional assistance if required and to stand in solidarity with Israel.

At our high-level meeting this week with Israel’s new Ambassador to Canada, Dr. Ronen Hoffman, we further offered all and any assistance in this regard.

As Russia presses into Kyiv, we are calling for expanded international sanctions and boycotts, beyond what has been moved by the Nato alliance. These must include an immediate cessation of flights in and out of Russia; an immediate stoppage of the flow of goods and services between the west and Russia, and the issuance of Red Notices for every member of the State Duma.

Make no mistake about it.  Russia’s invasion is directly connected to its perceived weakness of the West. As Melanie Phillips puts it, America is sending mixed signals to its foes: “America’s strategy to deter Russian president Vladimir Putin’s aggression against Ukraine is to impose sanctions. But its strategy to deter aggression by the Iranian regime is to lift sanctions.”  In the coming days, we will learn that the United States has reached a nightmarish agreement with the Ayatollahs – worse than the 2015 deal – which will allow the lifting of all constraints on Iran’s manufacture of nuclear weapons within two and a half years.

Russia has been carefully watching all this.  America’s perceived weakness with Iran is a green light for any violation to world order. Phillips is right when she observed that “the paradox of peace is that its maintenance depends on the credible threat of war.”  It is a horrible thought to consider — particularly in 2022.  Humanity should be further ahead. “When it comes to resisting abuses of power, however, diplomacy is the god that fails over and over again. When used as a strategy against implacable aggression, it turns its adherents into accessories to killing.”

All this is contributing to a meltdown of social norms around the world. Last week, we wrote an editorial about the disastrous breakdown of our social fabric here in Canada – as our own parliament sunk to name-calling.  How then can we be surprised when we hear about students performing the “Heil Hitler” salute in the classroom without shame, or fear? We condemn. We educate (as we have this week) and we work to change policy. Nevertheless, when there is a moral and ethical social breakdown between right and wrong, the world can quickly turn upside down, as we now witness in Ukraine.

The cracks in society are becoming ever more apparent. This week, we expressed outrage about Kentucky legislators who apologized after using the infamous Antisemitic epithet “Jew them down.”   How is it possible that elected officials freely use such vile language?  And if they can, why should we expect anything more from students who download Mein Kampf in their classrooms and run around a soccer field shouting “Heil Hitler”?

A surge of Antisemitism hit university campuses across the United States this week: at the University of Illinois, officials said they were investigating Antisemitic flyers; The University of South Florida was forced to release a statement on Antisemitic and racist behaviour by students after it found swastikas and social media posts that minimized the Holocaust; and New York University said it was “disturbed and outraged by the presence of a swastika drawn on the scaffolding outside one of our buildings.”

More disconcerting is an Antisemitic trend happening across the United States,  whereby hate flyers are being directly delivered to homes. In Parker, Colorado, residents found Antisemitic flyers on their lawns, placed inside baggies of rice to weigh them down. The general message reportedly is that “Jews are controlling the government and possibly created Covid and are controlling Covid,” said one Jewish resident who received the hate material.

In light of increasing tumult and the importance of further Holocaust education, we announced this week that AGPI will confer its International Award for Human Rights on Holocaust Survivor, Max Eisen.  This is the time when more Holocaust education is necessary and we must continue to lift our Survivors, while they are still with us.