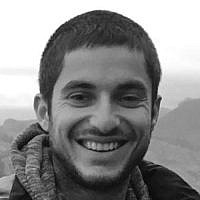 The Blogs
Eli Friedman
Apply for a Blog
Please note that the posts on The Blogs are contributed by third parties. The opinions, facts and any media content in them are presented solely by the authors, and neither The Times of Israel nor its partners assume any responsibility for them. Please contact us in case of abuse. In case of abuse,
Report this post.

President Joe Biden faced a dauting task. Facing the fury of Trump’s America, Biden tapped into the resources and spirit of his former boss’ underdog campaign. Though Biden was undoubtedly the most “establishment” candidate, he mobilized a grassroots army of activists who went door to door across America to ensure the brighter and more unified future he was promising. Then unlikely candidate, freshman Senator Obama, used similar strategies to engineer and inspire a grassroots movement that swept the nation and catapulted him into the White House. “The Audacity of Hope,” Obama’s Senatorial book, was a taste of the fire that fueled the nation into change; a slogan of hope, of promise and of change, embodied in the “Yes We Can” campaign.

This election cycle in Israel is more consequential than ever and it draws uncanny parallels to its recent American counterpart. After three failed attempts to oust Netanyahu from the center-left, an effort spearheaded by dovish former Chief of Staff Benny Gantz, the political leaders of Israel realized that a center-right wing country needed a center-right wing solution. Gideon Saar, popular Likud politician and Netanyahu-challenger, put on his batting gloves and stepped up to the plate. Saar assembled a host of new and old political leaders from the center and the right; channeling the spirits of Revisionist leaders Jabotinsky, Begin and Shamir, through candidates like Benny Begin, Michal Diamant and Dani Dayan; former Likud leaders such as Yifat Shasha-Biton and Zeev Elkin; and Derech Eretz MKs Yoaz Hendel and Zvi Hauser. While Biden and Saar, respective challengers to Trump and Netanyahu, are from different sides of the political spectrum, they share a common message of unity and stability, of which each of their nations are in timely and desperate need. To bring about winds of unity, Biden ignited a grassroots movement of hope. In his effort to oust Netanyahu, uproot the Israeli stagnation and restore national unity, Saar established a New Hope, Tikvah Chadasha, tapping into the currents who believe in the possibility of change.

Thousands of grassroots volunteers later, Saar is amidst a heated campaign to convince the nation to take a leap of faith and place their trust in him. He has been a central figure in Israeli politics for over two decades, successfully served in pivotal roles as both Education and Interior Minister, and most importantly, has the experience, character, ambition, and integrity to lead Israel into a new decade. Today’s challenges include combating the coronavirus and restoring a pandemic-stricken budget-less fledgling economy. But they also include re-establishing bipartisan relations with our American allies, restoring faith and effectiveness in the judiciary and law enforcement and reinstating a civil and dignified public discourse in Israel. While Saar has the experience and answers for Israel’s woes, and a vision for its future, the Obama-Biden movement has shown that the nation’s spirit must be awakened to bring such a vision into fruition. Hope must be channeled.

I had the fortune of joining this movement during its very infancy. After the third elections deadlock, Hendel and Hauser cultivated a national unity government between Netanyahu and Gantz, and in the process founded the Derech Eretz party. While I was running its national grassroots operation, activists signed up and founded branches throughout the country. We labored upon building a right wing, unifying, liberal and mamlakhti (statesmanlike) political and social grassroots movement. A youthful but mighty movement, undermined by the cynical attitudes of Likud lawmakers who hijacked the party that Menachem Begin built, it effectively put together a national unity emergency government, prevented summer elections through the “Hauser Compromise” and, with no budget in sight, chose to help dismantle the government. All with the nuclear power of two effective MKs.

Months later, this movement has found a voice. Taking the mantle of leadership of the right wing mamlakhti movement, Saar has mobilized thousands of volunteers, with branches springing up from Metula in the North to Eilat in the South; seasoned leaders lined up to change the direction of the Israeli ship; and a host of talented strategists vying to restore the stability Israel needs.

What Israel needs to bring about the winds of change is a right-wing, grassroots movement. An engineered center-left approach failed three times. Saar is the man for the job, with passionate activists and persons of integrity geared for the battle. As Gordis wrote regarding Saar’s ideological forefather Menachem Begin, this is “the battle for Israel’s soul.” What began with a nucleus of a few some 8 months ago with the formation of Derech Eretz, is now bearing fruit as an army of many, geared to turn the page for Israel and bring about a New Hope.

About the Author
Eli Friedman recently finished his IDF service and is now pursuing Rabbinical and Academic studies in the Jerusalem area. Between studying for tests and running up the hilly streets of Jerusalem, he enjoys writing about the Halakhic and political issues facing the Jewish people today (and about philosophical and contemporary topics in general, too).
Comments